Soft Hackle & One Trout Plus A Great Find. 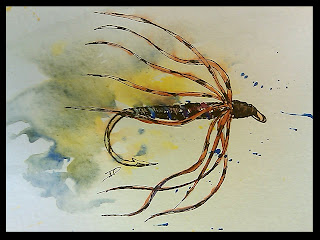 A fly inpired from  HOMEWATERS FLY FISHING Check his flies out.  He has a great eye for shots and make sure you tell him who sent you.
So here is the fishing report I haven't been able to post for 3 days now.  After a night of accompanying my wife on a madness Friday shopapolusa (some things one just has to do as a husband) I dropped her off at home to get some much needed sleep and I packed up my car and headed north for a morning of much anticipated trout angling.  I knew the front might have already ruined the chance for a killer day but I felt I deserved the chance to hook some wild trout.
With my trusty 2 w and box of midges I made my way to a stretch of river I have wanted to fish for some time but was always hesitant due to the multitude of NO TRESPASSING  signs along its banks.  Having heard numerous reports of locals brandishing firearms and even taking pop shots at fisherman in the water they claim to own, I searched for an access point and finally found one near a public road.  Unfortunately it only afforded about fifty yards of un-fishable shallow water and not surprisingly it produced nothing in the half an hour I struggled to fish it.  It was then that I got back into the car and was about to pack it in and fish some water I always fish when I passed a stretch of heavenly looking water that ran through a picture perfect pasture. 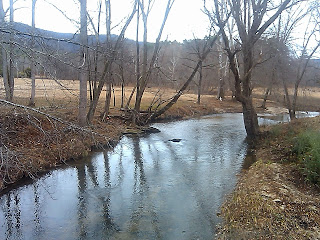 I have envied this stream for a number of years but have always written it off as NOT TO FISH under penalty of a mess of holes being put into the tail end of my waders about the size of 22 bullets rounds.  However on this drizzly morning as I drove passed I witnessed the owner cutting brush near the entrance.  I then drove on for about half a mile then promptly slammed on the brakes, did a uturn, and made my way back to go and ask how he felt about fly fishermen on his stretch of water.  What I got was one of the nicest receptions one could have possibly hoped for.  He graciously gave me permission to fish all the water on his stretch of river and feeder streams.  His son then  drove over and gave me a few good hints as to where the fish were holding.  As you can see by the shiner below, the day didn't start off with a bang and it seemed like the passing front had driven most of the trout into hiding. 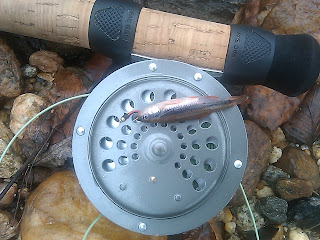 After about two hours of chucking flies and not catching a single trout I began to work my way back to the car.  It was then that I saw a mess of trout holding in some swift water along a cut bank and near a submerged tree root.  I tossed them a nice rendition of a soft hackle and got a tell tail flash of a take from deep.  My 2w easily hauled this little guy in and I decided it was enough for the day.  I released the little guy, gave my deep felt thanks for the privilege to fish such beautiful water and headed home. 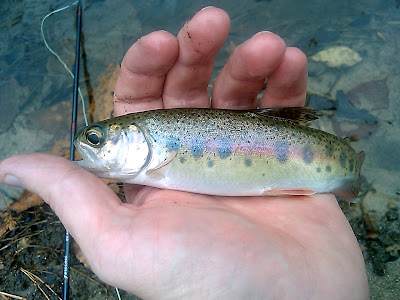 In the end the owner gave me his number and told me I was welcome back anytime.  It was a joy to find a friend of the angler and if he or one of the three generations of family members that work his land visits my site, I want to thank them again.  I will be returning to this pleasant stretch of river on a more weather friendly day and hopefully be able to hook into some good sized rainbows, of which I know are in there because I caught a glimpse of a few deep in a whole, right where he had said they were.
Posted by Unknown at 7:37 AM

Great report and what a deal you struck with the land owner, I can relate to the private access deal around here as well. Here, the law states that you can not, touch the stream bead. The landowner owns the rocks on the bottom of the river but not the water, so you can float but not stop. In 40 some miles there is only about 3 miles of public, the rest you have to get permission or take a shot gun full of salt rock in the butt.

Glad you had a good day Joel!

Nice story. I remember many times driving around debating whether to stop or not to get permission. Never got turned down.

Thanks for ther comments guys. It would be hard to float this stream because it is so shallow so I am glad I stopped and asked to fish on this guys land.