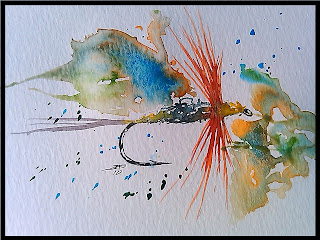 Sometimes a fly takes a backseat to more important info.  I have been meaning to post this for a while now and just recently got the chance with the actual presentation taking place last week.  This past summer I met a very close family member of Staff Sergent Giunta at a reunion and heard his amazing story.  I had heard that he was probably going to be a winner of the Medal Of Honor and being a student of history and all things military, I was very impressed.  No living servicemember has received such an award since Vietnam so THIS IS A BIG DEAL!!  I read his story and I get chills.

Visit this site per US Army - A Great Site.
or
the White house press release
Photos are from a friend of mine 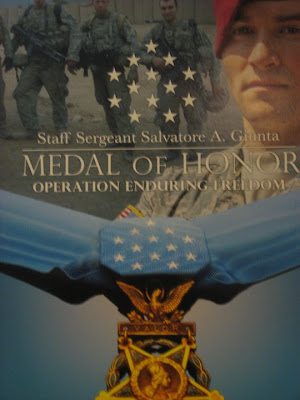 Official NarrativeOn Oct. 25, 2007, Spc. Giunta’s platoon was conducting a movement to contact to interdict enemy forces on the Gatigal Spur, in order to provide over watch for 2nd and 3rd platoon’s exfil back to Combat Outpost Vimot, and the Korengal Outpost. While conducting their exfil from the platoon’s blocking position, Spc. Giunta’s platoon was ambushed by 10 to 15 enemy personnel who utilized an “L” shaped, near ambush that was within 10 meters of the platoon’s main body. The enemy fired 10 Rocket Propelled Grenades (RPGs) and three PKMs (machine guns) from the apex of the ambush and additional AK-47s from throughout the ambush line.

The enemy initiated the contact with an RPG and a burst of PKM (fire), which immediately hit and wounded two members of the lead team, Sgt. Brennan and Spc. Eckrode. Another RPG in the initial volley hit extremely close to Spc. Giunta’s position. While Staff Sgt. Gallardo moved back to his Bravo Team to get situation reports, Spc. Giunta provided covering fire by leading his team in suppressing enemy positions, assigning sectors of fire and commanding his M-203 gunner to engage close targets. While advancing toward Spc. Giunta’s team, Staff Sgt. Gallardo was struck in the helmet by an AK-47 round, which caused him to fall to the ground. Despite being under heavy fire by PKM, RPG, and small arms, Spc. Giunta immediately left his covered position in order to render aid to his squad leader. As he moved to provide assistance, Spc. Giunta was struck by two bullets; one of which impacted his chest area but was stopped by his Enhanced Small Arms Protective Insert (E-SAPI) plate, and one round which impacted the Shoulder-Launched Multipurpose Assault Weapon-D (SMAW-D) rocket he was carrying across his back. Without hesitation, Spc. Giunta recovered from the impacts and ensured his squad leader was not injured. He then began bounding his team forward in an attempt to maneuver on the enemy.

Spc. Giunta and his fire team were quickly pinned down by effective enemy machine gun and small arms fire from multiple positions at close range. Spc. Giunta, along with Pfc. Clary and Staff Sgt. Gallardo, quickly prepared fragmentation grenades and continued the assault by throwing two volleys of them at enemy positions that were approximately 15 meters to their west. They then assaulted forward through those positions, secured Spc. Eckrode, and began treating his wounds. Realizing that Sgt. Brennan was missing, Pfc. Clary and Spc. Giunta continued to push forward along the enemy’s ex-filtration route, despite taking small arms fire from enemy personnel who were attempting to cover their withdrawal. Moving in the lead and rapidly closing with the enemy, despite receiving effective fire, Spc. Giunta overtook two enemy combatants attempting to drag off Sgt. Brennan, who had been incapacitated by his wounds. Spc. Giunta engaged one enemy combatant at close range and killed him, which cause the other enemy combatant to drop Sgt. Brennan and flee. Spc. Giunta then began immediate first aid on Sgt. Brennan, and also helped his squad leader to adjust security, further consolidate casualties, and prepare for Medical Evacuation operations.

Spc. Giunta’s selfless actions and personal courage were the decisive factors in changing the tide of the battle, ensuring that Sgt. Brennan was not captured by the enemy, and preventing the lead fire team from being destroyed by the enemy’s near ambush. Despite bullets impacting on and around himself, Spc. Giunta fearlessly advanced on the enemy and provided aid to his fallen comrades. His actions saved the lives of multiple paratroopers and changed the course of the battle in his platoon’s favor.

For exceptionally valorous actions during Operation Enduring Freedom VIII while assigned as a rifle team leader in Battle Company, 2nd Battalion (Airborne), 503rd Infantry. Spc. Giunta’s unwavering courage, aggressiveness, selfless service, and leadership while under extreme enemy fire were decisive in his platoon achieving fire superiority, defeating an enemy near ambush, and preventing the capture of a fellow paratrooper by the enemy. His actions reflect great credit upon himself, the Rock Battalion, the Bayonet Brigade Combat Team, Combined Joint Task Force-82, and the United States Army.

From the whitehouse.
This afternoon in the East Room of the White House, the President presented the Medal of Honor for conspicuous gallantry to Staff Sergeant Salvatore Giunta, U.S. Army -- the first living servicemember from the Iraq or Afghanistan wars to receive it. "Now, I’m going to go off-script here for a second and just say I really like this guy," said the President to laughter and applause. "I think anybody -- we all just get a sense of people and who they are, and when you meet Sal and you meet his family, you are just absolutely convinced that this is what America is all about." 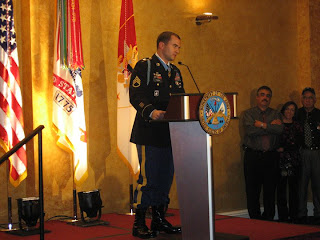 As an American I am proud of this guy as should every patriot.  I know this story got just a short play time on TV but I believe that it deserves a bit more.  It is inspirational, inspiring, and the epitome of what an American Hero should be.  We need more men like this and more coverage of these hero's of ours.  I wish I could impress on everyone how important this award is but all I can do is impress it on my own followers and hope you share it with all you know.
Posted by Unknown at 6:11 AM

A wonderful story and another reason to say Thanks!