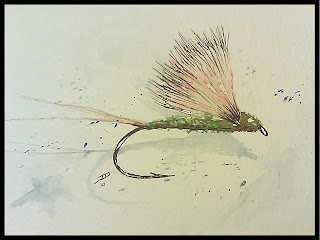 PMD Comparadun is a great little hair wing & I enjoy this fly
On another subject - When lighting your fireplace for the first time FIRST CHECK TO SEE IF A CRITTER HAS TAKEN UP RESIDENCE in the flu.  The other day I thought I'd light up the fireplace in preparations for the upcoming season.  I had noticed a few wasps flying around the chimney during the day so I thought I'd clean out the pipe with a good burning fire and smoke the little guys out.  Last year I didn't do this and in January, when I opened the damper, I had a good dozen or so angry wasps come at me.  So to eliminate this problem I lit a good fire then heard something bigger than a few small insects scratching metal in what sounded like a desperate attempt to evacuate.  Moments later I heard the tell tale sound of a chimney on fire.  Rushing outside I witnessed a large four foot flame engulfing my chimney.  Five minutes of scrambling with ladders and a water hose up on a two story roof and the fire was out.  Post fire inspection showed that a squirrel had taken up residence in the cap of my chimney.  All you PETA people rest assured no squirrel was injured - they got out in time - but their nest was a smoking bunch of embers.
Long story but a good lesson learned - check your chimney before lighting up.
Posted by Unknown at 7:13 AM

Dang Joel,
way to act fast, lucky you were on top of it,

That's crazy Joel - I bet that was 5 minutes of chaos!

It was an exciting few moments. Thank goodness my budy was able to lend a hand.