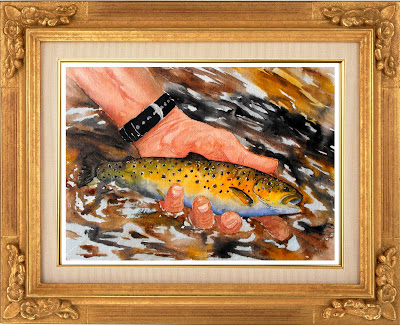 Here is my latest painting called the "April Brown".  Taken from a picture I took while on my last fishing trip to a stretch of river in the foothills of South Carolina.  It, of course, is a watercolor that is about 11"x14" in size and as with most of my other paintings, it is for sale.  Just email me for purchasing information.  Rest assured that all proceeds will go to feed my fishing addiction.  And if you can not afford the original, prints are also available.

I would also like to take a moment to talk about stream side etiquette.  I would suspect that most of the anglers that visit this site on a fairly regular basis already abide by set of un-written rules while fishing a small stream but some times these rules need to be put down into the record for the few that do not already know them.
I would like post just a one of these rules of mine for the record.
Don't Stand In My Pool While I'm Fishing IT!!!! 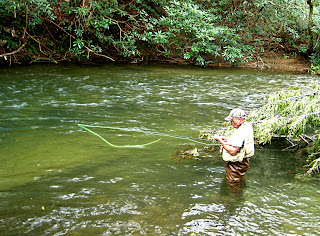 Seriously, my brother and I are the only two on the entire stretch of river for a mile and this guy (who is old enough to know better) walks up, does a bit of small talk and then slides into the stream RIGHT NEXT TO ME!  Where he is standing is where I caught three fish about two minute before he showed up.  WHO DOES THAT?  I honestly just stood there for a minute and stared at him then I cast over him a few times to see if he got the point.  Short answer...Nope.
Disgusted I made a point of letting him know that there wasn't enough room there for the two of us and I moved down stream.  After all the fish where biting all over and not just in this pool.
My brother on the other hand decided that a point needed to be made and he took my spot and hassled the guy for quite a while longer.  He still didn't get it.  Really I am just at a loss.

And one final note,  This guy might look like he is tying on a fly but he is not.  Yes it is a fly rod with fly reel and fly line but that thing he is tying on is not a fly, a nymph, or a streamer.  Its not a jig or a spinner either.  Nope, this guy is squashing on a big lump of POWER BAIT.  He then proceeded to gut hook a lot less fish than I was catching on a fly.  Bait does have its place in fishing and I have used it on other fish and you can call me a snooting fly fisherman, but it does not belong at the end of fly line.  Esspecialy when the fish will bite on anything you throw in the water.  And then you wait for the fish to completely swallow it before you set the hook?  Again I am at a loss.  I guess you can't fix stupid.  Please people, take a lesson from the idiots of the world.  Don't be this guy!
Posted by Unknown at 9:05 AM

Funny you wrote about a guy jumping into your spot...I ran into the same thing last week. But you said it, "you can't fix stupid"

I'm amazed at how out there some people are. I have let numerous people join and have turned down many offers to join others. It's simple - just be polite and ask.

Painting of course, is fantastic as always.

However, the jerk is not. You'd be surprised by how many of types are out there. Dustin is friendlier to them than I am. I let them know about it.

I am at a loss on the powerbait...i didn't even know people used that with a fly rod. Weird.

Glad you had a productive day despite the idiot.

Hi,
I just came across your blog today. Those are some great paintings. I have had the same problem before, here in Wisconsin. I have had many a hole ruined by people having no etiquette whatsoever. It would go to figure he is using PowerBait. I am sure he would keep a huge beauty to eat, instead of a couple of small ones. Some peoples kids...sheeesh

It really all depends on what you know. Maybe this guy has only been fishing a little while. Maybe he's only fished in heavily stocked streams where it's elbow to elbow? Maybe it would have been a good time to politely ask him why he chose that particular spot? He might have said " well, I saw you fishing here so I figured there must be fish here" and you could have gone on to explain to him that it was rude to jump in the same run or pool with another angler - at the very least without asking.

Some people are just total jerks. And some just don't know any better. It's up to us to educate the ones that can be educated and ignore the jerks that don't care.


Growing up we fished with flyrods with bread, crickets and worms. It's no sin.

I thought I might spike a few comments with this post. I should have mentioned that this guy did not come alone and his buddy saw me and my brother fishing this bend and politely moved on. I also have no problem with the powerbait fishing although doing it on a fly rod was new to me. As I said I have used it before and it does serve a purpose but I did take issue with his style of hooking them in the gut, especially when the clear water allowed one to see the take.
In the end I figured that I would just move on since the entire river was still available. No since causing a fuss over a discourteous angler. Hopefully his fishing partner schooled him on proper stream-side behavior but as I said before.... This guy was old enough to know better. Thanks for all the comments.

Well, I'm late to the party but I thought I would throw my 2 cents in. Joel, you're right, if he was old enough to fish on his own he was old enough to know better. Also, ignorance is no excuse. He's also the guy who tailgates, passes on the right, blows through red lights and says, I only drank a couple of beers...it didn't affect me at all...to the arresting officer. If he falls in, I'll throw him a treble hook. (Sorry for the rant.)

What a clown. Cofisher summed up my thoughts pretty well.