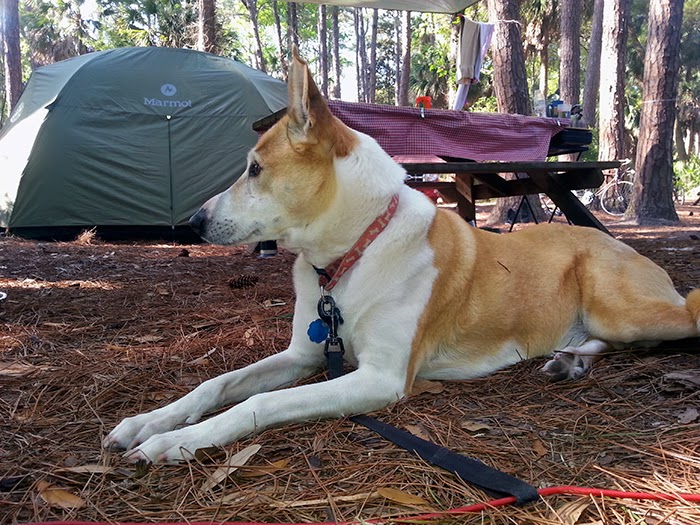 I recently returned from a great week long camping trip with the family and thought that I'd do a gear review on a piece of equipment that has seriously blown me away.  First off - to all those that follow my blog strictly for the fishy posts - I did try to do some red fishing but the constant 30mph winds and downpours of drenching rains real killed that idea. 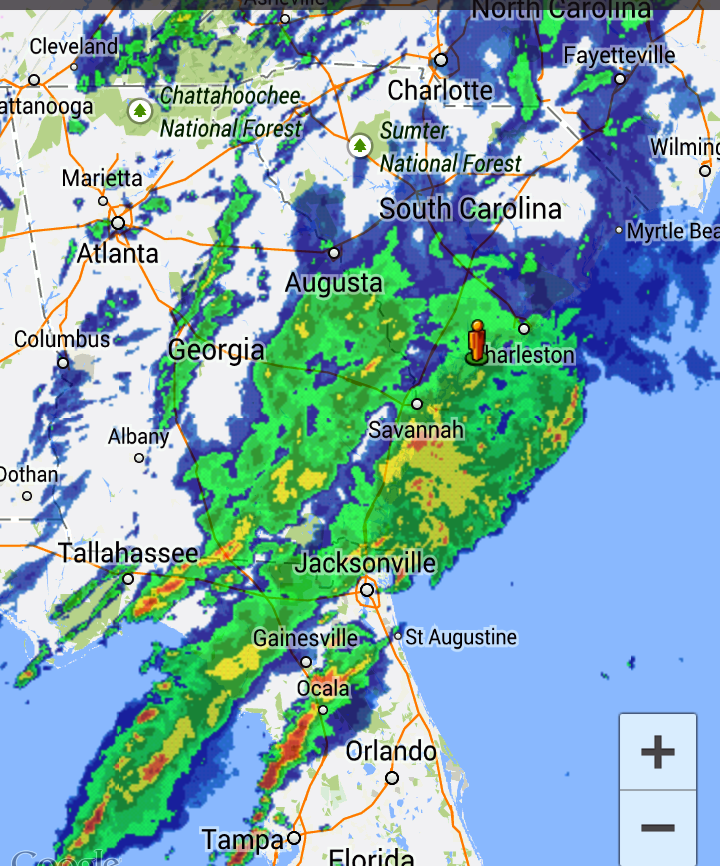 Looking on the plus side however, the rains and chilly winds that battered the coast over the five days that the family and I spent camping allowed for some great family bonding.  It also allowed us to thoroughly test out the new Marmot Limestone 6 Tent and boy did it get a test.
Our last tent was a Target special that had served us for the better part of a decade but for the last two years my family and I discovered that in rainy weather it was little more than a water collection device.  On our last adventure to the hills in the upstate of South Carolina we had so much water in our tent that our sleeping bags acted as gigantic sponges and we all braved a restless night only to awake and find we all had an epedimic of trench foot.  Only a good two hours near the fire allowed us to again become functional humans 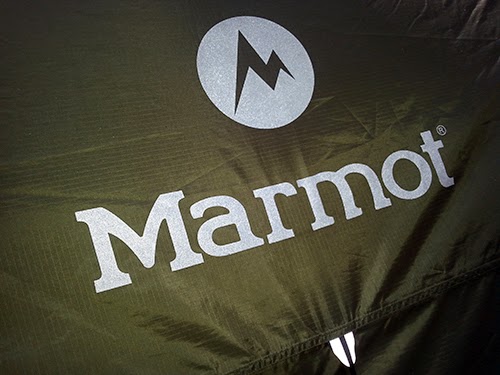 That is why when my wife and I saw that REI (An outdoor store we love) had a Marmot Limestone 6P for sale, we jumped on it like a tick on a hound dog.
(Incidentally, for those camping on the Carolina coast, or any heavily wooded area, ticks are a real serious hazard.  Just ask my poor little boy who got a few - including one on a place no male should ever have to use a tweezers... ouch!!)
Anyway... The Marmot Limestone 6 person tent came in two colors; the traditional o.d. green and the new bright orange.  Being a guy that doesn't necessarily like to be a beacon in the woods for every passerby, I opted for the green but the orange is still a sharp looking tent. 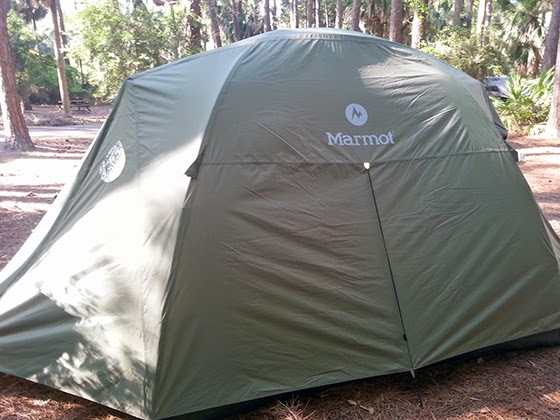 The setup was ultra easy, with two main poles and two short struts that slide into fantastic rod socks on the outside of the tent, it all came together in a few minutes.  The rain fly also was literally a snap as it hooked directly to the main tent at the anchor points.
Once the tent is set up, we went in and were completely blown away by the space we had.  Our last tent we could barely stand up but in this baby there is just about enough headroom to put in a ceiling fan. Another feature we really enjoyed was the added vestibule in the rainfly for keeping hiking shoes and dirty sand shoes dry before we got into the tent.  With the onslaught of rain we had, this little feature got plenty of use.  Nothing is worse than mud and sand on the floor of your tent and this nice addition allowed most of the dirt to remain outside.  As anyone who has ever camped with kids knows - this is no small accomplishment.
As for the tent handling the rain - all I can say is that it did its job way better than I would have expected.  In fact, not a single drip of moisture ever fell from the rainfly or seeped in from the sides or floor.  On one of our days it rained so HARD that even the tarp we had spread over out picnic table leaked on us, the Marmot Limestone Tent however- which was fully exposed to the 30mph winds and rain - repelled the water all day long.  When we went to bed it was awesome to find our sleeping area bone dry.
Simply put - the Marmot Limestone 6P Tent is a fantastic rain proof shelter I would recommend to anyone! 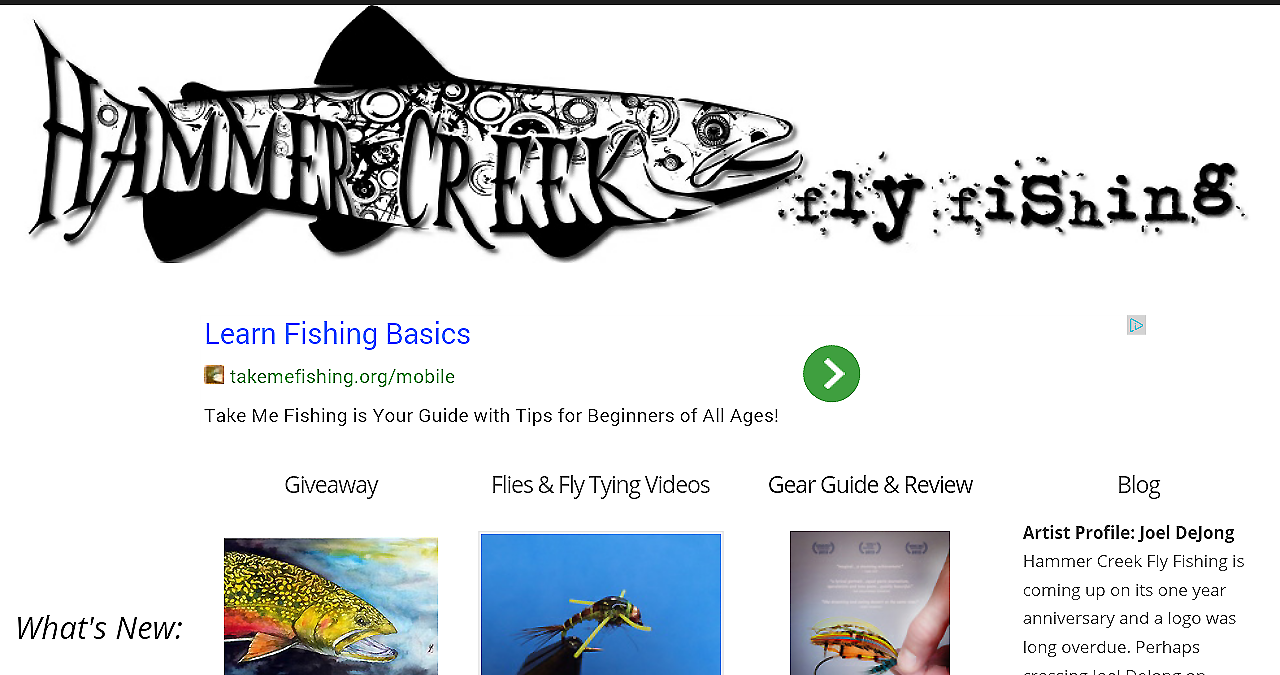 So you missed my last art contest, no worried because thanks to Hammer Creek Fly Fishing you now have a chance to win yet another piece of fishy art from www.Hexfishing.com.  All you need to do is click over and enter to win - extremely easy only you better hurry!
While you are there check out the interview Kyle did of me.  It was a flattering experience to be asked to comment on my art.  Doing my best not to sound like a complete idiot, I answered a variety of question on both my art and my life. 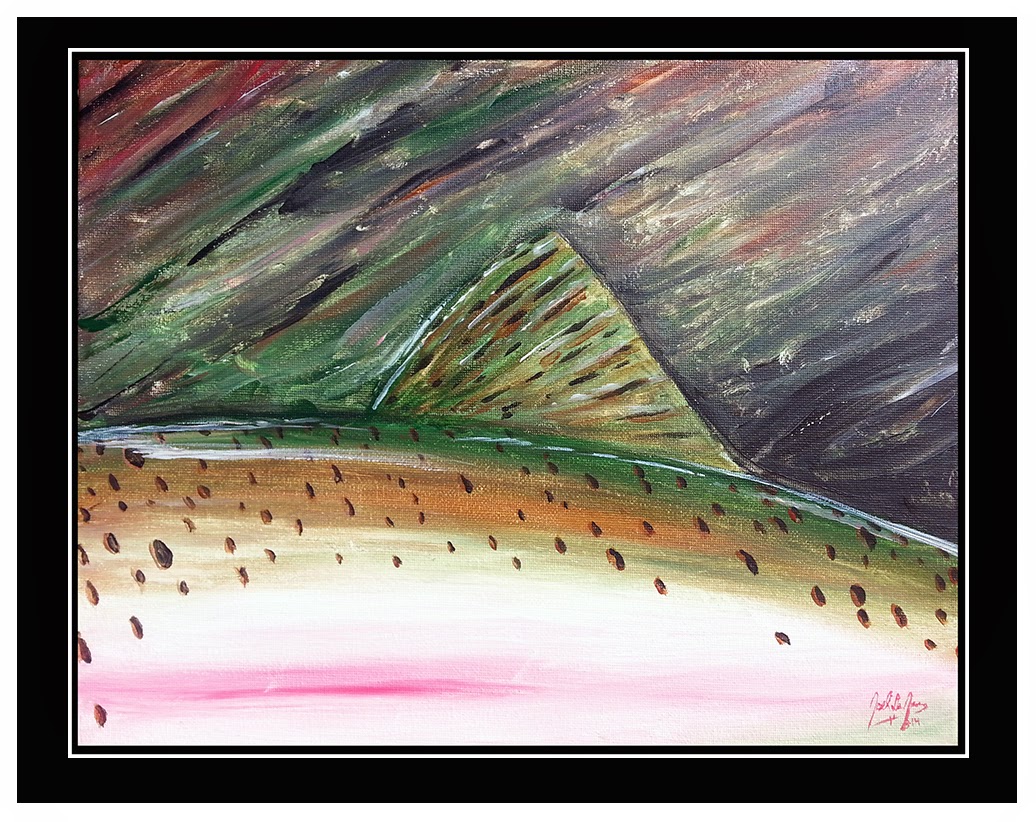 Congratulations to Gidgett Andree, who entered the contest via Facebook, for winning the 'Rainbow Fin' painting.  All entries from the G+, this blog, and facebook where giving a random number and then with the help of Random.org - a winning number was selected from the digital hat.  Thanks to all of you that entered and rest easy, there will soon be another contest up for you to enter.  Congrats Gidgett.
If you are not following Hexfishing on Facebook by now - click over and get connected.
Posted by Unknown at 8:39 AM No comments: 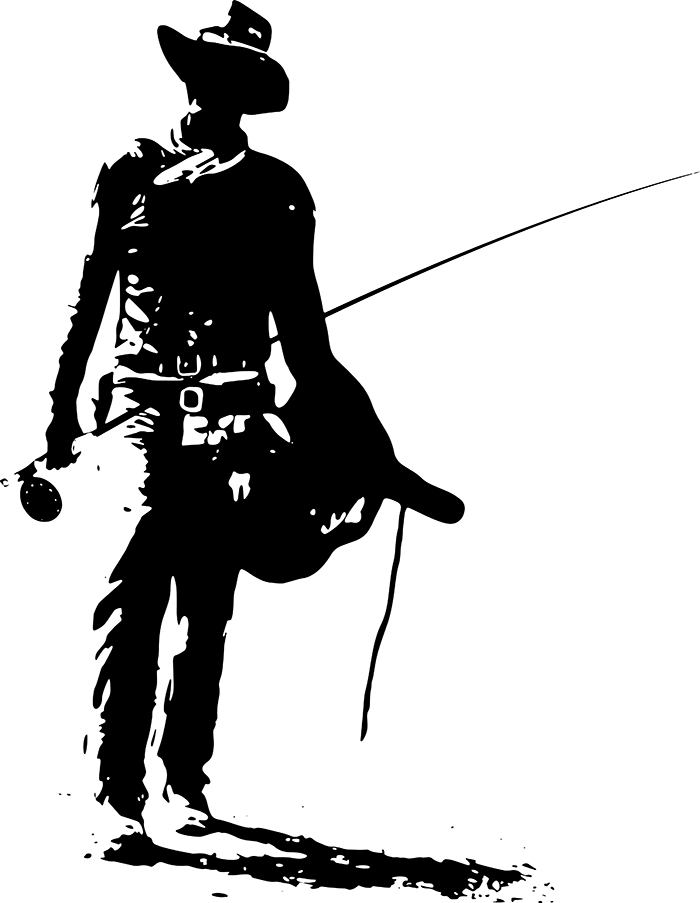 Do you need another reason to pick up a fly rod? 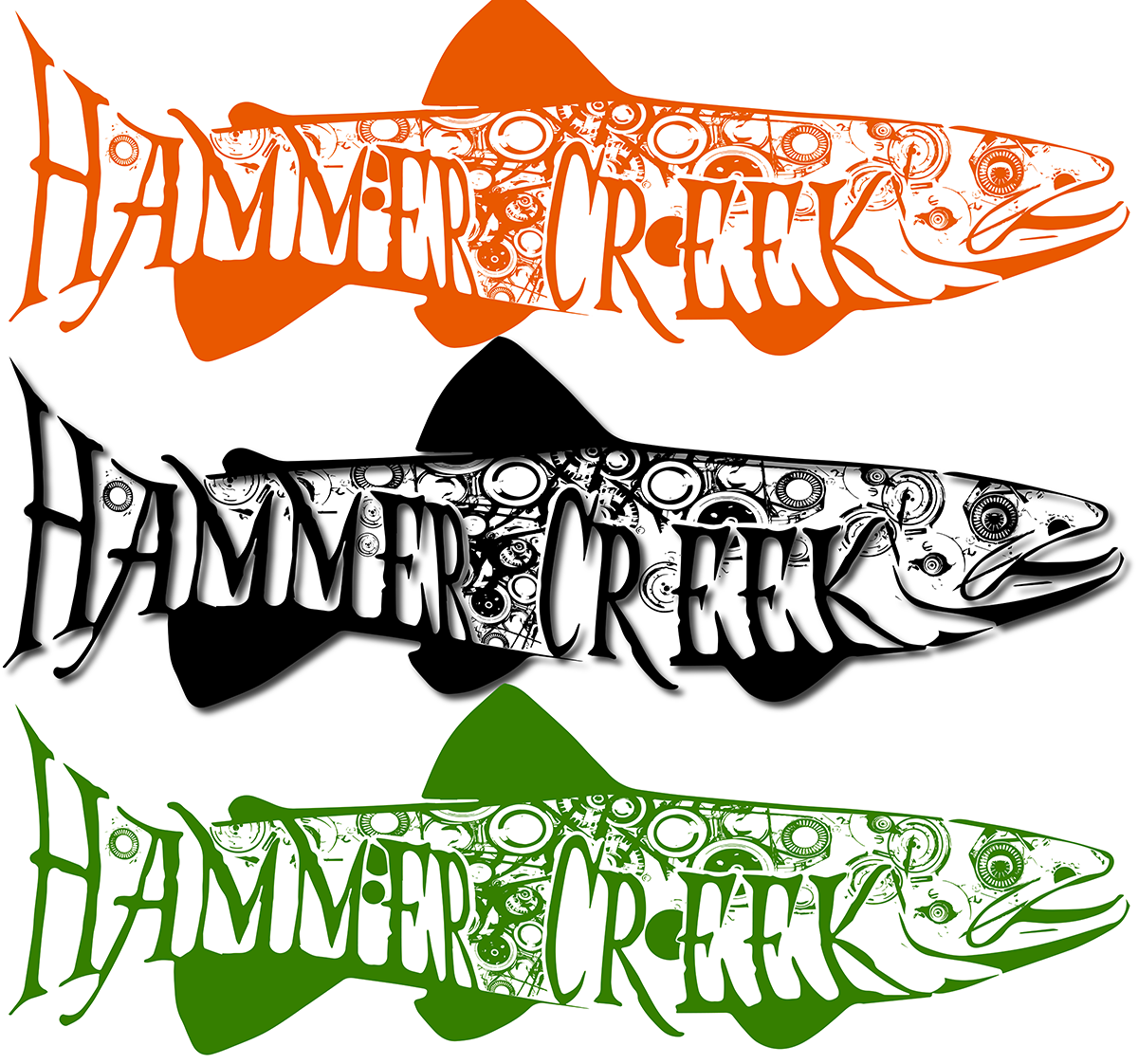 If you are like me then you enjoy discovering new and interesting sites that can be used to further your knowledge in the art of fly fishing.  Hammer Creek Fly Fishing is one of those sites you are going to want to bookmark. Not only is it extremely well put together and organized but it has an extensive library of original fly tying videos that are top notch.  For a guy like me that is always consulting youtube for tying advice, I strongly recommend bookmarking this great site.
Kyle, the owner of Hammer Creek, has a love for fly fishing that has driven him to create this site and so when he asked me to come up with an original logo that would stand out beyond the hum of all the other sites, I jumped at the opportunity.

Starting with the name and the industrial feel of the site with its great photography and black and white imagery, I began to explore creating a unique trout logo with gears and a eye catching appeal.  All told I think we went through about four solid revisions until we settled on this highly original logo.
One element incorporated into this design that you might find interesting is how I created the gears.  Using the accessories end of a Chevy small block as inspiration I was able to cobble together a very intricate set of gears and flywheels.  Its not your typical spots on a trout but I think it sure gives the logo that rough industrial feel we were going for.
Click on over to Hammer Creek Fly Fishing and tell Kyle hi.  Check out his videos and follow his blog.  You wont leave disappointed. 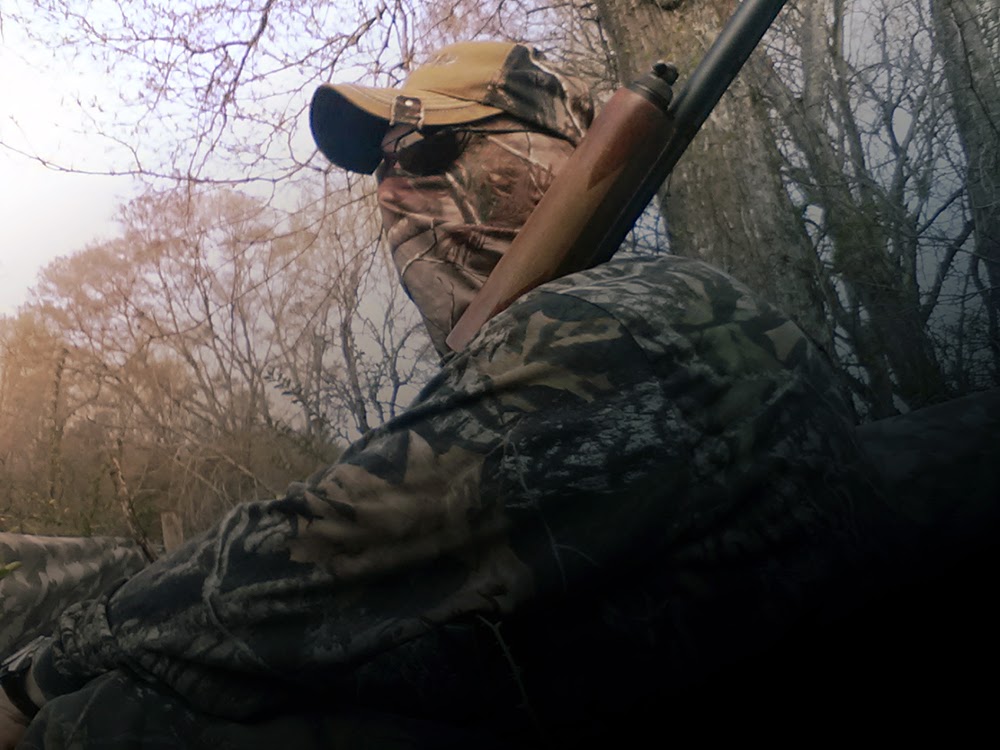 I went out this morning with the intent to bag some turkey but as with most of my hunting expeditions - I left empty handed.  I have been trying to get a turkey for the last three years to no avail and I have come to the conclusion that Ben Franklin was right; the turkey is one of Americas wiliest birds. I might not agree with his idea to make the Turkey the national bird - I believe the Eagle is doing a fine job - but It sure is a difficult bird to hunt.  Either that or my disgraceful turkey call need a lot of work. 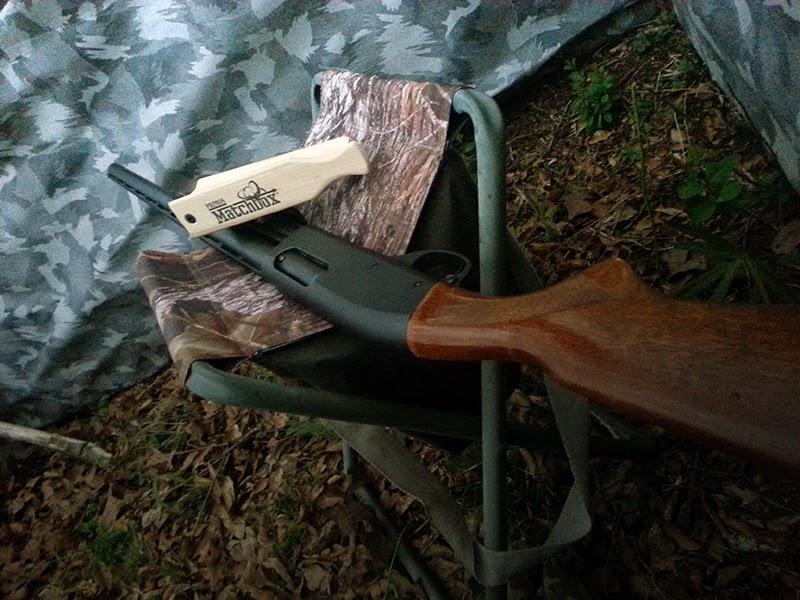 So with the temps rising into the 80's and it becoming abundantly clear that the birds had returned to their roost, My buddy and I left our respective blinds and strung up the rods.  Luckily for us there is a two great ponds on the property loaded with bass.
Today I left with nothing under a 1.5lb bass to show for my efforts and every single one was caught on a top water bass popper I carved from wood and hand painted.  It was truly a rewarding feeling to see this #1 bass bud I carved be attacked by numerous large mouth bass.
So I might not have bagged a bunch of feathers but at least I didn't leave feeling like a turkey. 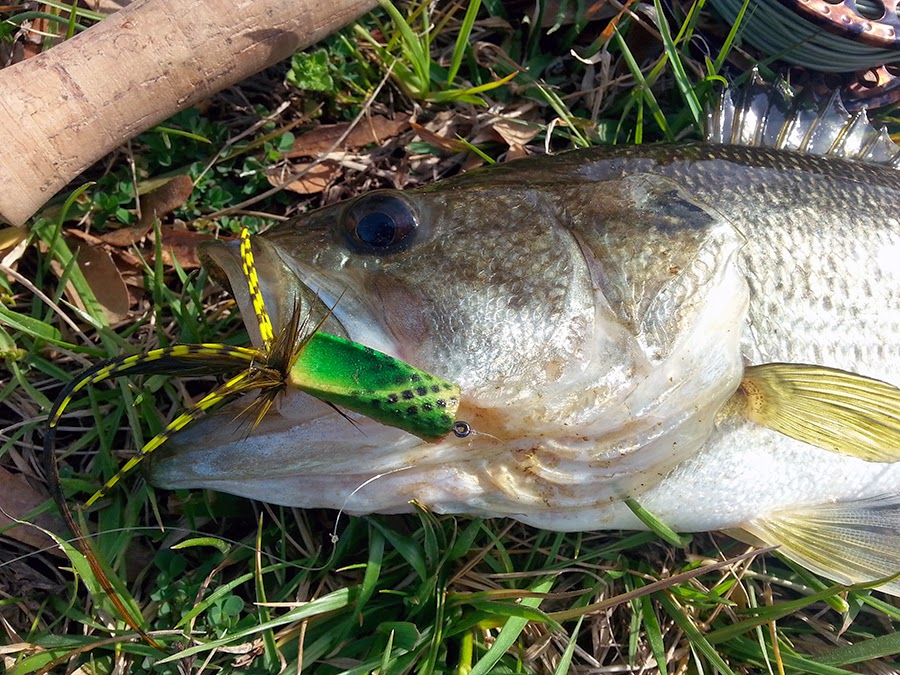 I need to make a few more of these because unfortunately this one was lost at the pond. 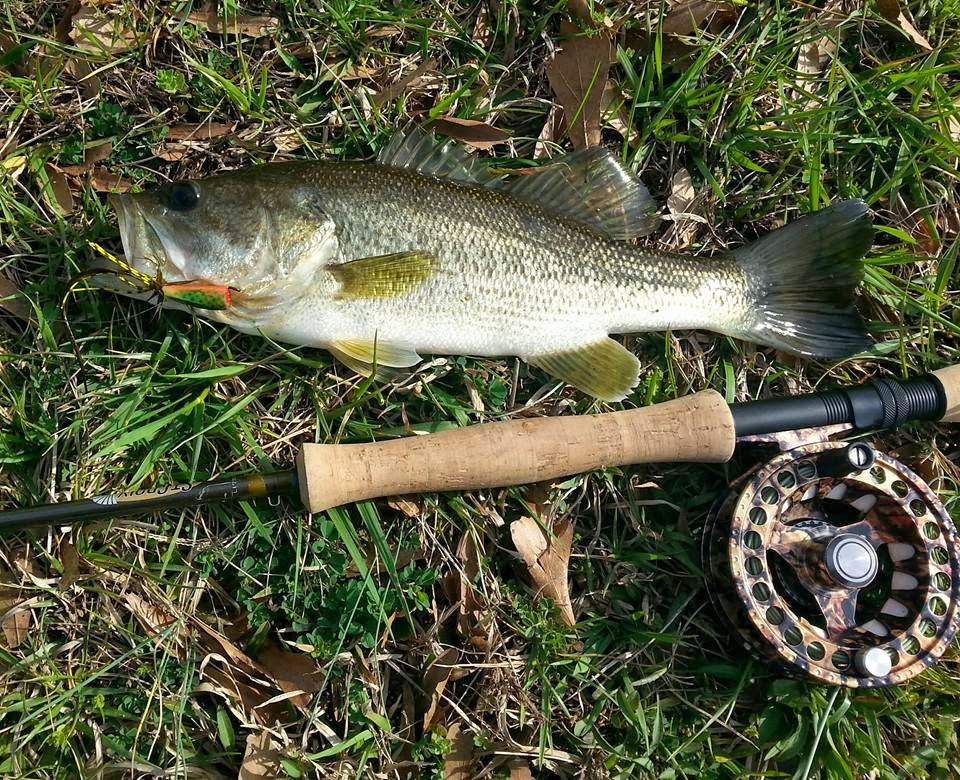