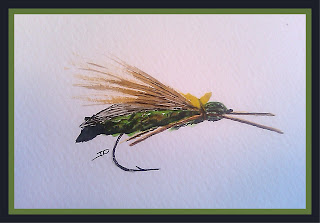 On a little trip up to the Chicago land area I was lucky enough to slip away for a little bit and do a bit of fly fishing in a SMALL pond near my brother-inlaws house. I had brought with me my 2 weight 6 1/2' because its compactability and because I knew nothing up there would be that big. I only brought along a few flies and very limited gear but it was enough for my purpose. Day one I caught a good pan fish on every cast with a small foam beetle but could not entice a large bass to hit anything I threw at it, (including my rabbit strip). I guess there is very little that will get a nesting bass to move off a bed if it doesn't feel like it.

Day two I caught a TON of small but feisty large mouth and crappie on a blacknose dace variant I made that had a little green marabou for an overwing. On day thee the cold high pressure system moved in and only a few panfish were enticed to leave the bottom of the pond.
Over all it was a good little trip for visiting family and a few hours of relaxing fishing. I even got to give my father-inlaw a bit of fly fishing instruction which would have been better if he had hooked a fish but he only arrived after the high moved in and the fish quit biting.

The pictures I posted are only a taste of the action. Some were bigger, and many were smaller but for the most part the action was nonstop.

looks like a fun little time!!! way to go on getting the rod in your in-laws hand... that largemouth is pretty nice... bet the 2wt had a sweet curl... what is the tiger looking fish? looks like a largegill a cross between a largie and a bluegill.

Pond fishing is a blast - there's something about it that's less intense (and in many ways more enjoyable) than getting out on a trout stream. Looks like some nice variety in there, well worth the time spent.

yeah a few of those bass doubled over the old 2W and put up a good fight. As for the tiger looking fish I believe it is a crappie but might be a warmouth - I'm not 100% - but my avid warm water fishing brother inlaw says its a crappie and I caught a bunch of those.

Troutrageous,
Small ponds realy have a different feel. Less of a mission and more of 'just dropping by' feel. Very relaxing. Trout fishing is still an intense experience I absolutly LOVE>