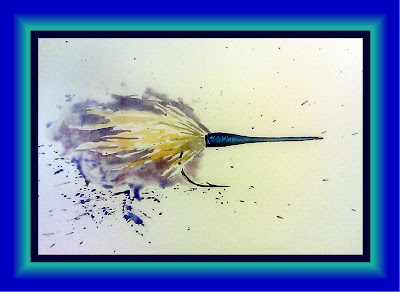 ORIGINAL SOLD
Here is a simple Tarpon Fly. Tarpon are a life lister....., along with about 40 other types of fly fishing.

Picking up my favorite author the other day (E. Hemingway) I began to drift through a few of his early magazine and newspaper articles, many of which were later developed into his best novels. The Old Man & The Sea, The Sun Also Rises, Farewell To Arms; you get the idea. So as I read these time capsules of life I was instantly tela-ported into the Spanish mountains fighting bulls and fascism, hunting u-boats and marlin out of Cuba, and best of all battling heavy shouldered trout in Canada and Wyoming. What is it about words that are so well written that they can pull you into an adventure so as to either make you feel you are there or wish you were. My hats off to those with that ability. They say a picture is worth a thousand words but sometime the words are more stimulating to the mind.

"Then he comes out again, and the spray roars, and again, then the line feels slack and out he bursts heading across and in, then jumps twice more seeming to hang high and stiff in the air before falling to throw a column of water and you can see the hook in the corner of his jaw." -On the Blue Water - Hemingway - Esquire April, 1936.

For any out there that have never picked up Hemingway, London, Zane Grey, Twain, or any other countless monumental writers, do yourself a favor. Like prospecting for native trout or tracking a noble buck through heavy brush, your time and efforts will not go unrewarded. (FYI - adding a drink of your choice into your reading will not hurt the experience...)
Posted by Unknown at 6:18 AM