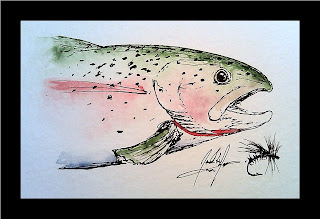 Just another free time sketching post. Added a bit of color to spruce it up but nothing to special.

Also here is a bit of my thoughts I decided I'd share so bare with me. I am a fan of good one liners and good quotes. In one line a person can impart so much without waisting excess words, and sometimes the one liner is just so plane funny that they can carry you through the day. For instance I once worked with this old man when I was a kid that was a master of the one liner. We would be bailing hay for three,four hours strait in 100deg plus heat and the old guy wouldn't say a word then out of the blue he would stop, look you dead in the eye and impart the years of learning on an impressionable young mind on a subject that had absolutely nothing to do with the task at hand. It wasn't any profound insite or meaning of life knowledge and to be honest I really can't repeat most of what he said but it was just so funny you never forgot it, and with a bunch of work left to do for the day, it was a one liner that would get you though many more hours of hard labor.

So with that in mind, here is a few great quotes a ran across the other day:


And coming from the Bigerrfish fly tying bench is a fly that is spot on to a bucktail red and blue streamer I posted a few days ago. One word for the coloring of the buck tail... Sharpie. It looks great!