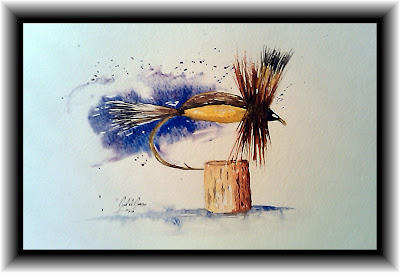 Alright, I know I've been slacking on the posts in the past few days but after over 200 plus posts I have still been able to keep my commitment to one post a day, one fly a day, for what has past in 2010. It is something I was not sure I could do and I am sure something a few of my friends and family raised an eyebrow at when I told them what I intended to do way back in December 2009. I guess I cant blame them after all I do have more than a few half finished projects out there as a testimony to my over zealous ambitions. - a half finished 19' sailboat being the most prominent reminder to all.

But I have stuck with this so far and it has been a rewarding experience. So far I have doubled my time on the water and at the tying bench, increased the knowledge one needs to hunt those elusive fish, improved my skills as an artist, and made a few friends along the way. In the next 100 plus days to come in this year I hope to continue this trend and with the help of you followers of A YEAR ON THE FLY I know I will.
For today here is a Yellow Humpy to make up for the few lack luster posts I have made recently. Incidentally I discovered that the inside of my camera lens was gooped up which has contributed to the poor pictures as of late.
Cheers.

No apologies needed, I've just been having fun checking in daily.

This collection would make one heck of a "coffee table" book when all is said and done.

Thanks for the support. I've had that suggested before and might just have to look into doing something like that as the year comes to an end. Until then I am just going to keep plugging away.

I have been here every single day exept for when fishing trips that last more than a day.
Have nothing but good things to say. your work is awesome and I look forward to your post day after day..

The Humpy is my favorite dry fly to tie. Just love the looks of it. Your paying/print would be amazing.