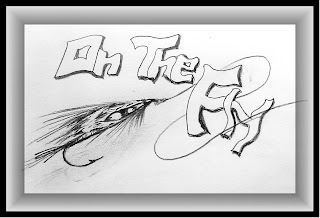 I took a little trip yesterday up to the first spot I learned to fly fish. Jones Gap State park is a great little park I am sure most of the residents in SC don't know about. It is a hidden gem, tucked back in a dead end cut between two foothills. It has Brooks, Browns, and Rainbows in it fresh clear stream and is crisscrossed with great hiking trails and waterfalls. I absolutely love this little park and it had been a long time since I revisited it. 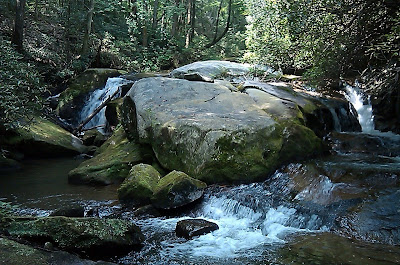 So the other day I packed up a my flies and 2w and hit these small waters hopping to hook into a few trout. It has been quite warm lately so I had figured that the fish would be hiding in the few deep holes down in the park, or more likely found their way to the colder waters further up.

What I didn't expect was just how far I would have to hike and scramble to find the trout.
At first the only fish I was catching were these little guys. I'm not 100% sure what they are called but I did know that when ever I see them on the end of my line in large numbers, the trout are usually somewhere else.

I continued to work my way up stream, pool by pool and cascade by cascade until I found what I was looking for. Tying on a new fly I made the day before (a variation of the Mickyfinn streamer), I tossed it to the head of the pool and worked it back to me, quickly enticing a rainbow to strike. Finally locating some trout after three hours of crawling over boulders and wading the streams.

I worked that hole until it was dry. In a place I remember only native brookies hiding, I found a few rainbows. These guys were a bit over a mile up from the parks main grounds and quite a bit higher than I have ever fished. What a great feeling to hook these native guys. I am sure that later in the year this spot will be full of native brookies. Please excuse the poor quality of these pics, my phone was not focusing correctly for some reason. Next time I think I'll bring a real camera.

Here is a few more pics of the parks main grounds.The first is the park admin office, a great looking facility,and the second is the renovated trout hatchery pond that was originally constructed many, many, many years ago. I Believe it was originally used in the twenties, don't quote me, and it uses runoff water taken directly from a feeder stream, gravity fed. 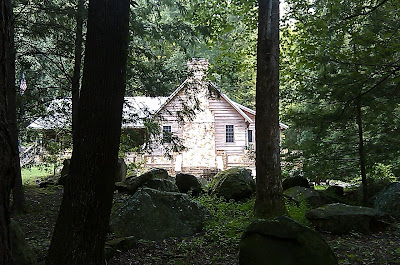 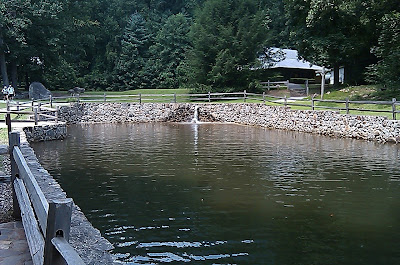 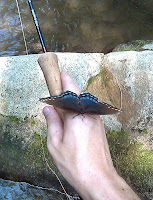 This guy landed on my hand while I was retrieving my fly and he just sat there like he wanted to have his picture taken. It was a great day and the amount of butterflies around the stream was amazing.
Posted by Unknown at 7:02 AM

Good looking fly, The Mickey Finn variation.
Do you have the recipe?

Sucker fish are ugly for obvious reasons. If trout dont want to be near them...neither do you. Nice pics. I am going to Alaska for work in a few weeks and will try to get out and catch a greyling or two for you to paint.