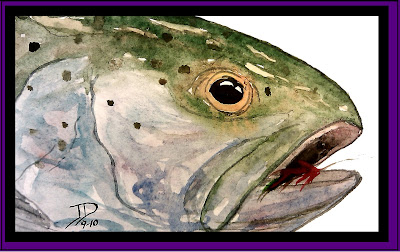 This weekend I was stuck working so no football, BBQ, or family fun. The good news is that my job took me to Traverse City Michigan. Why is this a good thing you ask, well only about 3/4 of a mile from my hotel is one of the nations best streams for fishing (or so I am told). 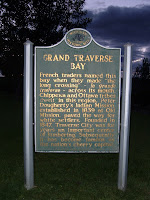 The Boardman runs strait through the heart of the city and is home to big trout, great lake salmon runs, steelhead, bass, muskie, and pike. As you can guess this gets one fairly excited especially if one has not been fishing in quite a while. So rigged up with the hopes of hitting big salmon coming in from the bay, I set out the other morning eager to hook into a monster.

Only one day to fish and I had only 2 &1/2 hrs for fishing if I got up before dawn, which I did - in the pouring rain and 60 degree temperatures and 30knt winds. I had not packed for this, what I had also not packed for was trout. I had only packed 3x tippet and big leaders with my 7w expecting big fish. What I didn't know, and further research would have showed, was that although the occasional big salmon does come in the beginning of September, they are not stacked in there.

In those early morning hours I shivered continuously, struggling to find a fly to prob the dark waters for fish I could not see, and struggling even harder to stop my fingers from shaking so I could thread the hook. I did get two bites of a streamer but no hook ups. As 8:30 rolled closer, I had to pack it in and made the call for the hotel van to pick me up. Cold and defeated I headed to work to pine the day away for another chance at those waters.

After work, and with the 7pm sun falling fast I quickly got my gear and headed back. 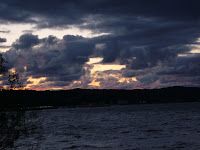 This time I was able to see the waters in a better light and only found a few small brown actively feeding the midge hatch. This would have been great had I packed my midge box. I'm not sure how it didn't make it into my gear bag, but it didn't so the over sized streamers had to play. an hour later I gave up and found a ragged caddis, tied it on and took a stab at trying to fool them despite the big tippet. Most of the over fished browns snubbed it but with a few cleverly disguised presentations I managed to hook into three smallish browns after much persistence.

So as the sun began to set and more storm clouds began to gather on the horizon, 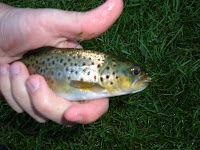 I packed it in and left as happy as a bum that just found winning lottery ticket. With big smile on my face I headed back for dinner and a quick daily fly post. You might say to yourself, Why is he smiling? No Salmon, only three small browns and near hypothermia, sounds miserable. Well for me it was a combined 5 hours of vacation that made work fly by. I caught fish and took everything mother nature threw at me to try to keep me in my room.
I went out and did it despite the hardship and came out victorious. I'll take those three beautiful browns any day over the inside of any hotel room or airplane or office building. 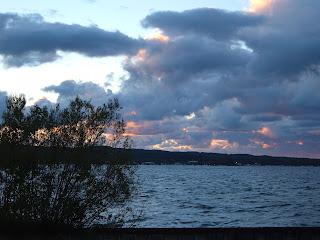 I'll agree with you.
Spending a few hours on a stream is a great tonic.

Years ago I was in sales. My trips took me to a number of places where I could fish in the afternoons. I made up a list of "fishing equipment to take on trips" and it seemed to keep me from forgetting certain things. Just a suggestion.

I really loved your blog. It appears that you have put a lot more work into it. I will keep your blog in my twitter so I can come back and see it again when it has some new information. Thanks a lot!

Right on man thats good to read that much, you not a big fan of typing but it is cool to hear your thoughts,,, good job and cathing fish with what you have, but dude your midge box?

Nice Report. I'd like to get to MI some day.

Thanks everyone for the comments. It was realy a joy to get out there and fish dispite the weather. I guess what I should've said was that I had a moment of stupidity an purposely left my Midges at home in a vain effort to save room and because I only had Big salmon on my mind. I also only carried some 3x with me which was also ill advised. Next time it 5x, 7x, and my midge box. I can make room.