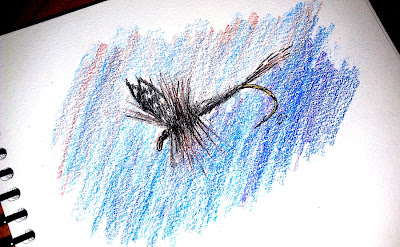 Sometimes the oldies are truly the goodies and in the case of the Adams Fly that assessment has never been more true.  Arguably the best known fly to originate in North America, the Adams Fly is the standard barer for all fly tyers searching to create that magic fly pattern that will be around long after their time on the stream has passed.  There is not a fly fisherman out there that hasn't heard of the fly, fished it, and I even venture to say caught something on it.
Originating in the 1920's from that now famous fly fishing region of the U.S. (Traverse City Michigan, a mecca for any fly angler) The Adams story is one often retold at the table of fly shops across the country and in countless books.  This little fly is so popular that there is even a monument placed near the place where it was created.  Seriously, Its own monument, that how successful this little fly is.  The inscription on the monument reads:
"In 1922, ardent fly fisherman Leonard Hallady created the first Adams dry fly near his home on the banks of Mayfield pond. He named it in honor of his good friend, Judge Charles F. Adams, another enthusiastic angler who loved to fish for brook and brown trout in the nearby Boardman River. The Adams combines brown and grizzly hackle; many trout anglers claim it is the best fly ever made. Some, in fact, declare that if they had to use only one fly for all of their trout fishing, it would be the Adams." 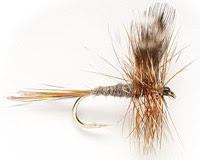 Over the years, as with all things that are successful, this little fly has been copied, altered, retied with newer materials, and bastardized to excess.  Some variations have proven successful and others that can't prove their worth simply fade away from the fly display cases.  Regardless of all the changes, the spirit of the original Adams survives and remains a constant showman in all fly shops.

Now with all that common knowledge out of the way I'll give you a little information you might not have known.  In the 1800's there was a species of grayling specific to the great lakes and Michigan that dominated the area for centuries but due to environmental deterioration and massive over fishing the grayling disappeared.  In the 1880's the grayling was so easily caught and plentiful, the drive of logging companies from the east used them exclusively to feed their men.  Apparently it was nothing for a man to go to the river for an hour and leave with two dozen grayling in his creel.   Less than fifty years later however they were gone forever.
Another species that was all but wiped out was the native Brook trout.  The rainbows that were introduced to supplement the stream habitats eventually began to thin out and around the turn of the century a serious effort was put forth to restore fish to the streams of the area.  Unable to bring back the grayling or the native brook trout,  the administrators took a common approach of the time.  They looked back to the birth of modern fly fishing - England - and their hardy Brown Trout.
Stocking the spotted bulldogs in the Michigan streams worked almost to well.  Some might argue that the introduction of the Brown gave a species already on the ropes, a final knockout blow.  I have a hard time arguing with that line of thought but at the time few understood the ramification and all we can do today is learn from past mistakes and move on.  These European trout were well suited to the regions abundant food sources and quickly took over the streams and rivers they lived in.  They adjusted so well that the growing cadre of fly anglers soon found that these new fish were not as easy to catch as the previous species the were use to.  They were extremely finicky and seemingly smarter than the dwindling rainbows.  Out of that frustration was born the Adams Fly.
The Adams fly of the 20's is not the fly we see today however.  Materials have changed, hooks have been more refined, and the tying has been refined.  The original was tied with feathers from a golden pheasant neck for a tail and a body of grey wool yarn (probably poached from a women's sewing kit).  I  believe that the yarn used in the 20's is still available today even though it has been out of production for nearly 70 years but count on paying for it.  Last time I saw it for sale it was listed for about as much as a new Abel fly reel goes for.
Today the pattern follows a simplified recipe:
Today I salute the Adams.  It is a fly that is as American as Apple pie and baseball.
Posted by Unknown at 9:11 AM

the evolution of the small stream fish and a fly born out of necessity... quite a sad story for the brookies and grayling

An outstanding fly. It's likely known world wide. I fish the original version as well as the parachute.
Your drawing does it justice.

Finally, a history lesson I can get into.

You may find this interesting. Never mean to educate someone but it's the history of Adams written by my Guide Mentor here in Livingston.
Go to Fly Anglers OnLine (www.flyanglersonline.com), articles (left), Eye of the Guide, scroll down to "Evening Along The Stream (part 7)".
Don't forget to check FOTW (fly of the week) also for my old articles and I will submit more soon!

Thanks for the comments guys - while reading up on the Adams I was wasn't looking for new information. I was just looking to refresh my memory for this post but along the way I learned something. I never knew the history of the Michigan Grayling or how it eventually disappeared. Heck I didn't even know it ever existed. As Kevin said - that's a lesson I can get into.

Blake - The best flies are born that way. Simply put a fly that produces stays around and yes I'm with you. Sad the Grayling is gone, sounds like a fish that would have been a blast to hook.

BRK TRT - Yet another American product the world is hungry for. Thanks for the kind words.

Satoshi - I'll check that out. As I said, this is one of the most discussed flies of all time and there is always something new to learn for those willing to do the leg work. Thanks for the tip!

Great piece! It's amazing how flies evolve over the years or don't. The Adams is the perfect example of one that never needed to be "bastardized", it was perfect from the start.

Sanders - thanks, it was perfect from the start but as every tyer out there can attest to, we just like to tweak things even if they don't need tweaking.

Peter - thank for the kind words and the visit.

What a great post Joel! I loved the history lesson. While I'm at it, I love the new look as well.

Cofisher - glad I could share it with you and thanks.