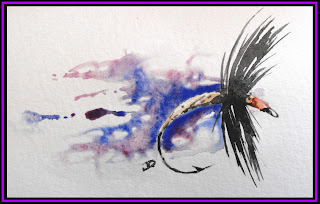 Yesterday I took my new Tenkara setup for a test run and was immediately impressed with the way it performed.  On my third cast a nice 10 incher took the fly and the fun never stopped.  One after another, rainbow after rainbow and even a moderate sized brown attacked my presentation with amazing vigor.  It had to be the best two hours of fishing I have had in a long time.  They weren't the native brookies I had planned on testing the rod out on but with the time constraints I had to settle for a lower elevation stretch of river.  I was sure happy I settled. 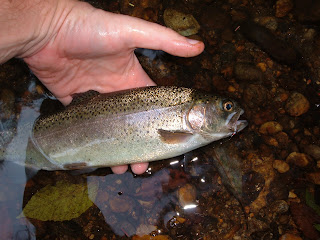 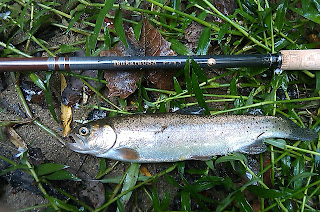 I did have one big shoulder 13 inch Bow that tested my fly and my 7x but I managed to chase him down and pull him in.  I found that fighting these bigger fish on a setup like this, without a bit more line to peal off fighting the fish, it is more of a challenge.  I did a lot of moving up and down the bank trying to baby the line and hold the fish.  The reward was worth the effort. I also was a bit unsure what to do with my free hand now that I had no line to hold. I eventual got use too the feel and became comfortable with the cast and various ways to fish a tenkara fly.
I fished the normal dead drift, the cross current pull, the upstream pause and pull, the down stream pull and pause and found for these fish the dead drift worked the best and the up stream pull a distant second. 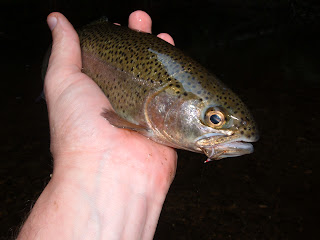 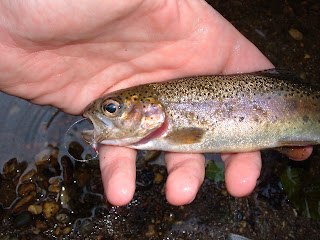 The little guys were fun and the day was a total win.  I am glad I made it out.  Now I have something more to dream about when I am back at work.  This trip is just what I needed to fill the old inspiration tank.
Id like to write a bit more but work is creeping up on me and as the saying goes, 'first things first.'  I will leave you with this.  If you havent tried Tenkara on a small stream, you are sure missing out.  I LOVE MY TENKARA!!!!"  Thanks again Daniel from Tenkara USA for this killer set-up. 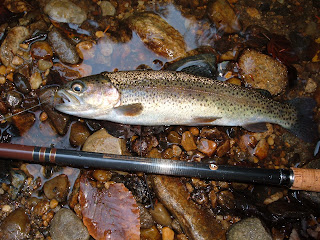 (Keen observers might notice the poor fin condition on alot of these fish.  Not all the fish I caught were this beat up but even the rough looking ones were still fun to catch.  hopefully next time I will be able to hook into those native brookies after a bit of hiking and hunting blue lines.)
Posted by Unknown at 3:09 AM

I'll bet the trout were released but you're hooked for good! Two hints: 5x works just find and you won't have to baby it, and your other hand is now free to hold a wading staff.

Welcome to the club!

That's what I'm talking about!

Thanks guys. Chris, I linked your site to mine. What a great source of info. It was a blast. Can't wait to do it again.

Tenkara is an extremely enjoyable way to fish. I hope you like it as much as I do.