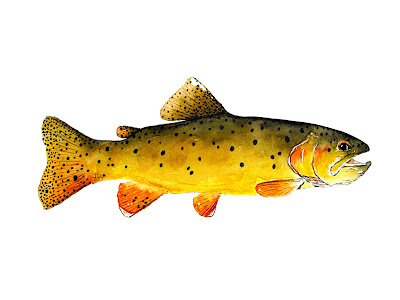 Number four on the recent list of rare trout I have chosen to paint, is the only other native species of trout in the state of Arizona (the other being the previously mentioned Gila Trout).  This beautifully stunning species of trout once inhabited nearly 600 miles of White Mountain streams but today teeters on the edge of the threatened species list. 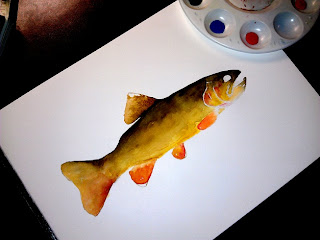 As with the Apache's closest cousin, the Gila Trout, the Apache's primary threats include the loss of habitat as well as the interbreeding with the genetically similar Rainbow Trout.  Introduction of the rainbow has nearly wiped out the Apache in most of its native range in the secluded streams and creeks of the white mountains.  Luckily through constant conservation efforts, the Apache numbers are on the rise.
"The Apache Trout"
Watercolor On Paper
Prints available soon.
---------------------------------------------------
On with other news - You might notice that I have added a Tenkara Techniques page to my site.  A while ago I did a few posts about the four techniques I use quite a bit while Tenkara fishing and with the response I received from these emails I have decided to post a page with the posts and illustrations included.  I hope they come in handy for any novice Tenkara fishers out there. 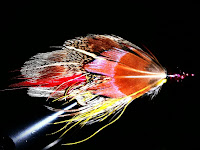 ?Question of the day?
Have you ever just started throwing feathers, hair, and thread on a hook without a clue how it was going to end up?  Well this is what happens when I do.  I am hoping to get some time soon to try it out and see how badly it fishes.
Posted by Unknown at 9:07 AM

You have amazing talent! I can not ogle at your drawings! They are simply beautiful.

Joel,
Beautiful painting of an Apache Trout.
Those western and desert trout are special.
Did you tie the fly? Creative.

very cool, Joel. The Golden Trout I got from you earlier this year is now officially part of my man cave, being beautifully framed and beyond museum glass, hanging just above my tenkara rod wall rack.

If your fly doesn't fish well - I'm sure you can use it as a hair extension. They seem go well at our local department store.

Tomek O - thanks For the overseas visit.
BrTrt- thanks and yes it is my tie job but nothing like the flies you tie up.
Goneflyfishing - I am so glad that it went to a worthy home. You'll have to send me a pic on how you got it framed. I always like to see my trout in their natural habitat------ A Man cave wall.
Anonymous - hopfully that trend will die out soon.