Forget The Paiute Trout - Save The Caddis Fly 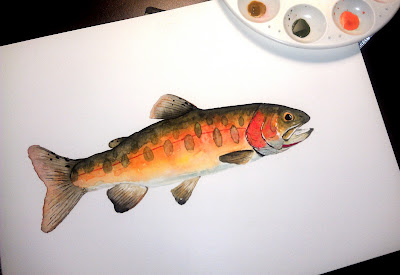 "Save The Caddis Fly - Stop The Re-Introduction Of The Endangered Native Paiute Trout".
No that is not a joke.  That is exactly what a group of completely delusional, so called 'enviromentalists' are advocating in California and they have the lawyers to fight it.  Right now it seems that they are winning the battle.
I picked up a copy of The Wall Street Journal yesterday (that's right, the Wall Street Journal - I still believe in capitalism.) and on the front page is a story about the threatened Paiute Cutthroat Trout and these 'nuts that are fighting their reintroduction in favor of a very common bug. 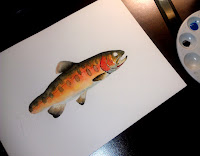 An environmental oddity, the Paiute is a species of cutthroat that has naturally evolved into a separate type of trout.  Separated from other cutthroats by two waterfalls on a nine mile stretch of Silver King Creek, the Paiute has lived and developed for hundreds of years.  Around 1912 a local shepherd and avid angler (Joe Jaunsaras took a bucket of Paiute from this isolated stretch and transplanted them up river.  He might not have known it but this transplantation saved the Paiute.  Over the years, the introduction of other trout into the original nine mile stretch of Paiute river led to their destruction.  Fortunately Joe's transplantation saved this special trout from complete extinction. 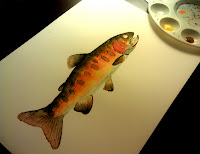 Now there is a move to restore the Paiute Trout to its native nine mile home on the Silver King Creek but the 'Bug People' are fighting it .  Scientists estimate that there are only about 2000 Paiute left in the world and by every anglers knowledge there is about 200,000,000,000+ Caddis flies in North America alone.  There is NO threatened species of insects known to exist in the nine mile stretch of King Creek yet these bug nuts are fighting to save them.  Their main complaint is that anglers are behind the reintroduction of the Paiute.  Obviously they don't understand that most anglers love a healthy caddis filled stream as much as anybody and we often strive to make as clean an environment as possible for both trout and bug.  After all, without the little flies our trout streams would look pretty barren.
For me these idiots are proof that common sense is the real endangered species in this ever shrinking world of ours.  Seriously!!!  If you want more information on the Paiute Trout effort check out the Monday Nov 17 WSJ article or the local California TU chapter.  I also encourage my fellow bloggers to do a post to spread the word and stop these bug nuts from doing more harm than good.
I painted this Paiute Trout yesterday with this article in mind.  Never did I think an article in the WSJ would lead to a trout painting but there you go.

On other more light news, My little girl and I spent a little time the other day moving pawns and horses around the board.  I have been teaching her the moves of each piece over the last few months and now that she knows what each piece does she wants to play me ever chance we get.  I have no doubt that she will soon be thinking three moves ahead of her old man...........
Thinking about it now, I might come to regret this decision when she hits her teens.
Posted by Unknown at 6:30 AM

your painting is beautiful.

and playing chess w/ your little girl is so sweet!

Seems like someone in that organization is lacking in math skills. Caddis flies over only 2000 trout.

Nice painting.
And as far as teaching your daughter chess..........Bravo

TexWisGrl - Thanks for the visit and the kind words. Can't wait to see your nov work.
Brk Trt - They are obviously not math scholars or professors of logic. All they seem to know is Bugs and It amazes me that they can gather enough support to hold the project up.

Just proof that ignorance is not bliss. It pays to know all the facts. Great job on getting your daugther to learn to think ahead.

save the bugs? what a joke. thanks for the fascinating history. hope it all works out for the trout, they look stellar