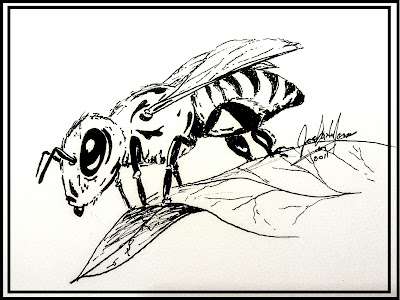 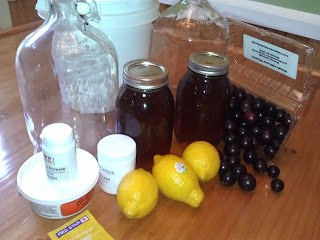 I finally got to bottle up some of my mead the other day.  I started the process about three months ago with the key stuff you see off to the left.  The honey came straight from a local bee keeper and boy was it sweet.  I was told that it was a hive placed in a sandalwood grove which might be why the color was so much darker than a clover honey or fruit orchard.  Apparently it really makes a difference where the bees live and harvest on how the honey tastes.  When one thinks about this it makes perfect sense but who thinks about it?  I never did.... until now. 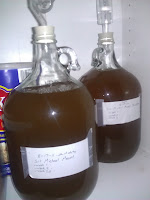 When I first boiled up the honey, added the extras and the yeast, then bottled it up in the gallon carboys the concoction looked like a thick cider.  The fermentation started nearly right away and bubbled with a very lively action.  When I made my wine I first placed the mix into a covered bucket for 4-5 days then transferred it to the carboys, but for this mead I placed it all in the carboy right away.  The lack of hard contents in the mix made this possible because when the fermentation ended and the mead began to clear, there was very little sedimentation in the bottom of the jug.
After a bit over two weeks I slowed the fermentation by lowing the temperature and putting the remaining yeast into a sort of hibernation.  When the sediments settled out I racked off the good mead and added a bit more honey and a yeast killer to make sure the fermentation process did not start again. 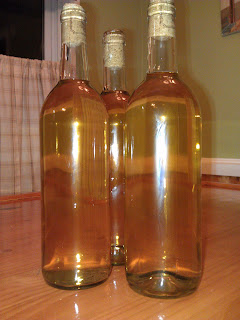 Finally I took one of the gallon jugs and bottled up the best of the mead.  One might ask, "Isn't that a lot of work for three bottles of mead?  Can't you just buy your mead at the liquor store?  Why go through the hassle?"  Well, if you have to ask that then you are missing the point.  Life is about the process and making mead, wine, tying flies, hunting, fishing, backpacking and even work is about the process and doing it well.  Part of that process is learning from your mistakes and trying till you get it right.  the making of this mead is a product of that.  My first foray into wine making was somewhat disappointing.  The wine was lacking in taste (not alcohol) and for the most case just sitting in bottles waiting to see if time improves it.  I suspect no amount of time will help, but this mead was a drastic improvement.  I tasted the mead before bottling and it tasted good.  I might have used a bit to much nutmeg but that can easily be fixed on the next go around.  Anyway, I have another gallon to bottle up next week and come Thanksgiving supper my table will be jolly with home made mead.  Thanks to you American Honey Bee! We salute you.

It's really that easy eh? Do you have homebrewing experience? Can you post a recipe?

Alex, sure. For 1 gallon of mead its : 1gal of filtered water, 1 juice from lemon, 3 lbs of pure honey (best from local bee keepers or health food store), champagne yeast or equivalents, and last I used 1/2tsp of nutmeg but would recommend a bit less since it is a bit strong in the initial taste test. Good luck, I had a bottle of it for dinner and my company had more than one glass. That's always a good sign.