The People Of The Fly Fishing Show 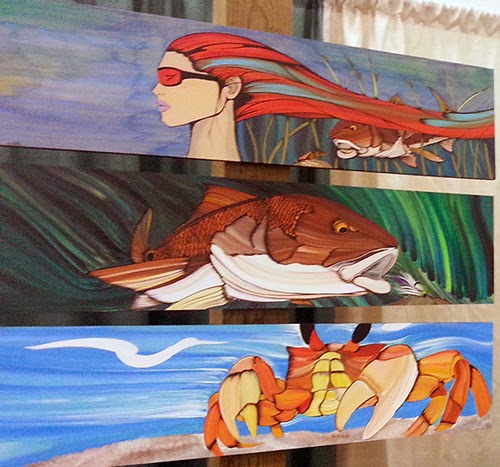 How do you know that you are obsessed with fly fishing?  The realization for me came last year when I got a final wisdom tooth pulled.  The previous three were pulled many years ago the old fashion way with the doc simple telling me to hold tight and pulling hard.  It was unpleasant but cheap.  Unfortunately when I went the last time the doctor told me that anesthesia was necessary and to make a long story a bit shorter, I was later told - because I have no recollection of the event - that I awoke telling the nurses a very animated story of this massive fish I had caught on a fly rod.  It was at this point that I can fully admit that I might be a bit obsessed.
So, fully embracing the obsession, I made the long trip up to Winston Salem NC for the day to spend my time drooling over new fishing gear and meeting a collection of like minded people equally obsessed with the fly. 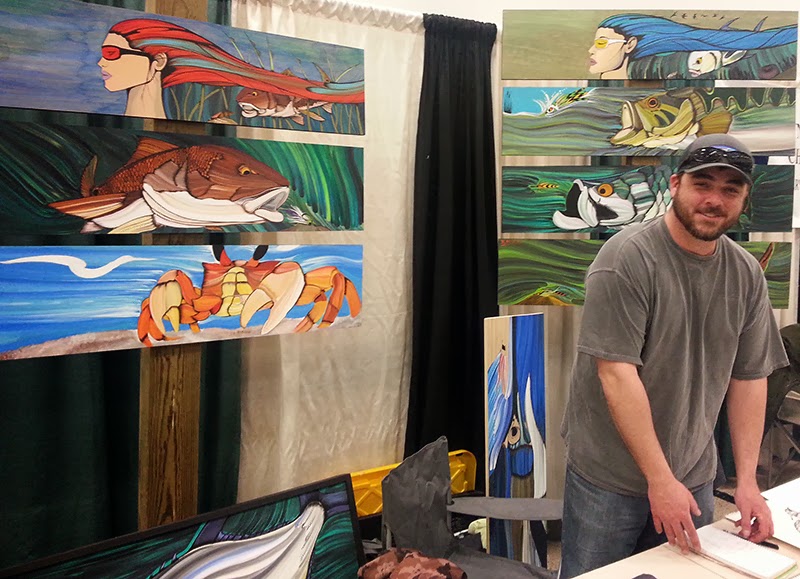 Southern Water Design
One of the first guys I gravitated to was Brad McMinn - fellow angler and artist.  Specializing in large scale works of art he paints on wood, Brad and I share a similar upbringing in art.  Aside from a few small art classes years ago, we both are self taught artists who stumbled upon the fact that people like what we do.  His works are simply amazing and I am proud to share them with you.  Innovative and unique, the clean lines and bold colors are signs that he is well on his way to a success.  Please visit his site at SouthernWaterDesigns.com

MikesGoneFishing.com
Another guy I ran into while walking around the show was a blogger I have admired for years.  If you have yet to find Mike Sepelak's blog then take the time to flip on over and indulge your senses in some great photos and fantastic writing.  It was great to finally meet the man behind the words.  As suspected, Mike is as genuine a guy as I imagined him to be.

lmflyfishing.blogspot.com
Continuing the string of great people to run into at a fly fishing show, I quickly met up with Lance at the, of all places, TenkaraUSA information booth.  I have exchanged numerous emails with lance over the years regarding art and fishing expeditions but have never had the privileged of meeting the man face to face.  After a great conversation I wouldn't be surprised if we someday find ourselves fishing the same stretch of river.

thefiberglassmanifesto.com
Cameron Mortenson is quite possibly the most knowledgeable person on glass rods that this angler has ever met.  He of course will humbly deny it but as the owner of the Fiberglass Manifesto and key author in the rise of glass in popularity over the past few years, you cant deny his contribution to the sport.  I once again had the opportunity to talk with him and have a laugh at the amount of people that actually recognize our work from the web.  I also managed to squeeze in his lecture on glass at the end of the day and was so glad that I did.  If ever you have a question on glass then Cameron is the guy to go to.  If he can't answer it then he will personally put you in touch with the guy that can. 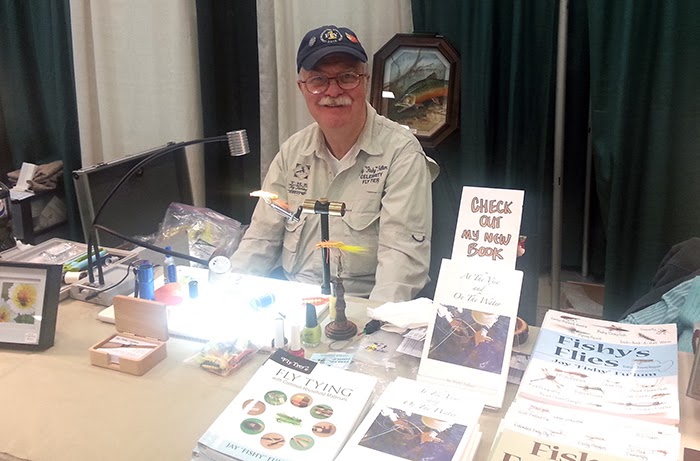 Jay "Fishy" Fullum
A few years ago I first ran into Jay and immediately I knew that this was an angler after my own heart.  An artist, illustrator, author, and remarkably creative fly tier Jay can make a fly that hooks fish out of just about anything - including an old seat-belt.  This year I not only got some key pointers from him on how to promote and sell my art but also how to tie a killer trico fly with the use of a seat-belt.  If you don't have one of his book - GET IT.  You will not regret it.  It will not only allow you to save money but it will make your fly tying more diverse. www.fishyfullum.com 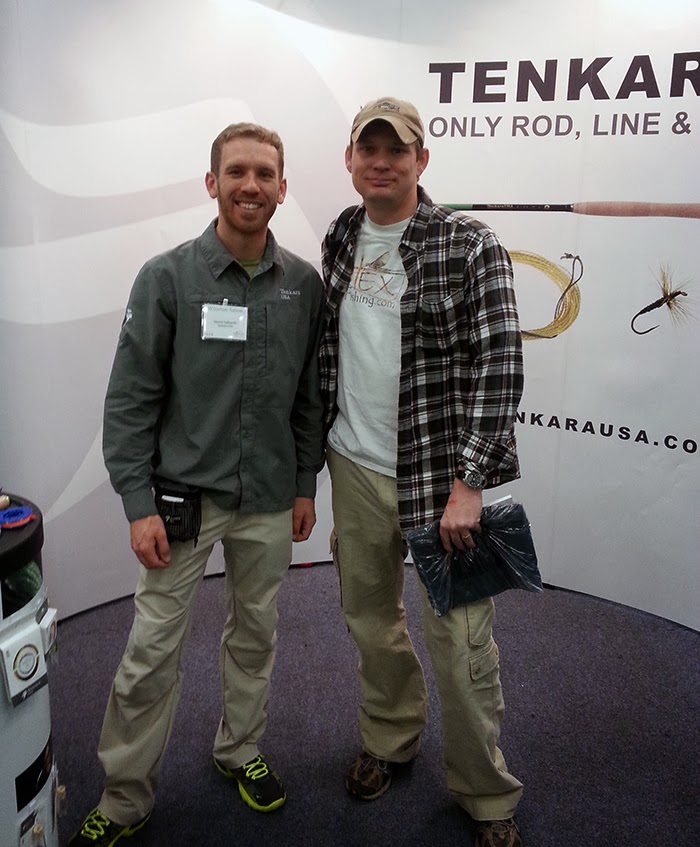 TenkaraUSA.com
As many of you know, I love to fish Tenkara.  I might not be as dedicated to it as many out there but I am constantly drawn to it and its simplicity.  Years ago when I first started off with this blog thing, Daniel Galhardo was one of the first people to purchase some of my art - including a few watercolors of Tenkara flies I did for my 'one fly an day' for a year series.  Since then I have had continued contact with him about art and Tenkara techniques.  This year I finally had the opportunity to meet him face to face.  As anyone that has met him can attest, he is a not only a pleasure to talk to but is about as knowledgeable a guy on Tenkara as you will find in the US.   I dropped in on his lecture on Tenkara which made me want to attend the Tenkara Summit in Colorado all the more.  If you want to know how Tenkara made it to the US then look no further than Daniel and Tenkara USA.  He is the reason the fly fishing industry has been in a tissy over this ancient for of fishing and he is one heck of an ambassador for fly fishing.  There may now be others selling Tenkara rods out there but make no mistake -TenkaraUSA was the first and continues to be the benchmark.

I met a whole lot more great guys and presenters at the show - way to many to mention here- and anyone that made it out will agree that it was well worth the effort to get there.  It was also great to finally put faces to they emails and comments.  Someday I hope to make it out to the NJ or CO show to meet the rest of you but until then, hopefully I'll see you on the river.
Posted by Unknown at 7:04 AM

Joel
I would truly love it if this event was closer to me, I would go every year. Fly fishing is my passion--really enjoyed the read!

I could go to the Conclave in Mountain home each year but I don't. I could also attend the Smallmouth Rendezvous in Tahlequah but I don't. I did attend the Fly Fishing Film Tour last year (not going this year) and was amazed at how packed the theater was that night - we had 2 showings. I was amazed at how many people showed up. We had people in from Tulsa and around AR and MO. I did see folks I met on Instagram too. Now, I just may be attending the Smallouth Rendezvous.

I love the fly fishing show for exactly the reasons you mentioned. I love meeting people that I've communicated with but never in person. We'll get together one of these days Joel.