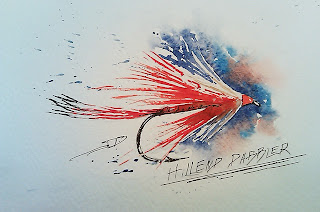 Here is a fly I got from the Hillend Dabbler blog from across the pond. It is interesting to see the flies they are coming up with over there. I am sure that some of them kill trout out in the Americas as well. 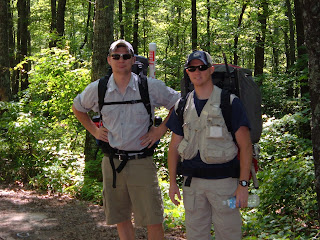 Also I just got back from a great 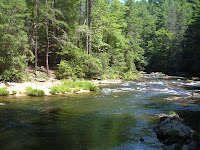 backpacking and fishing trip to the Chattooga.
My friend Kevin (He's the guy on my left, your right) and I started out Tuesday by packing in our gear to a remote area called Big Bend. Our stream side camp was Ideal. Water on three sides and a great fire pit complete with stone chairs and a large flat rock for cooking. With the sound of running water through the night, I had very little trouble going to sleep (the Crown & Coke might have helped that as well.) 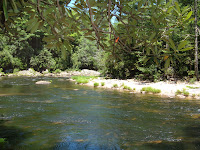 We caught quite a few nice, if not large trout and had a great time. Spent a lot of time scrambling over rocks and waterfalls (big bends 30 footer) and trying to find were the trout were hiding in the 92 deg heat. We found them in deep oxygen rich moderate flows where only my olive woolly bugger would entice them to bite. 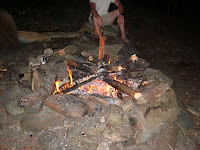 The most interesting event on the trip was this copperhead making a meal out of Kevin's rainbow. For the record, this was the second time in my life I've seen a snake eating a trout. The first time I was chest

deep in water and the snake was a 3-4 foot brown snake 2 feet from my head. This guy was secure in a rock and although a deadly snake,was not close enough to bite. 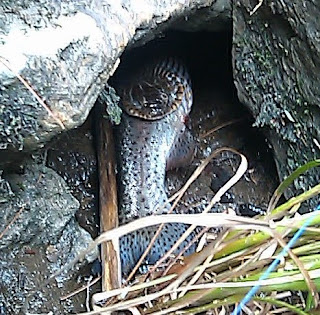 Another deadly snake was less than 100 feet up stream. It was a 2foot eastern diamond back rattler. This guy was coiled up and angry looking so we gave him as much room as we could. Normally the site of a diamond back would be exciting enough but after seeing the copperhead down a trout, it came in second as the most interesting site of the day.
Posted by Unknown at 6:28 AM

Cool fly, looks a tad princeonamid-ish
wowzers! on the snake, That stream needs a fly pattern called "snake bite" Heck I need an olive bugger caleed that... (next joint post maybe)
great to see a trout brought to hand..
some time try, an s&m or something in front of the wolly bugger about 12-16 inches, and maybe, just maybe, something will try to take the wolly bugger's food from him.