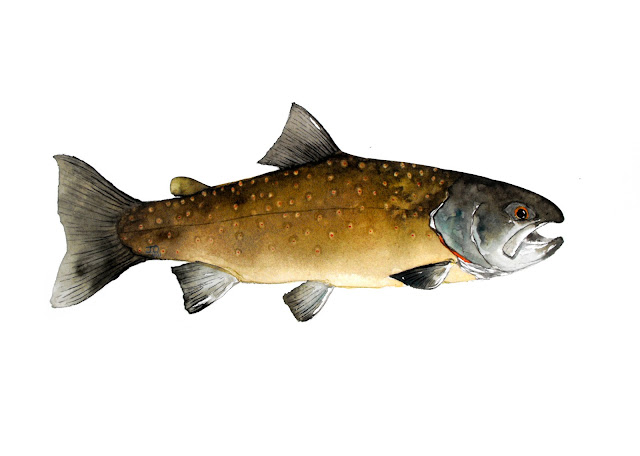 Scratch another trout of the list of fish I have left to paint.  The Bull trout - not actually a trout but really a char - has a native range that covers most of the western North American mountain ranges.  Yet, even with this wide area to inhabit, the Bull trout remains on the threatened species list.  The primary reason for this might be its need for specific water temperatures (less than 55 deg) and habitat that has in recent years been disappearing. 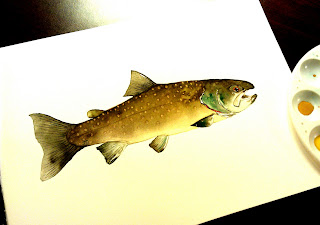 Like its distant cousin the Brook Trout, the Bull sports the signature white leading edges of its fins but lack the brilliant colors usually associated with the Brookie.
Over the years, the Bull trout has been a species living in limbo.  Once classified as a Dolly Varden - the Bull was re-designated in the 1980's as a separate species.  Unfortunately, the sharing of environmental ranges with the Dolly, their similar colors, and general lack of knowledge about this species has led to decades of confusion.  Adding to this confusion is another completely separate species of European Sea Trout also called a Bull trout. 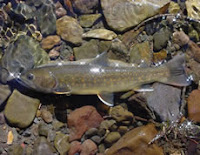 A Quick Google search will yield a whole bunch of photos of simply massive trout.  I believe that this species can reach sizes reaching 40+ inches.  Protecting and restoring this special char to its former glory should be something we all can work toward.
"The Bull Trout"
Watercolor On Paper
Prints available soon.
Posted by Unknown at 9:19 AM

I love this! And I love the new layout. Nicely done Joel.

Excellent work. Once again you amaze me with your talents. Your posts always impress me.

Tomek - thanks for the comments and the visiting
Teswisgrl - not my usual color choice but seems to work
Cofshr - trying to keep the layout fresh, glad you like it.
Cocasters - I'm glad I am able to share them with you.
I wouldn't have the drive to do what I do without all your continued support. Thanks.

Another awesome painting. Even though I might not comment every time. I view all of your posts. Great work!

Another home run. Keep it up.

Another stunning image. I really look forward to every new offering.