Another Box and a Rocket Launch 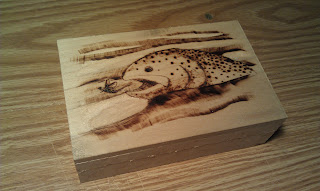 Here is another wood burned box I have in the works that is again not yet finished.  I worked on these two boxes at about the same time and will probably finish them together.  This one has a poplar top that is carved and woodburned and birds eye maple sides.  I plan on also adding a boarder of inlay around the sides when time permits.
The kids and I also decided to launch a few rockets the other day.  I did this as a kid and loved it.  Come on, what kid doesn't like the thrill of lighting something on fire and watching it blast off into the air.  I thought I'd share this thrilling adventure I had as a kid with my own and as you can see, I took a few pics and videos to share with you as well.  If this is something you have never done then you are missing out. 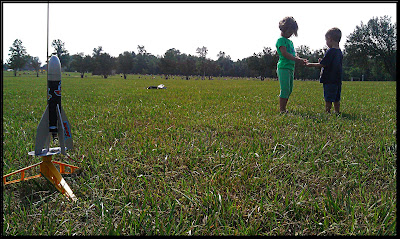 Our rocket was a simple mini Bertha with about a dozen Disney stickers the kids decided to decorate it with. They had about much fun chasing it across the field as they had launching it.  Even dad got a smile on his face when the mini projectile left the pad and shot toward the sky.
Not exactly a Cape Canaveral launch but you get the idea.  Absolutely Fun!
This one was a small engine launch, the next was a much larger engine and took the small rocket nearly three hundred feet before the parachute pop.  Notice my boy with his ears covered... I guess he has seen daddy launch to many fireworks over the years.
not a very fishy post but nearly as fun.
Posted by Unknown at 6:47 AM

That box says so much.
Fine work.

Loved starting my morning with the sounds of excited children. Thanks for sharing a family day your kids will never forget!

I did that as a kid too. Man what a blast. Only problem we had was finding the rocket after it came down. Didn't have a nice field like that.

glad you all liked the box. Also about the rockets - I am sure we will be doing it again. The kids LOVED it. Next time we go with the biggest engine that will fit into it. I can hear it now 'dad, where did it go?'

Those videos are great. I don't know if it's just me but once I became a dad I enjoy watching other people have fun with their kids.