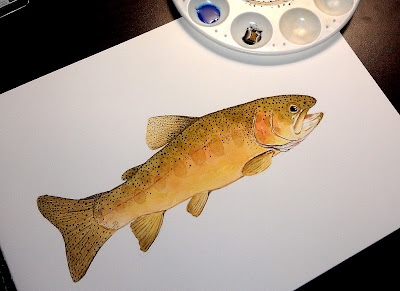 The Gila Trout is a conservation success story.  While doing some reading up on all the different types of trout that inhabit the waters of North America, I came across the Gila.  A relative of the Apache Trout, the Gila had lived most of the last century on the edge of extinction.  In 2006 that changed when it was downgraded to a threatened species.  The more I read into this species, the more I appreciated just what it took to restore this trout to a healthy population. 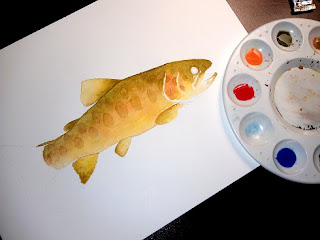 Through the efforts of anglers, scientists, and the government it is now legal to pursue this special trout with a fly rod and as long as anglers obey the rules established to protect it, this trout will be around for our children's children to enjoy.
This is the first time I have ever looked into the history of the Gila and after a brief Google search I was able to see just how much color this trout sports.  It truly is a beautiful fish and a worthy species to protect.
This New Mexico and Arizona native once had a range through most of the Gila river and its tributaries but in the late 60's their range had shrunk to a mere 20 miles.  Today they now enjoy a healthier habitat in over a dozen protected streams near and including the native Gila River.

The average length of this trout is around a foot but can reach sizes similar to its trout relatives of close to twenty two inches.  Whatever the length, it would be a joy to hook into one of these special trout. Solid conservation projects like protecting this trout are efforts every angler can support.
"Gila Trout"
Watercolor On Paper
Posted by Unknown at 9:29 PM

Love this, and the Paiute. You catch trout in a way I wish I could. Thanks.

Well done.
Doing tribute to these trout, in your special way.

Seeing those fish come alive on your canvas really makes me wish I had a talent like that...pretty amazing to see what you can do with a blank slate.

Jim, Brk, and HPD - thanks for the kind words and the comments. I'm glad that there is this forum to share works like this.