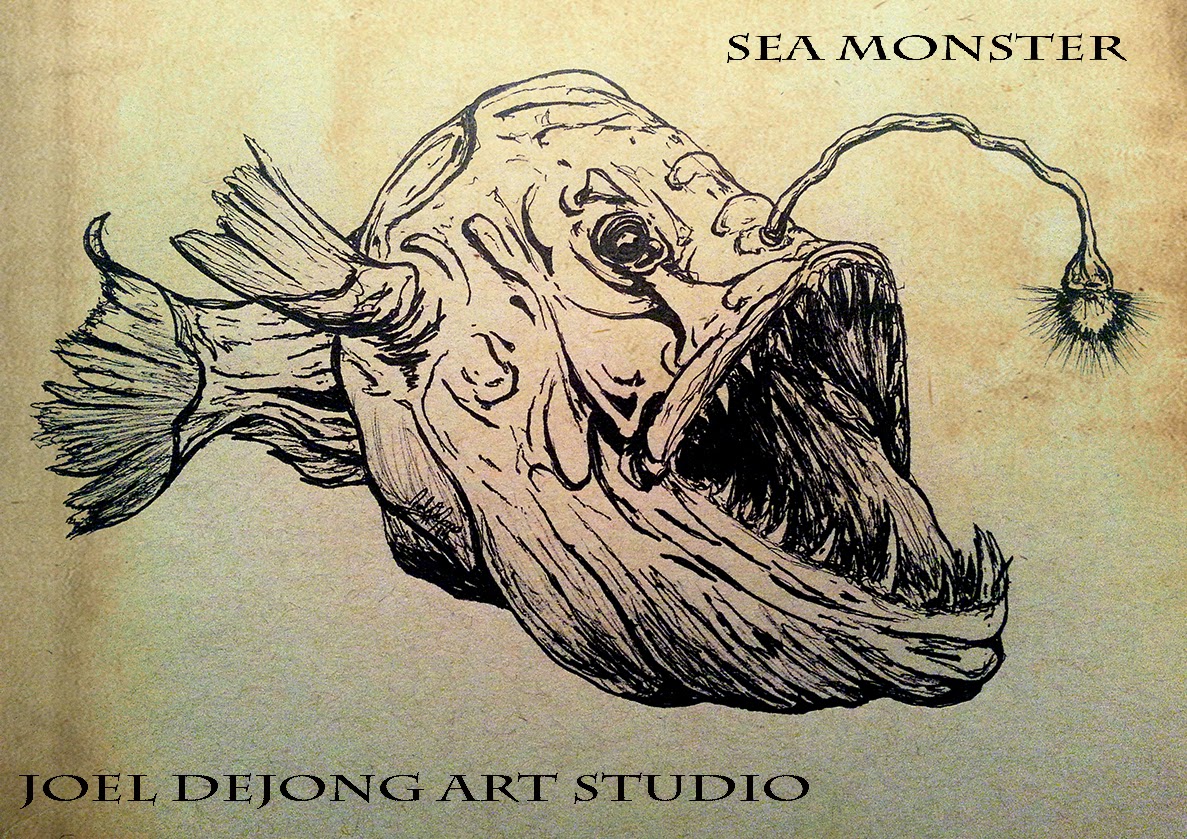 Does this have anything to do with fly fishing?  In truth, no but then again isn't the Angler Fish thee embodiment of what we as fishermen strive to emulate every time we head out with rod in hand (minus the grotesque monster like qualities and nasty sharp teeth of course).  This Jewels Vernean type sea monster is often looked upon by the general public as a beastly creature from the deep but to us fellow anglers it should be viewed as quite possibly the best equipped fisherman on (or more accurately in) the water.  Besides, It just looks COOL. 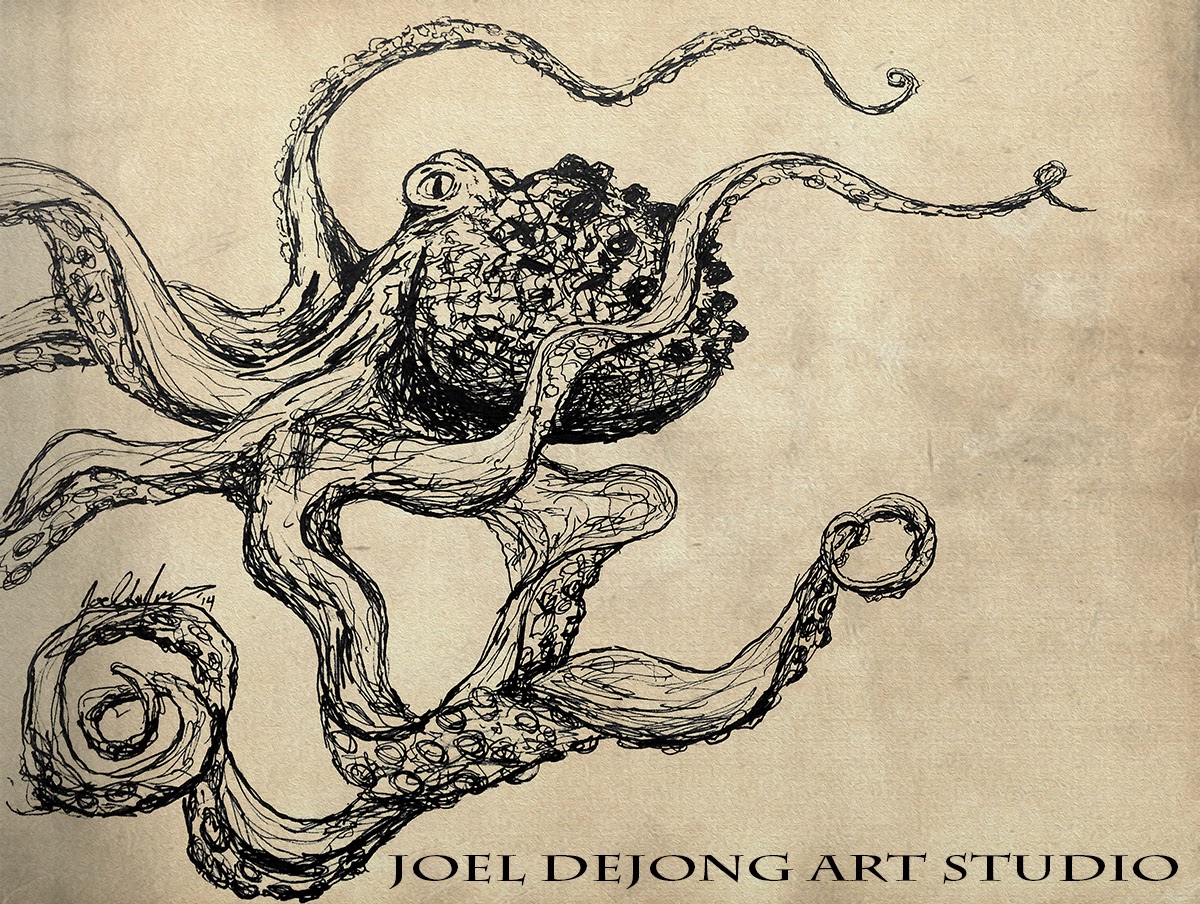 With the theme of sea monsters fresh in my mind, I also decided to sketch out another great beast of the Vernean bent.  Being a big fan of good sea stories and the rum that undoubtedly helped in the telling of them, I did this pen and ink sketch mostly just to share with the kids.  They just love weird sea creatures and cant get enough of them when ever we hit up and aquarium.  Truth is I cant get enough of them either. 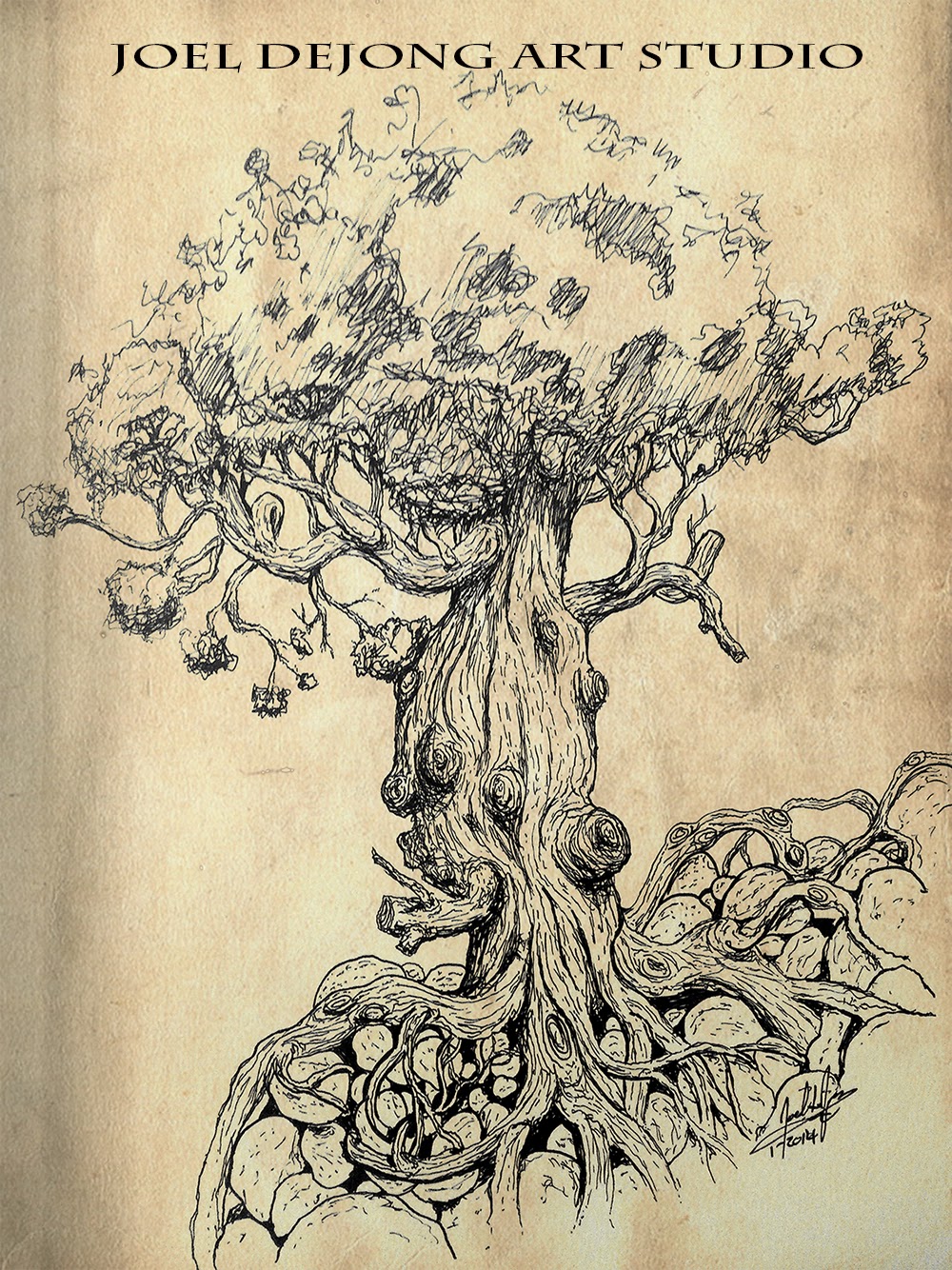 I was really on a roll the other day with being confined to the house so what better way to work away the hours then with a sketch pad and pen.  My daughter loves the Tinkerbell fairies and although I'm not as big a fan of the Disney cartoons as she is, I can still appreciate the art that goes along with it.  I do however love the old school art that accompanied books like The Brothers Grimm Fairytales and those classic N.C. Wyeth illustrations that graced many a R.L. Stevenson novel.  The line illustrations just jumped off the pages and would make any young boy want to be part of that world.  My pen drawing of this old knotty oak embracing a clutch of rocks stemmed from memories of those classic prints.

WARNING - The Following is NOT POLITICALLY CORRECT
Not to stretch a metaphor to thin but there is something to be said about a strength and persistence in the face of adversity with this illustration.  Friedrich Nietzsche once said 'For a tree to become tall it must grow tough roots among the rocks'.
I will struggle not to get to political here but will probably fail miserably.  While I am not in line with much (if any) of Nietzsche's ideas, I think this statement holds some water.  At this point it is also fair to say that he died after suffering various mental breakdowns - probably due to his struggle to reconcile his ideas with truth.  Regardless, the idea that in order to build a strong tree, person, community, or country - that entity needs to face adversity.  I wonder if today in this country we have lost that edge.  Have we lost that appreciation for hard won battles?  Have we lost that desire to stand on ones own two feet and say 'I did that'?  Everyone needs the aid of a helping hand once in while but should we always expect it to be there?  Shouldn't we have more self reliance or self respect than to trust someone else to always be there to catch use if we fall.  An occasional skinned knee or broken bone in life is not the end, just as it is not the end of learning to ride a bike.  Are we now a nation of vagrants that blame others for our problems and are so unwilling to face adversity that we always look to the government to solve our problems?
Grow roots among the rocks people.  Or just get a pair of 'rocks' and overcome adversity.
Just my $.02.
Maybe I just need to stop reading the paper.
Posted by Unknown at 9:10 AM

Your drawings and paintings always amaze me. I can only dream of being so talented.

Hey Joel, I love the octopus.

Love the pictures.
Comment while probably not politically correct is something I have been wondering for some. Our mentality is like the no-fault insurance idea of the 70' and 80's. No matter what the issue there is always someone to blame. I wish I could use that for my weight issue.

Like the pen and ink, especially the octopus. Also, great font for our studio, so professional:)

Mark - thanks once again for the kind words.
Lance - freeky looking creatures aren't they.
Bill - Anytime
Dad - yeah, I gotta just stop watching the news. Gets me fired up with all the stupidity out there.
Anonymous - thanks.