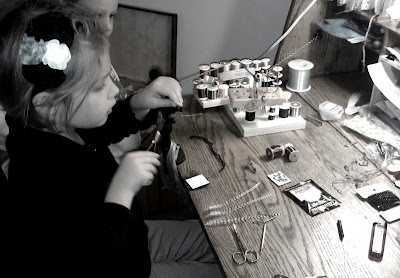 This afternoon found me wrapping up some work and settling down to a cozy fire and a little instruction in the art of tying flies - or as the kiddos call it Fly Tying.  After finishing up a bunch of nymphs (More on that later) My daughter wanted to tie her own bugger and after a short demonstration she settled in and took feather and thread in hand. 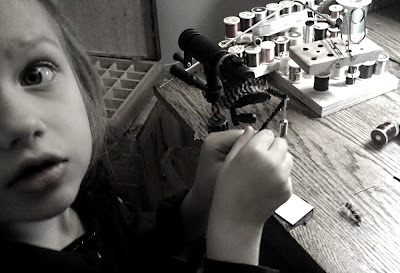 Along with some instruction on the way, she began to create her own Woolly Bugger. 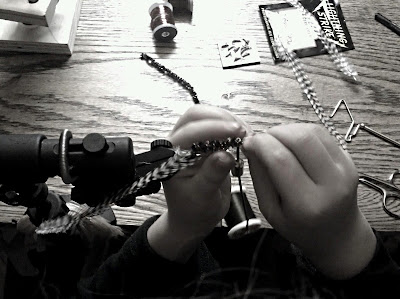 After a little trouble trying to get those little fingers to do what she wanted them to, do she began to get the hang of it and before I knew it she had a good first attempt on the vice. 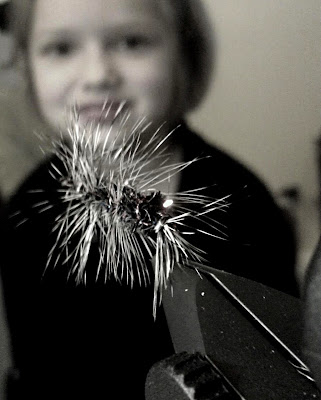 I promised her that when we next visited the stream (or bass pond ;-) we would give her hairy bugger a chance to hook into some fishy gills.  Her hopes were high and inevitably she brought up the last time she had a hand in making a fly.  We called it the Grinch due to the season and the color she had chosen for the non-traditional Tenkara fly.  It had done well - 5 fish in about as many casts - and she never has forgotten it.  Hopefully this time with a fly tied by her hand, she will not be disappointed.  As it is I am tempted to set it aside as a memento but I will probably wait till she gets a chance to fish it. 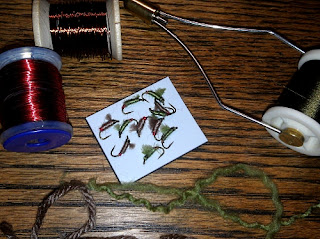 As for my attempts at tying, I took inspiration from Frank Sawyer and his Killer bug to create this little bug.  It doesn't have any name and is NOT made from the legendary Chadwicks 477 wool yarn ($200 a pop !!!  My word, that stuff better hook fish!) but I think it might do just fine.  I added a little tuff near the head for effect.  I thank my wife and her yarn box for the use of a few strands of her Acrylic/Polly blend. 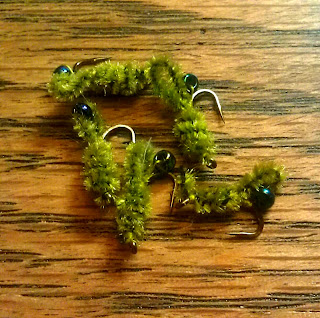 And finally here is my take on the southern inch worm pattern The Green Weenie.  Basically I added a green pearl bead.  Nothing to imaginative but I made it my own and the next chance I get I will try it out.
Posted by Unknown at 6:33 PM

Nice going Joel. I think that your daughter is showing some real talent. I wonder where she get's that from. Frame the fly after her first fish.

That girl has some crafty blood in her, that she got from her fabulous Grand Aunt from Iowa!!!!! Love it!

Great job young lady. I have taught tying classes to high school seniors that couldn't palmer a hackle to save their lives. I bet is hooks a bunch!

Great job, Joel! Taking the time with your daughter is awesome. She looks like she will be able to handle fly tying. Hope she catches a bunch of Bluegill on her new Bugger.

Way to go Joel. Start em' young and before long when you are, never mind, a Geezer, she can tie them all for you. Her's has just the right amount of "buggyness" that it should be a hit.

I love watching my children teach their children:)

co-fisher - not a bad idea, I have already started a collection in my fly case just for her.
Jill - You just need to teach her how to knit so I will never run out of warm socks
Lance - Her eagerness to learn helps. With a little practice she could be quite a good tying master
Mel - Cant wait till spring to give those blugills a run for their money
Mark - She calls it a caterpillar and it fits. I plan on giving her a tenkara rod and letting her have a go at it.

I love what you are doing for your children

That girl has so many talents...just like her Dad. She will remember fishing and flying ties when she has her own kids.

Now do you feel old?