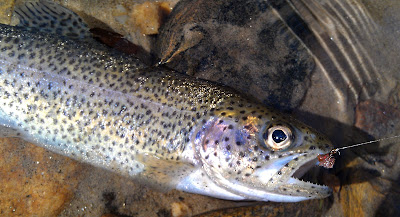 For today's Friday Fly I give you evidence that a fly doesn't need to be fancy or involve a lot of material in order to be productive.

On Monday I tied up a simple yarn bug under the influence of Frank Sawyer and his killer bug.  I had been watching a fishing show on the internet that documented a few of England fathers of fly fishing. Frank Sawyer obviously was a key part of that history and his Killer Bug and simply tied Pheasant Tail are as iconic as any flies fished in the last hundred years.  What amazed me was not how he came up with them but the materials he used to create them; simple wool yarn, and copper wire.
Two materials, that's it.  As a guy that can appreciate the keep it simple stupid thought process, this approach to tying flies struck a cord with me and I dug through my wife's yarn box for something to I could use.  What I found was a Acrylic/Poly blend in light taupe color. 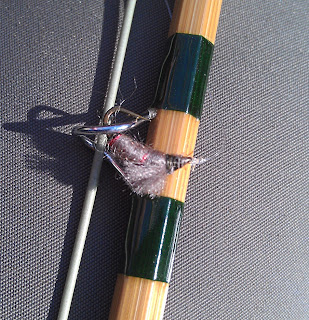 Using some bright red wire I got from the craft store (used for jewelry making I believe), an olive thread, and a #16 nymph hook, I came up with a Killer Bug of my own.  Unlike Sawyers bug I left a little extra yarn near the head and clipped it short as a wing casing or legs, or whatever a trout might think it might imitate.
Yesterday I got a chance to try it out.  After going through a box of previously productive flies and still not having a fish to show for it, I tied it on gave it a shot.  In short order I drifted it deep in a pool below a line of boulders and got the only fish of the day.
I never named it and not sure I should since it is a direct result of watching Frank Sawyer's bio but it might just be different enough to lay claim to a name of its own.  It also got a fish so it has at least earned a place in my box. Maybe the Sawyers Poly Killer? 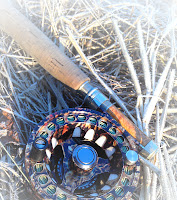 The trip out was also my first outing as the new owner of a Fall river Bamboo fly rod received through the OBN.  I had been itching to get it some action since receiving it but other obligations and a bad stretch of weather had held up any chance of it seeing water.  After spending five plus hours casting it on a stretch of the Saluda river I finally feel that it is mine and am still excited to have such a beautiful piece of work to fish with.

Seems like just about any of the variations of Sawyer's Killer Bug fish really well. I have a couple of Tenkara folks out this way that fish nothing else now and they sure don't have any problem pulling fish.

Joel, I am a big advocate of the K.I.S.S. theory of fly tying. The simpler to tie, the more I can tie, and. losing one on a branch or a sunken boulder or tree limb doesn't upset me like losing a fly that took over a 1/2 hour to tie. Happy to see your success and the fact that you gave that Bamboo a workout.

Midgeman - Sometimes the classics are all you need. I went to the fly shop yesterday and am still amazed that with all the fancy flies in the place I still would end up choosing the simplest pattern of them all.
Rainbow C - With my tying skills, this is a bug I cant screw up. I can also fill my box quickly with flies that work. cant get better than that. and that bamboo got a good workout.

The best flies are those made so simple that they are idiotproof. This passes my idiot test.