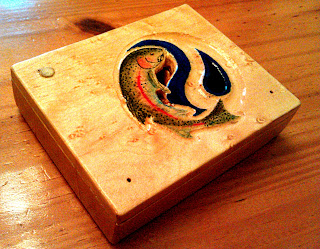 In my last post I mentioned that I recently finished construction of a new Tenkara Fly box.  I decided to copy an idea first forwarded to my by Daniel of TenkaraUSA.com of a box with a 'window' to the flies.  Essentially this window was purely aesthetic in nature and served no real purpose other than airing out the flies after fishing but I thought that it looked really cool so after toying with the idea for the better part of two years, I came up with this creation. 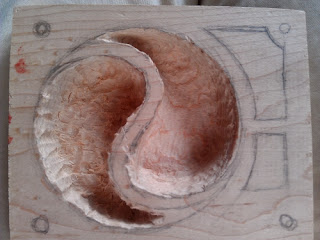 To be clear, I don't think that the Yin-Yang is a Japanese symbol (I believe it is Chinese) but it kind of fits the style of box I decided create.  Besides, it has the look of water drops chasing each other and I thought that was an appropriate look for a small fly box.   Originally I has a bigger vision of a few side compartments for flies but soon abandoned the idea after slicing my thumb with a carving knife while trying to dig out a stubborn piece of wood in the tail of one of the compartments.  If you look closely you can see my blood stained on the left side of the box.  Not the first injury I have recieved at the work bench and I am sure not the last. 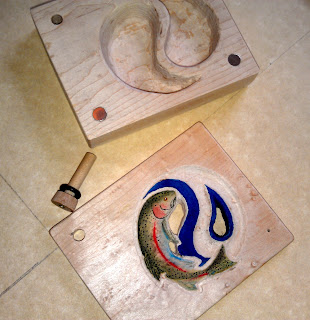 After I carved out the compartments, I moved onto the lid.  Carrying over the Yin-Yang theme, I had a rainbow trout fill in one side of the Yin while keeping a water drop as the Yang.  I sanded it all down after I finished carving and then drilled the holes for the the magnets that keep the lid closed.  I also drilled a larger hole for the wooded dowel that would act as a hinge for the box.  Instead of opening in the traditional why a box usually opens, I decided to go with a slide feature for this box.  The top of the box now rotates on a pivot.  This little choice also made this little box a much simpler piece to construct since it only has three pieces.  The top, the bottom, and a wooded dowel.
For those wondering if the flies stay in the box with the holes cut in the top, the answer is yes.  Typical Tenkara flies and many drys will easily stay in the box.  I wouldn't place any #24 midges in the box but for the 'one fly' idea Tenkara is all about, this box will hold any traditional Tenkara fly securely.

After sanding and smoothing the finish of this box, I painted the fish and the design on the lid using watercolors then I added about five layers of clear coat for protection.  I was amazed how much the clear coat made the colors of the wood, and especially the trout, pop out from the box.  You can probably tell that the wood I used for this project was a Birdseye Maple.  When it was finished I couldn't help to be amazed how good it turned out.  Now if it can only bring me a bit of luck while out on the river.  I really need it.  So far this year I have been out numerous times and have been skunked every time.
Posted by Unknown at 11:23 AM

i LOVE the top! just beautiful! (sorry about the blood-letting!)

Joel, that is exquisite work! I will add it to my post oncreative tenkara inspired craftsmanship. http://middleriverdispatch.com/creative-craftsmanship/
Well done sir!

sweet box, mr renaissance man! you're quite the artist, but I think you already know that.

Mike - Thanks for the compliment

TesWisGrl - just a flesh wound and it was well worth it

Tom - Thanks for the link! I am headed over there now to check out the other creations.

Karel - Renaissance man - I like it. I just like to vary my talents and try new things. That's what its all about.

Really nice! Art for arts sake applied to flyfishing or life...Awesome.Incorporating the rainbow into the design was genius, and the clear coat definitely brings it alive.

Nice work Joel! That has got to be one of the nicest (and most unique) fly boxes I have ever seen.

I am very impressed with everything that you create! You can see that fishing has dominated your life. As always, watch your blog with great admiration. You are to me an artist!

Herringbone - I love the fact that I can cross/combine my hobbies.

Jason - thanks for the high praise. I have seen a few really nicely carved boxes over the years but never been able to afford them so why not make them myself.

Funcfish - when ever I can use an excuse to break out the woodworking tools in the garage I go for it.

Tomek O - Thanks for the compliment and for following this American Southerner in my angling adventures.