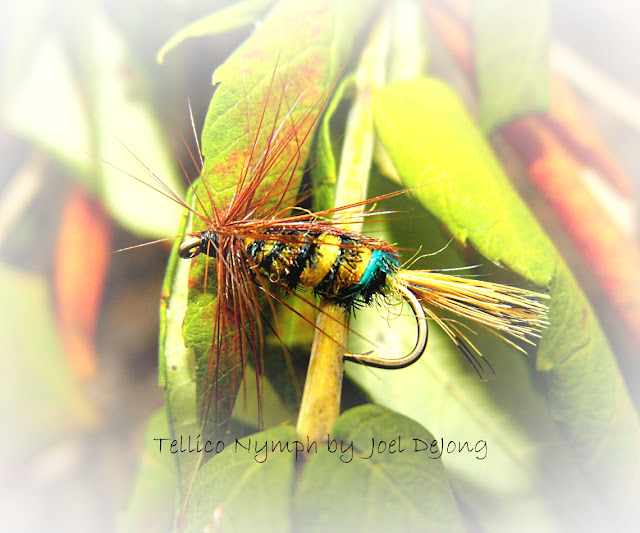 As truly Southern as a fly can get, the Tellico Nymph is a classic that catches trout today just as it has for the past century.  I have been looking for a new idea for this blog to keep my post on a more regular time table and finally settled Fly Fridays. (Yes, I know this post was originally posted on Thursday.  The scheduler on blogspot malfunctioned.....or it was user error)    The idea is to feature a fly with a drawing or two while including the history of the fly and quite possibly a tying instruction to go along with it.  For this first of many Fly Friday post I chose the Tellico Nymph because as a southerner I feel this little guy gets little recognition in today's fly fishing world. 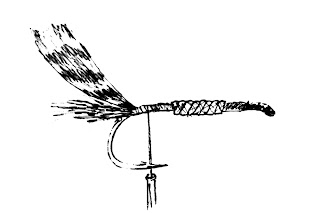 While researching this standard American Fly I ran into a whole lot of historical data that was new to me.  That is not to surprising since this fly was virtually un-known to me till only a few years ago. As with a lot of older flies, this little gem has fallen victim to newer, flashier flies and nymphs.
First thing I discovered was that this little guy was a bastardization of a wet fly - The McGinty, an old bee pattern used overseas to excess.  Another thing I found out was that Hemingway mentions this McGinty in his classic book - The Sun Also Rises (One of my TOP five books of ALL TIME!).  How this fact escaped me over the years is a mystery to me.  Anyway, it seems that in the early part of the last century and late 1800's the McGinty was a standard wet fly readily available by mail order.  When Yankees began to vacation in the south they took this little fly with them and found that the southern trout loved it. 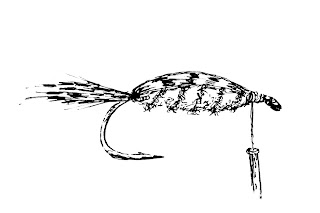 As southerns do, and out of tradition, they flat out rejected the full use of anything from the north but decided that this 'McGinty' wet fly was just too productive not to use.  So in true southern - do it yourself style, a local Tennessee angler came up with the Tellico.
With most old flies, it is unclear just who tied up this very first version of this little bug but I did find out who sold it first  According to Southern  Trout, it was a bass angler and bass bug tier by the name of Ernest Peckinbaug hailing from Chattanooga TN.
Regardless who tied it first or who sold it first, or even who caught a trout on this fly, one fact remains constant, this fly is effective.  I have included a few basic original drawings of mine on how to tie up this fly for the beginners as well a recipe below.  For the photo at the top I tied this Tellico Nymph with a few variations from the original because..... well because that's just how I roll - Southern Style. 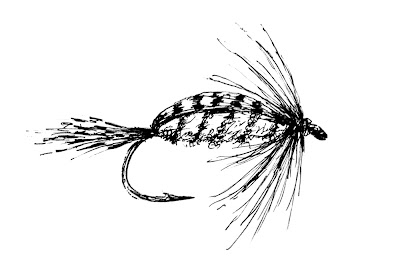 I have found that there are several versions of this fly are floating around out there.  Like anything over 100 years old, people are bound to mess with it just as I have.  If you keep to the basic concept though, any version that you tie up should work regardless.  If it doesn't then head back to the vice to tie up an original and work back from there.)

Also, I have added a video - the first one I've ever done - of me tying up the Tellico.  Please excuse the poor quality as well as the poor tying.  I am not a professional fly tier.... I only play one on YouTube.  Anyway, if you have 7min of your life to waste (I do mean waste and no, I don't give refunds for your time) then Enjoy...


(If you use any illustrations on from this site please give credit where it is due and never use for profit without permission.)
Posted by Unknown at 1:49 AM

Love the idea of Fly Fridays, Joel, and your first post is a winner. I immediately connected with this one because it seems that all my flies, at some point in their use, end up just like the Tellico in the opening picture - stuck in some stream-side weeds.

I've used a similar pattern for Brim and they destroy it.

Good idea for a regular feature, and nice fly choice. I learned some things. Thanks.

Really good stuff. I have spent many, many hours fishing the Tellico River and caught a lot of trout on that fly.

Great post for change of pace. The Tellico was one of the first flies I every tried. I lost it in a tree.

Mike - we've all been there. Of course if it is a fly that I tied a rarely climb the tree to get it. If its a store bought fly I'm climbing that tree - in the words of Hank Patterson "it costs .85$ , that's why."

Kevin - yes they do!

Tomek - I have no idea what you said but I hope it was good. Regardless, I love hearing from my friends across the pond.

Jim - glad to be of service

Ty- no better river to fish a Tellico than the river barring its name. Good on you!

Cofisher - thanks, I'm sure it has company up there.

Love the ol school flies,& the history,the only change I've made is to use a thin skin back,covered with clear cure goo just makes it more non-destructive,tight lines.

David - I am usually partial to natural material but I like that idea! I just picked up some skins the other day and am going to try that out. I also met the clear cure Goo guys at a show last spring and love the finished look that stuff gives to a fly. Good stuff!thanks