It is hard to compress a few weeks of vacation in Illinois into one quick post so I'll spare you the details of my sister-in-laws wedding, the family stuff, the various places we went and people we saw, and I will pretty much stick to the fish I caught.  I will warn you however that this is one very long post.
My first few days was faily uninteresting.  I fished the Mississippi river and caught some white bass, saw about four large Northern Watersnakes swimming the shore line and spent my mid mornings biking nearly 100miles on The Great River Road, a section of which spans from Savana Illinois to Moline.  Unfortunately on my fourth bike ride, and the one on which I had been planning a longer 60 mile round trip ride, I took a 90 degree corner at about 20mph that happened to be filled with loose gravel.  A long and painful story later, I spend six hours in the ER getting gravel removed from my hand and stitches put in.  My first investment when I get home will be a pair of bike gloves so this kind of pain wont happen again.

Hybrid
A few days later, after convelessing on a couch, my brother in-law made it out to fish the Mississippi before the festivities of our other sister wedding.  If you caught my last post then you will remember this fish and the story behind the catch.  If you haven't read it then flip over and check it out or simply check out the photo.  It speaks for itself.  I will also mentioned that I still remains the biggest fresh water (non cat) fish that I have ever seen.
After that catch it was on to the wedding and other family events but as soon as that was over I packed the car and headed up to the Driftless area of SW Wisconsin for two days of fishing that areas legendary brown trout.
I met up with a friend of mine from college and his neighbor and for ten hours we stocked trout up and down this stretch of river that I have only read about.  I was amazed at the amount of trout stacked in this stream.  Pilled up like cord wood in late fall, these wild browns were amazing and for a guy that is use to hunting elusive trout in the low PH waters of the Blue Ridge mountains, these cow pasture and spring fed stream trout were a dream.
Beautifully colored and extremely selective, these trout behaved unlike any I have ever fished.  I was told that the water levels were low for this time of year and that might have accounted for their reluctance to take my droppers but I still managed to trick a few into taking the hook.
I also took some time to help a new fly angler land his very first trout.  After watching him cast to some selective trout, I handed him my rod and gave him a few pointers of shooting line and the pin-point casting (neither of which I can claim to be a master of) and then I cheered with the enthusiasm of a school boy when a trout leaped from the depths and took his sedge.  I even clapped my hands, completely forgetting the still oozing wound from the bike accident.   Its amazing how rewarding it can be watching someone new to the sport hook into a beautiful trout on a dry fly.
From then on we fished for a few hours more and I took some amazing pics both of trout and the landscape. 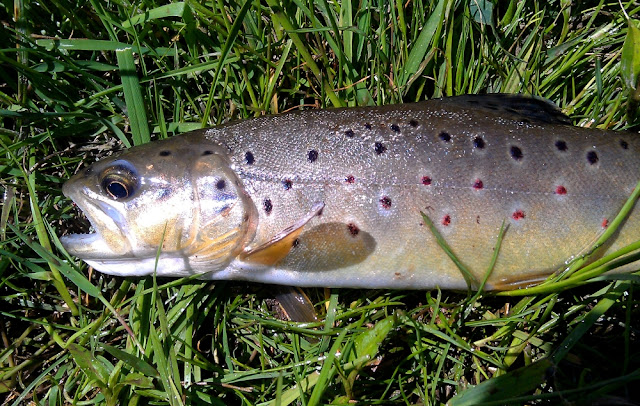 One of the pics I fell in love with was a pic of a thistle that bordered the stream.  The angle in the background was my buddy who shortly after this hooked into a nice fourteen inch brown.

In case you are wondering, these thistles hurt every time you run into them in the tall grass. 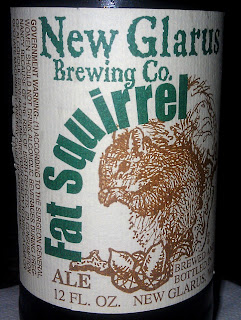 Finaly at 10pm wee checked into the hotel and made our way down to the local bar for some Wisconsin beer and some down home cooked meals.  Sharing stories of the day on the water and the past trips we have taken, we all looked forward to the following day.  This Wisconsin trip was only a two day event but it is just to big to cram into a single post so day two will have to wait.  And if you ever get a chance Fat Squirrel and New Glarus's other brew, Spotted Cow, are two great beers you need to try.  If there are only two things you ever try from the state of Wisconsin, do yourself a favor and try the Cheese and Beer..... The trout fishing ain't so bad either.

Hey Joel, do I qualify as one of those great things from Wisconsin? Sorry about the hand. Looks really painful.

Okay, I know I'm a little weird, but the pictures of your hand and the thistle are my favorites!

Wis-Tex girl. - your welcome. It's good to be reminded of those places from the past. Somehow its more beautiful than you can remember when you saw it every day.

Howard. - I love the thistle pic as well but that one of my hand still makes me wince. It put a damper in the fishing for a good week which hurt almost as much.