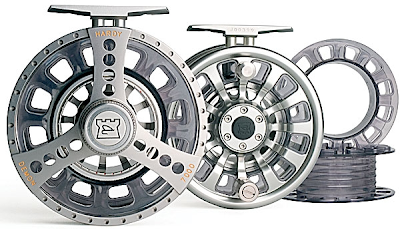 I recently got to thinking of what would be my ultimate gear list.  I don't usually do that but I have this unbelievable bamboo Fall River Fly rod staring at me from across the room (More on that in another post) and it got me thinking about my dream fly gear.  Or to be more precise 'dreaming of my bucket list of fly gear'.
After nearly eight years of fly fishing and collecting gear I still haven't brought myself to spend a whole lot on my gear.  My current list of rods and reels currently occupying a corner of my garage is a motley crew of low end graphite rods, a 40 year old glass rod that is willowy, and a few nicer Tenkara rods.  By far my favorite is a 5/6w rod custom made for me by a friend and labeled as "The Flying Dutchman".  I do love that rod.

My reel selection is another gang of misfit Southbend rejects off eBay, Cortland, and various other lower end reels that perform when asked to but don't do much for the aesthetic value of the fishing outfit.  My best reel is a mid-range Ross fly start that usually is partnered with the 'Flying Dutchman' and a 6w line.
All that being said, I do not believe that a more expensive fly fishing outfit will ever yield you more fish.  I can just as easily not catch fish on a $1,500 outfit as well as I can't catch fish on a $100 setup.  Fishing has little to do with the brand of gear being used and more with the skills of the fisherman and the conditions of the water.  However I know that we all have a few pieces of gear we would like to have if we had the choice and truth be told fishing with a higher end setup is often easier and less frustrating.  Anyone who has ever had the drag on their fly reel suddenly break free and watch as thirty feet of fly line and backing gets ripped off the spool by the current while you are trying to battle a 14in brown knows just what I am talking about.

While surfing the web the other day I came on a few pieces of gear I would love to have.  Over in England Hardy reigns supreme, or at least it use to, so what would be better than that classic piece of machinery.  I found a few at the North East Tackle Supplies and the Fly Depot other online sites that would fit the bill.  The G Loomis rods aren't as old as the Hardy but boy do they make a nice rod.  I got the chance to look these over at the SE Fly Fishing Show and had to wipe the drool from my chin. 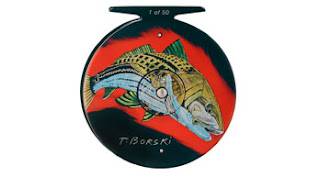 Anything from Abel would be killer but the limited edition ones rock.  Way out of my price range but seriously they rock.  I found this one with a killer red fish on it and.... well what can you say.  Sweet.  Maybe someday they will put my art on a killer reel of theirs..... Now that would be a Dream Piece Of Gear!!!

What would be your Dream setup?

I have to agree with you about not needing expensive gear to have a good time. I know I'll never have one of those $1500.00 fly rods or a $900.00 reel so we can leave those for the guys that have the big bucks. I'm happy with what I've got.

I second what Mark says. My most expensive rod costs $300. On average my glass collection probably cost $40 per rod many of them mint, over 50 years old and typical old glass. I've caught fish on almost all of them.

So give me any one of those rods, any one of my early Orvis reels as long as they balance the rod well, and I'm good.

If I could afford it, I'd probably be a Hardy guy through and through (at least when we're not talking tenkara). But I can't justify that expense, and I'm fine with that.

I'd probably get a realy nice lamson reel and a high end Scott rod.

If I had to, I would give up fishing for a year and use that time to make extra money so I could go thru the rest of my life with a first-rate outfit. Using marginal fly tackle is never justified except for those who are by fate destined to not have even one sip of fine wine during their existance on earth.
I have been a fly fisherman for nearly fifty years, and I know the difference.