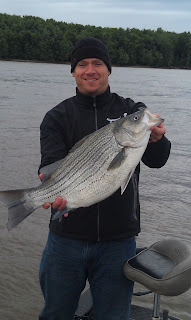 I haven't posted much over the last few weeks mostly due to a lack of things to post about. I have done a fair amount of fly tying, did some fishing and did some art but until today it all just kind of seemed bland.  This morning, with a massive weather system raising the river 2 1/2 feet in 24 hrs and dropping the temps down to a chilly 43 degrees, I met my brother-inlaw on the banks of the mighty Mississippi river just north of the Moline, IL.    We launched the boat with little expectation of catching anything due to the weather but still were eager for the morning on the water.
In the first five minute he had hooked into this hawg and took us on a ride below the lock and dam.  For seven minutes we speculated that he had either hooked into a big channel cat or Mississippi flathead.  What we didn't suspect was that he had hooked into the biggest Mississippi striped bass I had ever seen.  I have fished that stretch of river nearly my entire life and nothing I had ever seen had even come close to the size of that bass.  It was a fantastic catch and I got the video and pics to prove it.
In the end we took the pics, looked around unsuccessfully for a scale, and then let the beast go for another angler to catch.  We never even discussed keeping it and it wasn't till later that I thought what a great trophy that would have made, but me and my brother-inlaw are much alike when we fish.  He still might look down on my fly fishing since he is strictly a spin guy but we two are never late to the water, we beat the sun to the dock, and we simply fish for fun.  The trophies and creel limits are an afterthought and only the pics and memories are what mater. Well done bro.

I think that is the fattest Striper I've ever seen. Way to go guys.

Awesome catch! That could be a good indication that the population is getting healthier. Your pic is trophy enough.

I agree with Mark, fatest striper i've ever seen either. Way to go guys!

Nice! That's thing is a beast. Dam fishing sure is full of huge surprises, isn't it?

Impressive fish! By the way, Im pretty sure that is a Wiper.

Thanks for the comments everyone. After further research David is correct. It seems to be cross hybrid of a striper and white bass which makes the catch ever more impress since the IL hybrid record was only @ 20lbs while the striper record is much higher. This wasn't a 20 lb fish but it was sure up there. We realy wish we would have had a scale on the boat.