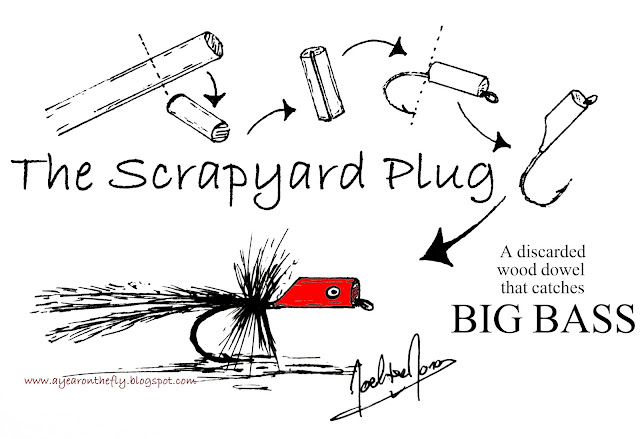 As they say,"The proof is in the pudding" and brother this fly is swimming in it.  A few weeks ago on a whim I cut up a dozen or so small sections from a wooden dowel I had laying around the garage and proceeded to whip what I thought would be a top water poppers.  What they turned out to be was a sub surface torpedo that hits bass where they live. 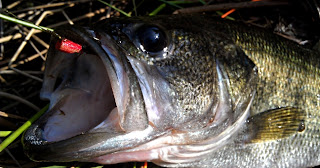 So as a service to my fellow fly fishing and fly tying anglers I have decided to post a quick 'how to' on making this fly.  It is also an excuse for me to share my discovery of old technology that continues to work.  No high density foam or state of the art high tech materials here; just feathers, a hook, and wood.
First off I know what you are thinking, "That isn't a new fly.  I have a dozen poppers like that in my box already."  And that's just what I thought until I fished it and discovered that this fly is no popper.  I had made it to be a bluegill popper but boss , this bug don't pop.  It swims and it triggers bass to bite. 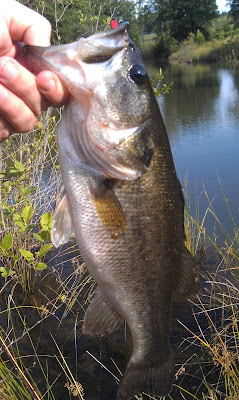 The reason why it does this is due to the density of the wood dowel.  Compared to other popper that use plastic, bass wood, or balsa, the dowel is made from high density wood for strength and as such is a much heavier wood.  When you add the hook, the glue, the paint, and heavy wraps of thread then you get this subsurface plug.
At first I was disheartened by this discovery since I was originality going for a popper.  I proceeded to coat the first few flies with a floatant but that soon wore off and as soon as that popper became a torpedo the bass where on it like a fat man in a donut factory.  I have been out to various ponds since that day and the dowel fly has been a top producer on every outing.
My last trip yielded me a nice 3 lb bass that took the fly like a cheetah running down a juking, jumping north African gazelle.  After a sporting fight that tested the limits a bass can jump once hooked, I landed the him and resolved to give this fly a name.  What I came up with as a no brainier and a tribute to the junk I got in the corners of my garage just waiting to be used.
To tie your own Scrapyard Plug use your own imagination - or try and follow these instructions.  It isn't a hard fly to make but then again the best flies never are. 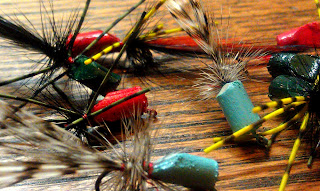 1  - Take a standard wooden dowel from any hardware store cut it down to usable sizes for your hook.   I used a #10-#8 popper hook and a 1/4 in wooden dowel. You want the dowel to be no longer than from the eye of the hook to even with the point of the hook  If the dowel is shorter then that will work even better.
2  -  Using a hand saw or a band saw, cut a slip in your dowel just deep enough to place the hook shank.  This is the most difficult part since the dowel is so small.  I used a pliers to hold the dowel and then took them to the band saw.  A piece of advise is not try to use your fingers to hold the dowel.  You will discover that the saw is sharp and will bite like a barracuda.  Trust me.... it hurts so use pliers.
3  -  Next take the wooden dowel and secure it to the hook shank using super glue.  Do not try and use head cement.  Supper glue is much stronger and will hold the wood to the metal longer than anything else.  I didn't use any wraps of thread before securing the dowel and have had NO problems with loose dowels on the hook. 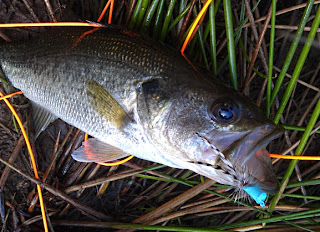 4  -  After the glue has dried - an hour just to be safe - I shaped the back of the dowel in a downward slope.  I used a power tool for this but you can use a carving knife or sander.  Another word of warning... Just be careful because again, the fly is small and your fingers will be close to the workings.  A wooden dowel is a hard wood and is difficult to work in small sections.
5  -  Once the shaping is complete then its on to decoration.  You do this just as you would any popper.  I took mine out back and spray painted them green, red, and light blue but its up to you.  In my opinion you can never go wrong with red.  Bass just seem to love it.  After the paint dries then add the feathers.  I also added rubber legs but have since cut all of them off.  Being a subsurface fly the legs twisted the fly in the water and honestly I got more strikes without them.  I know stick to a standard 2-3 trailing tail feathers and a few wrapped around the back 1/3rd of the hook.  Keep it simple....stupid. 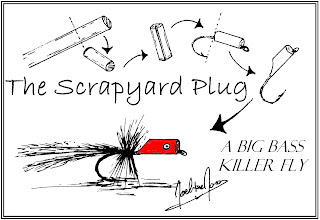 PLEASE let me know if this fly gets added to your bass box and if it works for you then send me the pick.  I would love to know if you find as much success with it as I have.
I know that there is nothing 'new' in the fly fishing world when it comes to fly creation so I consider this a re-discovered recipe.  I discovered this more than likely the same way it might have been discovered back in the day - completely by accident.  It works and that's all I care about.   Enjoy!
Posted by Unknown at 3:12 PM

Since I'm not really a serious warm water guy, I'm afraid I won't be adding it. But...It certainly intrigues me watching you and few others making them. I say great job!

Fantastic! I have a Dremel, some pliers, and a clamp or two, but no paint. I think I can still make it work.

I wasn't a big warm water guy either but that has changed. You should give it a shot.

Thanks. It was a fun one to get in over the reeds.

I think you can too Anthony. Let me know how it goes.

if you want it to pop drill the face with a bit the same diameter or slightly larger.

with the taper to the eye it will dive.

last but not least if you cut your slot deeper (centers the eye relative to the dowel's diameter) and leave the dowel almost as long as your hook shank it will act like a stickbait. with a short stiff leader you can even walk the dog.