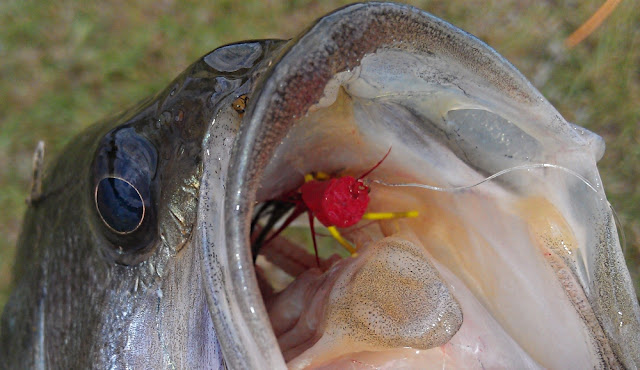 After one of the worst business trips I have ever been on with late and broken aircraft messing with my schedule, I returned home by mid afternoon to find that the family was still at school.  Instead of unpacking, grabbing a cold one, and start to work on the lawn, I reached for my box of newly created flies, my 6 weight rod, and I headed out to catch some bass. 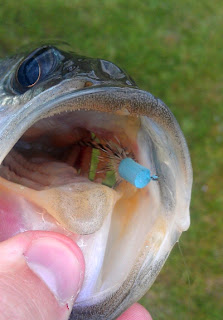 In my last post I mentioned that I had made a handful of bass bugs out of a spare wooden dowel I had laying around the garage.  During my entire four day trip I had thought about these little bugs and could not wait to get them in the water and see how they performed.  Some might say that obsessing over a few bass bugs for any amount of time is unhealthy but you need to remember that any guy that spends hours upon hours casting to illusive fish without the slightest hint of a bite might be already unhinged.  So obsessing over the homemade bugs is normal in a sort of sick way.
Anyway, as soon as I got home I dashed out to test these little guys until the family returned from school.  As you can see, the bugs killed them.  The very first cast with the green bug you see below hooked into a good looking bass and the pictures tell the rest of the story. 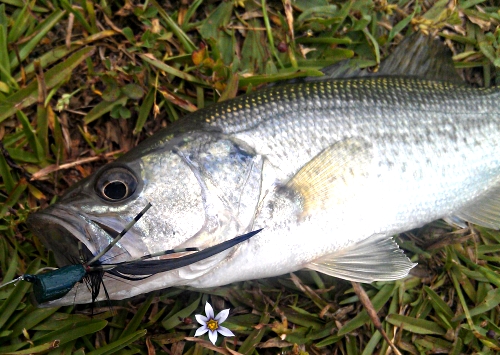 Giving all the bugs equal play was important so I changed them up often and used a variety of techniques to retrieve them.  I found that the bugs seemed to excite the bass the most when retrieved with long under water pulls followed by erratic short quick jerks. 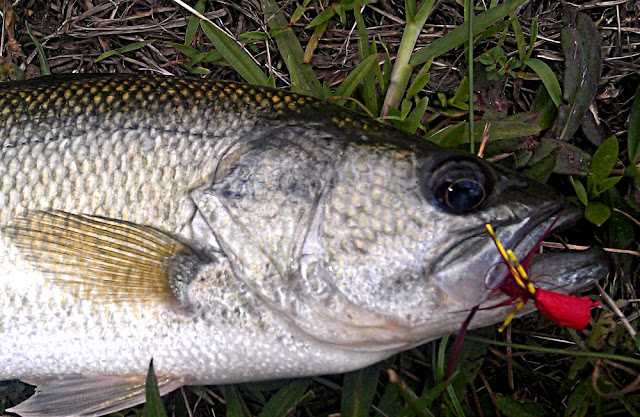 It also seemed like the bass really liked the red but every color caught fish.  One interesting discovery was how they behaved in the water.  I had expected that these little bugs would readily float on the top but what I found was that after only a few short casts, they began to sink.  This I found was an added blessing because that is where the majority of strikes occurred.   I also found that if the fly sunk to low then there was less of a likelihood of a strike.  It worked best when just under the surface, occasionally popping up after a retrieve. 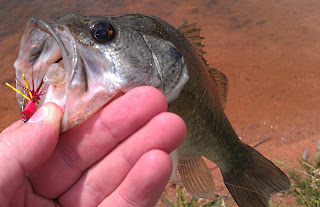 I also found that since the bugs became submariners on the retrieve, they also tended to twist in the water.  I need in the future to try and solve this problem.  I am not sure how to do this so I am open to suggestions.
After some of the bass fishing seemed to die off I headed to an area of shallow water known for big bluegill.  The smaller gills stayed away but a good number of the larger ones where more than happy to take these flies. 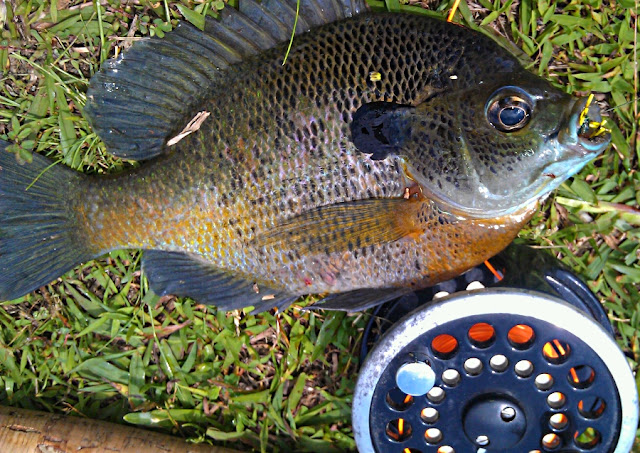 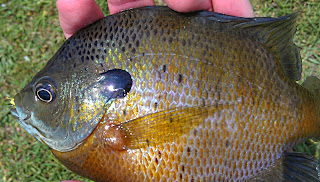 Overall it was a very successful few hours and as you can see, the homemade bass bugs work.  It was extremely satisfying to see the work and the wait pay off.  It made my bad business trip fade into a distant memory.  If you would like to see how to make the Dowel Bug Bass Killer check out my last post titled Improvising Poppers.  I will try in the future to perfect this bug by reducing the line twist while keeping the semi-subsurface action this fly has.  Who knows, I might actually even post a true instructional step by step on how to create this simple bug.
Posted by Unknown at 9:43 AM

Nice gill, I'll have to try the dowel thing. I found lately the bass near my house liked the fly a few inches under the surface as well. I wonder if there is some comfort knowing none of their body will be exposed out of the water.

Still enjoying your projects. I loved the way you decided to hit the water, and your comments on the obsessive character of fishermen is right on. And, nice poppers, nice bass!

You convinced me they work. Oh, and unhinged. Yup, that's me.

Hello,
I am Japanese Fly Fisher.

Could be. It also might be that it simulates a more natural food source. Give it a shot. It works.

Glad you like it. Us anglers are a case study waiting to happen.

I knew the photos would do the poppers justice. A pic of a bug in the gill is worth a 1000 words.

Thanks. I had to break out the hemostats a few times

Thanks for the visit JUN. Keep up the posts.