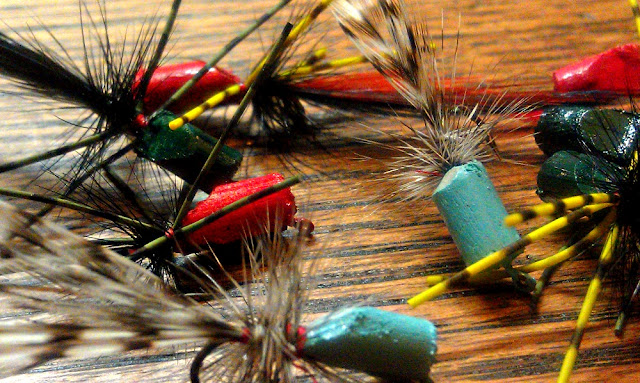 The other day I spent the morning making bass and bream poppers form simple wood dowels.  That's right, I went old school for this one.  Instead of going to the fly shop and purchasing a bag of pre-made poppers, I went out to the garage, found me a spare wood dowel from the corner where I keep extra wood, and cut them into small, popper sized sections.

I then too them over to my band saw and sliced notches in them for the hook placement.  After that I took out my Dremel and did a bit more shaping before I took them over to the vice and attached the # 8 hooks.  After that it was back out to get spray painted them back in to get all the feathers and legs attached.  I was half expecting to test them out this weekend but once again work gets in the way.  Hopefully next week I will be able to test them out. 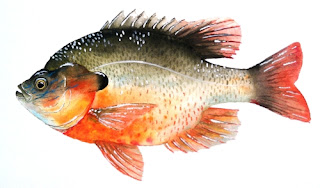 I know a lot of you are thinking why would I go through all the work of making my own poppers bodies instead of just going down and buying pre-made bodies - or for that matter just buying the whole pre-made popper, feathers and all?  I have done that before and they worked good but sometimes you need to create something just to prove to yourself that you can.  So the answer is a simple one for me.  I enjoy the process.  I like to feel that this fish that I catch is  not just being caught on a store made mass produced lure.  Like most fly tying anglers, I like to feel that this fish is being caught by a fly that took time to create.  It is being fooled into thinking that this fly I created is actually an edible morsel.  In the creation of this fly, I am ever more a part of the fishing process and I feel that much more satisfied in every fish I catch.  Its not just about catching the fish, it about how you caught that fish and it goes beyond the thrill of the tug.  It goes beyond just how big a bass you haul in and into how well your creation performed.  (OF course a big bass on the line doesn't hurt the  'process' of creating flies)
On the flip side, if my 100% home made poppers completely fail to catch fish then it is that much more of a realization that the fish just might be smarter than me.  That sort of knowledge hurts.
Posted by Unknown at 10:27 AM

Aaah, the artist shows through. I understand completely.

Nice going Joel. Anytime we go fishing we risk the insult of being humiliated by something with a brain the size of a pea.

Wow, nice! Pease remember to post pictures after you land some fish!

I recently cut down a big chunk of my neighbors cedar tree, with permission. I've got tons of wood and the branches are perfect for different sized top waters I plan on playing with.

Thing is, none of the branches are perfectly straight and I'm not going to try to make them straight. Will be interesting to see if I can make them work.

Why wouldn't they catch fish? Bass and bream eat anything that hits the water at times.

Shoreman - what can I say, I just can't help myself.
Howard - humans have been humiliated by the fishes pea sized brain since before the Greeks tied the first fly. Who am I to change that.
Anthony - you can count on it!!
Ken - true, sometimes they do go after anything but it seems lately that my fish are getting choosy. Cedar would be a long lasting water poppers bet I'm not sure how the fish will take it. It's a wood that has a noticeable aroma and they might pick up on it in the water. Let me know how they work. Is be interested to see what you come up with.