Carving Trout With The Dremel Stylus 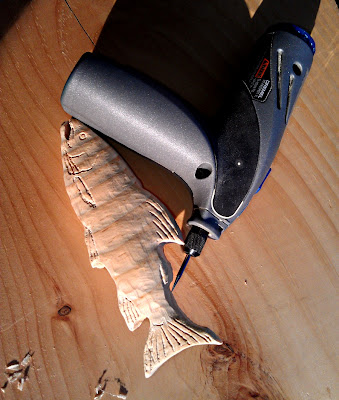 Many of you that follow my activities both as a fly fishing nut, an outdoor enthusiast, and an wildlife artist of sorts have seen my past attempts at wood carving and wood working.  Not the best outcomes but not that bad for my first few attempts.  Given the right amount of time and the right tools I figure I could improve my wood carving skills and so the other day I got it into my head that I wanted to carve a trout.
With the right tools one can do just about anything.  Man could have never have reached the moon without the rocket as a tool to travel and that rocket could have never have been made without the lowly wrench to turn bolts.
My answer for the perfect tool for carving a trout came while walking the isles of my local hardware store. Of course as is usually the case I wondered the store long after I had found what I was originally looking for.  For this reason my wife always gives me strict instruction when I leave the house on a hardware run, but on this day she wasn't home when I left.  And so, without that little cricket telling me to move on past the shinny power tools I paused at the Dremel section and picked up the Stylus.  After convincing myself that this was a tool I absolutely needed, I left the store before any more damage could be done to my wallet. 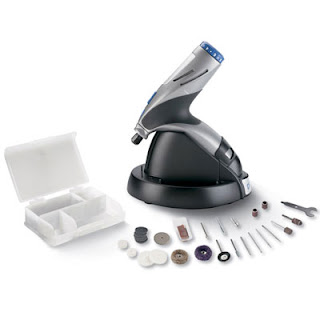 Once at home I went directly to the garage and began testing out my new tool.  The small fish pictured above was the result of my first attempt at using the Stylus and was completed in a remarkably short amount of time compared to my past carving attempts.  The wood I used was just a scrap piece of pine I had from a previous project.  It really isn't much of a carving if you have seen what life long carvers have done but for my first attempt and for the time it was amazing how easy to use this little tool is.  Already I can see a million other uses for this detailing tool other than carving.  It might not be as widely used as my philips head or the hammer but this Dremel Stylus will surly hold a prized spot on my work bench.
This is the second Dremel product I have purchased and it probably wont be the last.  These are great sturdy tools that perform as advertised.  For anybody needing a power tool to do detail work, I strongly recommend the Stylus not only for its ease of use and cordless feature but also its variable power adjustment which is more than you should need for any detail work.

(This product review was of my own accord and was in no way influenced or endorsed by Dremel Company.  That being said, If they would like to shoot me some free gear or attachments for the stylus for me to test out I would never turn it down.)
Posted by Unknown at 8:40 AM

how cool! paintings and carvings and ties! :)

Thanks for the review and Nice carving! Cant wait to see it painted!

I have three Dremels, wait only two. I killed one the other day. It was he one with the door shaving attachment. Guess I put too much pressure on it. Anyway, maybe a different wood is what you need for the fish carvings.

Beautiful piece of work Joel, no matter what you think. Some folks got it and some folks (me) don't.

TexWis - Got to keep it interesting right:-)
JohnnyU - It will probably be a while before that happens. It is currently sitting on my bench with about five other projects.
Shoreman - My next carving will be a better wood. Pine is not known for its tight grain or quality but for testing, it was the first piece of scrap wood I grabbed. Sorry for the loss of your tool. Just another excuse to hit the hardware store right;)
Howard - I sure try but believe me that this little tool not only speeds up the process be also can make you artisan.
Thanks all for your comments.

My husband ask's me what "Day" I plan to return from my "Trip" to the Hardware store!! I prefer my diamonds on a cutting blade or drill tip! He gave me a Dremel 400XPR for our anniversary a few years ago!!