My Kids And Circus Animals 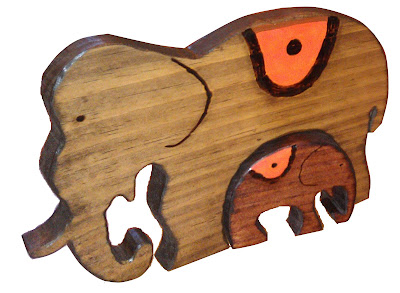 A while back, as you might recall, I was hard a work on restoring a piece of American furniture.  It was a hundred (or more) year old secretary desk original made by the Larkin Soap (and Furniture) Company of Buffalo NY.  Anyway, this post isn't about my sweet desk that I converted into an awesome tying station, its about what my two kids asked for while I was working on this desk. 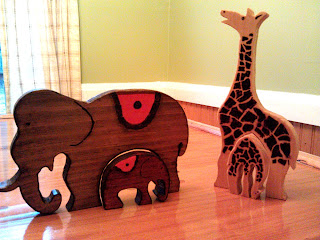 My kids love to watch me working on projects around the house.  Even if their interest only lasts for a few minutes before they scamper off to ride bikes or kick the soccer ball, they always return often to check on the progress of my work.  Well as I was working on this desk of mine, I occasionally had to break out the sander or electric drill.  Watching me hard at work somehow got my little girl thinking and as she watch me she suddenly piped up and asked, "Daddy, can you make me a wooden elephant?"
UMMM... Okay.  I have no idea where that came from but sure, what the heck.  As I was hard at work and in the middle of stripping the desk of a hundred years of grime, I told her "not right now but maybe a little later - when the desk was completed."  After all I currently have five (or is it a dozen) different projects going on at this time in my cluttered garage (three or more of which will likely remain un-completed for years) and the wooden elephant would have to wait, and on with work I went while my little girl went off to torture her brother.
Days went by, then weeks and I eventually forgot about her request.  The desk was completed and so was a few more projects and I again found myself in the garage cleaning up the mess when in from the yard bounds my daughter asking about her elephant.  This request was imminently followed by my 4 yr old boy asking if I could make him a giraffe.   I paused.... then grabbed a piece of raw pine board from the floor and began to sketch.  On I went to create more of a mess before that last one was even cleaned up.  I took a few glances at the web for reference on how these animals should look and then I broke out the scroll saw.
In a matter of an afternoon I had these two creatures roughed out - sanded - and woodburned with the dark details of the elephants ears and the giraffes spots.  The next day I stained them and added a thick varnish and quick as a mad hatter down the hole, two circus animals were complete with their very own little baby animals that fit perfectly between their feet.  No templates or instructions on this little project, just plane old shoot from the hip woodworking.
I'm sure that in a few weeks these simply crafted wood animals will end up at the bottom of a toy box covered and forgotten, they might already be there, but for that sunny afternoon those two kids where extremely happy that daddy had made them their very own elephants and giraffes.  Their joy however was nothing compared to mine and I will savor that memory of seeing their excited faces and returning their thankful hugs.

(and in case you are wondering - no fish where caught that day either.  No matter - the kids would rather throw stick than fish anyway.)
Posted by Unknown at 6:15 AM

Aha, another artistic talent emerges. Being a woodworker, I say "Well done".

this was too sweet! i hope they save those toys forever...

Great toys and great memories.We have a lot of you too, Joel.

JBalk - The Kids like them but they pale in comparison to Jim's woodwork
Shoreman - It might be stretch to call it art but thanks anyway. Anything I can do to make my kids day.
TexWisGirl - 10 years from now they might be able to find them in the back of the closet but I am sure they will last longer than the last AA battery operated P.O.S. that they got. Thanks for stopping by.
Mom - Thanks

Love this post! Such a worthwhile and beautiful gift! Brenda