A Great Fly Fishing Show and A Winner Of Towels

This past weekend I was lucky enough to have a little time on my hands to make the long journey up the Raleigh North Carolina to attend this years Fly Fishing Show.  This is the first one of these shows that this angler has ever attended (don't be to shocked) but let me tell you that it wont be the last.  I had a fantastic time and mainly spent my time wondering around the floor in amazement.  Shortly before I left I hooked up with the events website to see who all would be presenting at the show.

I found myself a bit disappointed that mister, Hopper Juan Ramirez was not going to be there, or Daniel from TenkaraUSA, or many of the other internet anglers I tend to stalk uh, I mean follow online.  But I did however see a bunch of other names that I recognized and was optimistic that I might actually be able to put a face to the names.

So early - we are talking at 4am - on Saturday morning, I headed to the airport and boarded a plane for Raleigh.  When I arrived I immediately started to wander around from booth to booth looking in awe at the vast array of fly tying geniuses that were their.   Awkwardly I made my way around nodding at the tiers and gawking at their magnificent creation.  The first booth owner I had the courage to stop at and talk to was Bruce Corwin and what drew me to talk to him was his displays which were beautiful flies on watercolor backgrounds.  After a pleasant conversation, mainly consisting of me slobbering over his work, I moved on to the next table and found a man after my own heart. 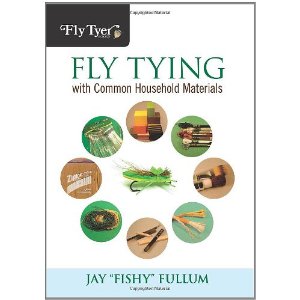 Jay 'Fishy' Fullum.  Some of you might know Jay from his assortment of books titled "Fishy's Flies" or have at least seen his regular articles on how to be an innovative fly tyer in Fly Tying magazine but what drew me to Jay's booth was his beautiful flies and his great looking watercolor.  Striking up a conversation was quite easy since we seemed to share a common language.  I slid him one of my cards and we had a great conversation on art and fly tying.  Later in the day we talked again about Tenkara and our mutual love and discovery of the style.  I then showed him my recently completed Tenkara box (More on that in a later post) and he instantly gravitated to my new segmented Olive Sakasa Kebari tied with "Stretch Magic".  Immediately he began to whip out his material and I watched him tie up a great version of this classic fly.  For those of you that like using household material in tying and are creative with what you use, I picked up Jays new book pictured above.  Of all the stuff I purchased, this was one of the best purchases on the show.  I even found Jay had dedicated a chapter (#24) to using 'Stretch Magic'.  To me this is completely amazing since I just found out about this material a few weeks ago when I raided my wives craft case for beads.  I guess this cord stuff isn't such a secret after all.
After harassing Jay long enough, I moved on to the Triangle Fly Fishers TU booth and met a few people I have only heard about.  I had donated a painting and some prints to this chapter a few years back and it was nice to meet a few of the owners of my paintings and prints.

On down the line I again met some folks I knew, or at least had been following for some time.  Carolina Fly and Clear Cure Goo were sharing a booth and it was nice to put a face to the products they put out.  While breaking it down with them, up walks a fellow blogger I had never officially met but had shared emails painting with for a few years.  Kevin Frank of Fishing According To Kev turns to me and says, 'Are you Joel from The Year On The Fly?'.  Instantly we start catching up and discussing how great the show is going.  He even gives me a little tip on some great cheap material down the line on how to make a great little bass bomber.

Another great guy I met for the first time was one of the guys at the fantastic online Zine Southern Culture On The Fly.  I was amazed that he actually knew who I was and had been stalking ... following my blog for quite some time.  I also found out that these guys were located just up the road from me and as often time happens the seed was planted for spending a day chasing blue lines in the NC mountains.   He also floated the idea of submitting some stuff for the magazine.  My response was.... (Stutter) uh, you want me to do what! uhhh sure, hell ya!! 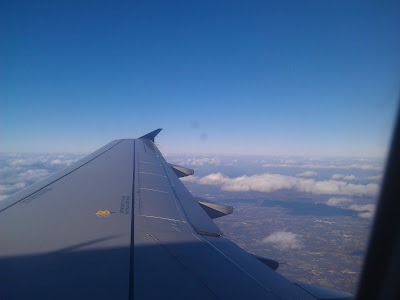 Overall it was a fantastic day!  My only disappointment was when the hours passed my, my time to leave drew even closer.   Unfortunately I was unable to attend the Film Festival which I heard was great.  At the end of the day I boarded my plane and headed back to SC with my head full of memories and a backpack full of stickers, books, and tying material.  I met many others, some of which I am sure to mention in later posts, and got to test out some new gear and listen to some great lectures.  This wont be my last Show I attend and maybe next year I can meet even more guys that share my passion.
WINNER!!!!
As for the winner of the Light Load Towels.  I was originally suppose to post this on the tenth but my thoughts of the Fly Fishing Show got in the way.  I am sure you all can understand.  Anyway - without further delay, the Winner selected by the RNG is Jason Porter.   Congrats Jason, I'll be in contact with you soon to ship these out.

Joel, glad to hear you had a great time. I've never met a fly fishing show I didn't like.

So sorry I missed you, Joel. I manned that very same TFF booth this afternoon. Maybe next year...

Can't wait for Pleasanton on the 24th.

Hey Joel, It was great meeting you. I hope you got one of those stealth bombers, they sold out that Saturday. A bunch of people were bummed on Sunday. Holler out me when you plan to be in this part of the woods again. We'll go fishing.

Howard - it was even better for me since I was able to meet some people I've shared emails with over the years.

Mike - hopefully next year , or maybe I'll come up sometime this year to sling some bugs.

Shoreman - that should be a great one!

Kevin - I might be responsible for that. I certainly bought more than my fair share but at that price I couldn't resist. I will absolutely look you up. You me and Mike can go after those bass I've seen on your blog.

You really did have a great time mate!These events are always a pleasure to be a part of.