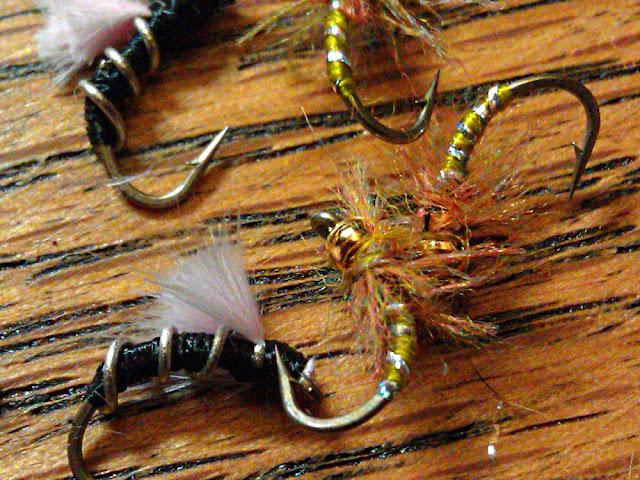 I have mentioned in past posts that I was upgrading my fly tying station from a portable chest to a full fledged desk.  There is no real art associated with this post but I am happy to report that as of yesterday, my project is complete and last night I tested it out with a few fresh midges. 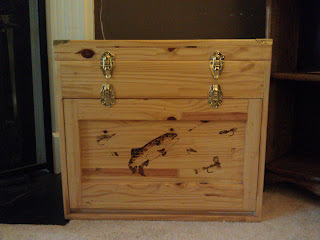 My first box for storing my fly tying material was a simple twelve by ten by ten wood box that I quickly out grew an material began over flowing into a many shoe boxes.  My second attempt was a large chest I constructed from knotty pine (pic to the left).  I was very proud of this chest with its fold down table and inset drawers and wood burned fly fishing scene but as my hobby grew and material collection expended, I again began to fill bags and boxes with the over flow material.  I also got tired of lugging the box up onto the coffee table in order to tie up some flies.
Late last year I made up my mind to begin looking for a replacement for my chest.  I settled on a what was once a very popular form of desk called a secretary.  These desk are perfectly constructed for the novice fly tier since they have usually have  a drop front desk potion and numerous compartments to hold fly tying material. 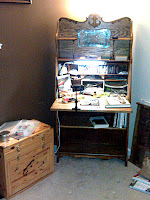 I also like the fact that many of these desks have built in book shelves and with the drop leave table, they hide the mess of fly tying.  An added bonus is that most of these are antiques and are no longer manufactured.  I did toy with the idea of constructing my own version of the secretary but with the cost involved in procuring good wood I chose to spend the money on a classic piece of American history.
This particular desk was made by the Larkin Soap & Furniture company and in 1890 sold for about $3.50 brand new.  It was also given out to housewives that sold more than $10 worth of soap products as an encouraging to start their own business.  If one looks up the history of Larkin you will find a company dedicated to the lives of their employees. 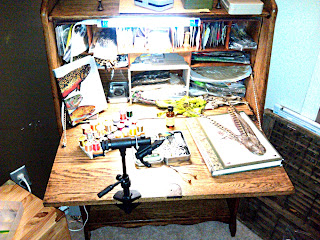 Last night, after a month of slaving away at work, I finally had some time to finish the restoration of this beautiful desk.  With the rain falling outside and the temperatures around mid thirties, it was a good quiet way to spend an evening.  Soon after moving it into the house, I filled it with much of the overflow from my tying chest and settled down to tie some flies and drink a few beers.   I was glad that it performed as good as expected and look forward to utilizing this piece for years to come.
Below I have added a few pics showing off a few midges from last nights tying.  I'm not saying that the desk had anything to do with it but I believe that these were vast improvements on my last tying attempts at midges.
I'm not sure what to call this one but as far as a bead head nymphs go, i think it might entice a fish or two to strike.  Maybe you can name it.
These I call January Firecracker Midges.  While emptying my chest I stumbled upon some old material that had wool and small strips of a foil like material inter-woven to create a sparkle effect.  It was a great fine and although I only had about eight inches of material, it was more than enough for these #16 size midges.
Posted by Unknown at 11:50 AM

For the midge, how about "Lemon Drop"? Didn't find anything out on the internet so I don't think you'd be stepping on anyone's toes.

Wonderful workshop! It's no wonder that so great things in it are created!

I like your desk. With cats in our house I could use the drop leaf table. Nice ties; I'd call that art.

Just an awesome job at the bench there Joel...

Small tip bro.. That vise came with a bracket for a left handed tier... If you take that bracket and flip it upsidedown... it mounts on top of the chuck on the vise... This allows you to set your jaws facing up instead of down.. your fingers will be happy!

I like Lemon Drop as a name...
Good call Shorman!

Texwis - I figured you might.
Mark - yes in inches and I love the lemon drop name. That's going down in the recipe book.
Tomek - a good work station doesn't hurt the product
Jim - a house full of kids is a good reason for a drop front as well.
Bigerrfish- I am going to have to take a look at that and how yours is setup more room for the fingers would be good.

Before my dad died, he was quite the fisherman. He would of loved your blog. Have a nice day.

Looks like a great little place to create. Nice desk and nice ties.

Adam - thanks for the visit
Sanders - It is and Cheers back to you.
Todd - I can't wait to see if they fish well. If they don't then they are just another good looking midge that wont produce and I'll add them to my 'retired fly' box.

Another great idea for those of us still looking for our own space to work. Your fishing tips are also helpful.

How about "bumble bee"?