Bluegill And A Popper 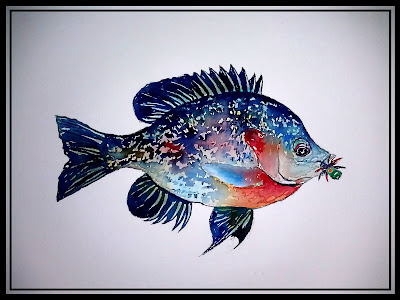 For some time I have been wanting to do a watercolor of a bluegill but have always abandoned the idea for a brown or rainbow trout.  Maybe it is the panfish's low status among anglers or the fact that it often seems that when they are biting it nearly impossible to keep them off your hook, but these little guys are often overlooked or in the extreme case, seen almost as a nuisance fish.  I sometimes fall for this line of thinking but the other day as I caught one of these beautiful fish after another I took some time to appreciate the staggering array of colors and uniqueness each individual fish. 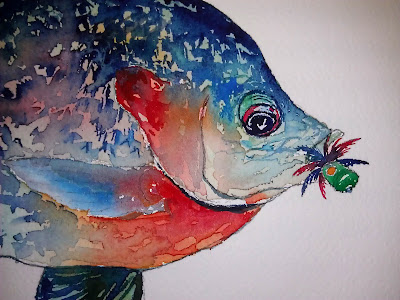 I have never gone so far as to call them a 'trash' fish and I'm not totally convinced that title belongs to any fish (although a few nasty fish might come close) but I have found myself being aggravated when I was hunting bass to have to clean my line of those persistent panfish. 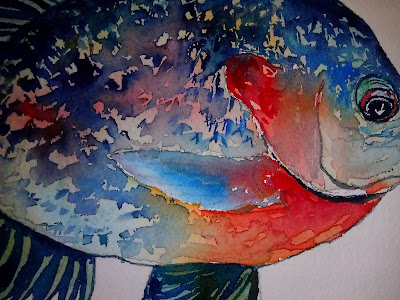 I recently received a comment from a follower on one of my posts commenting on the stunning colors of the river caught sunfish.  I believe this particular follower hailed from Europe if I recall and said that he had never seen one of these before.  He went on to say that this fish would look more at home swimming around the corral reefs of the big blue than some river.  This small comment made me stop and re-evaluate my take on the common bluegill and sunfish.  They are a perfect target for the fly angler.  They attack on the surface with gusto, often fight hard on light tackle, and are nearly always there for the taking.  They are never as finicky as bass or trout, the are in nearly warm water pond, river, or stream, and they display some of the brightest variety of colors of any species of fresh water fish.  I know a lot of anglers that follow blog do go out and target these fish and swear by them as nearly as fun as small stream trout, but an equal number of anglers regard them at best as an annoyance and at worst as a pest.  Well today I celebrate the panfish.  If not an equal then at least as a worthy fish to hook on a fly rod.  If it is something you have never done, I encourage you to take that prized 3 weight and head on down to the local drainage pond or slow water river and hook into a few gills.  Then take a moment to just admire the beauty God has given these fish.  Each and every one will be different from the last and each individual hookup will make you smile. 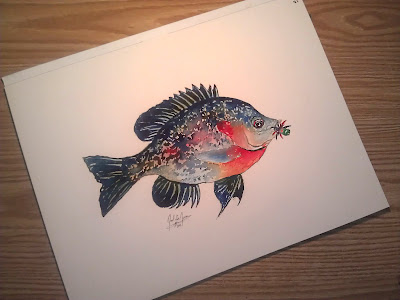 This watercolor is on acid free archival quality paper.  It measures @ 11.5in x 8in and is available for purchase via email.  It will come already mounted in an acid free mat and ready to be framed.  I was planning on doing a progressive photo record of this work but totally forgot about the photos until the work was nearly finished.
Posted by Unknown at 1:58 PM

Bluegill really are great fish. Your art of the sunfish is amazing.

I've been doing a lot of bluegill fishing since it is too hot for trout.

This is a great painting. Keep the warmwater art coming.

Amazing! The colors are spectacular...well done!

Nice! I still enjoy fishing for blue Gill and it's a simple way to introduce new fishers. As close to a guarantee to catch as you can get.

Thanks for all the wonderful comments. Bluegills and other panfish are great fun and its nice to know a lot of people feel the same way I do about fishing them. Thanks.