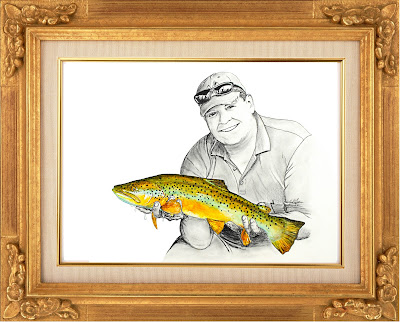 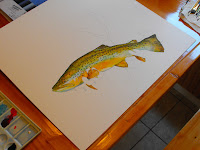 Here is a recent work I have had on the easel.  It was commissioned by a college student for a fathers birthday which was just the other day.  I was going to do a watercolor of this Nice brown but then inspiration hit me and I decided that a full on watercolor of the trout and a pencil sketch of the lucky angler would suit this picture a bit nicely.  Its not a style I usually do but then again one can not grow as an artist (or angler) if one doesn't press the barriers once in a while.
In the end I am pleased with how the work looks as a whole.  So from the angling community and this blogger inn particular:  Happy Birthday Doug!  You have got a fish in your hands that is the envy of many an angler.

Now as for me on the Fishing front.  I have had a lot of relatives cycling through the DeJong residence over the last three weeks and it has got this angler out on the pond a whole lot lately.  In one to two hour stretches, for about six days I have hit the bass and pan fish hard.  Below is a rundown of just a few of the pan fish that have graced me with their acceptance of my fly. 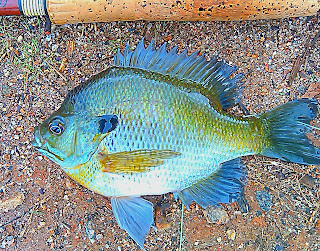 This bruiser of a pan fish hit a number 10 Woolly Bugger like it was the last bug in the pond.  I don't believe that I have ever hooked a bluegill this size in a very long time and the picture doesn't really do justice to this guy.  He was a bit over 8 inches and had a forehead on him like a Frankenstein.  You might notice that you can not see the Bugger in his mouth.  That is because it is half way down his gullet.  With quick work of the forceps I freed it and let him back to rule his corner of the pond.

The next two pics are just a few of the other nicely colored pan fish that I have pulled out of the pond the last few days.  All were either caught on a black bugger or a black popper.  I tried a bunch of other flies and a variety of colors but always came back to the color Black.  They just would not bite on anything else.

The Final fish below is the brightest colored pan fish caught on the fly over the last few weeks.  I am going out again in the next few days, between the rain storms that have pelted the south, and with any luck I will have a few bass and trout pics to share with you.  Until then, keep those flies wet and the reels oiled up. 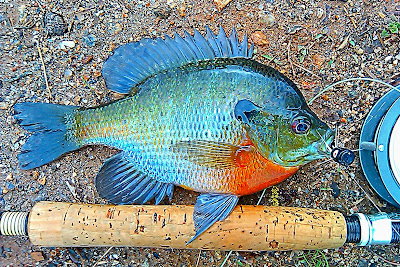 A fine piece of art. That brown, wow.

Those sunfish, are great sport on the light fly rod, this is something I do quite often come the summer months.

The work you do is absolutely beautiful. Love what you did for Rod aka Midgeman! You have a true gift!

What a gift that dad will receive! Brown trout turned out incredibly, and I think the sketch is an awesome change up...nicely done! bluegills aren't bad either...

The effort put into and the quality of the painting is incredible. What a great piece. I love bluegill and those are some beautiful fish, too. I would be all over a painting of the brightly colored one on the last shot.

Excellent piece of artwork. I really like the combination of watercolor and sketching.

Just sat down to read your blog. Nice work son. I like to picture you painted and penned. Some dad is going to be really proud of his son for thinking of him in that way.
Mom and I had a great time visiting you and the fam.

Thanks for all the comments.
Dragging a small popper over a pond and watching those gills explode on the fly is the closest one gets to a trout rise when there is no time to travel to trout waters.
You might see more of this type of portrait in the future. It took a fair amount of work but the end result was nice.