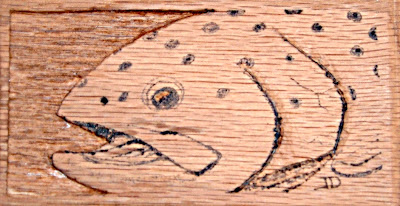 Picture doesn't do it justice but here is a relieve carving of a brown on red oak.  Just a simple carving accented with wood burned shadow and spots that will eventually end up as a lid for a small fly box. 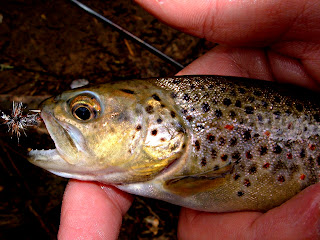 Now I know it has been a while since my last post but I hope the following will make up for my negligence.
The other day my brother came out to visit and we took a trip up to the mountains to fish a small stream for those three trout that make fly fishing so much fun.  Getting up early to load the gear, we headed out with low expectations and an eagerness to finally spend some time trout fishing together.
With a quick stop for gas, some pastries, and very bad coffee we were soon in under way.  I haven't seen my 'little' bro in about two years and I couldn't tell you how long its been since we have fished together.  With the two of us living on opposite sides of the country we rarely get the chance to do to much together and this was a trip I was looking forward to. 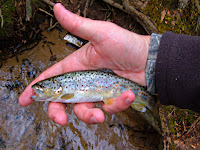 After a forty five minute drive we parked and quickly dismounted.  I grabbed my Tenkara rod and he grabbed the spin rod and we started out for the river. Now before you think that he is not a fly fisherman let me just say that he is but was unable to pack his wading gear into his carry-on.  Why didn't I loan him my gear?  Well he is about six inches taller than 6'1" me and wears a size 14-15 shoe.  Good luck trying to find to many friends with gear to match that frame. So it was an ultralight and some spinners for him while he was strayed dry on the bank. 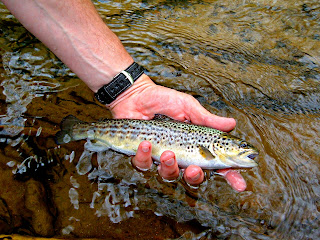 As you can see, we quickly started to hook up with some nicely colored trout. In the first forty five minutes we lost count of the fish we were catching and just kept on going.  I hooked about ten to twelve 7-10 inchers on the Tenkara rod with about as many flies.  Fishing them dry or wet, it didn't mater.  These fish were eager to bite on just about anything and my bro was tearing it up on the rainbow colored spinner.  We both had a hat trick with in the first hour and it never stopped.
After about an hour I ran back to the car to grab my 2w for some streamer fishing.  I was gone about 6-7 minutes and when I got back I was informed that my fishing partner had caught about a fish a minute for the length of time that I was absent. 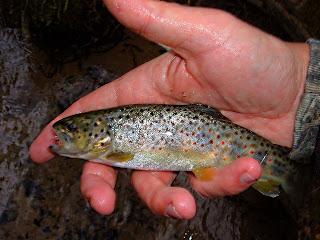 On any normal day on this river I would call B.S. on such a statement but then again this was no normal day on the water and I couldn't string my rod fast enough.  In that time he hooked into two more and lost another.  CRAZY.
I ended up trying out just about every fly in my box just to make it interesting.  Flies I never would break out on any normal day even got into the action.  I didn't want to leave anybody out and for some this was their only chance to see some action.  In reality I would say that I was switching flies just to see which ones wouldn't work.  It was just one of those days that will stick in ones mind for years to come.

And this isn't the only white fin we caught.  I wish I was a bit more ready on the camera but with all the action, the camera is the only thing that didn't get to much action.  Luckily, when I dropped the ball my brother stepped it up for some good shots of both our fish and he was less likely to drop the camera into the water. 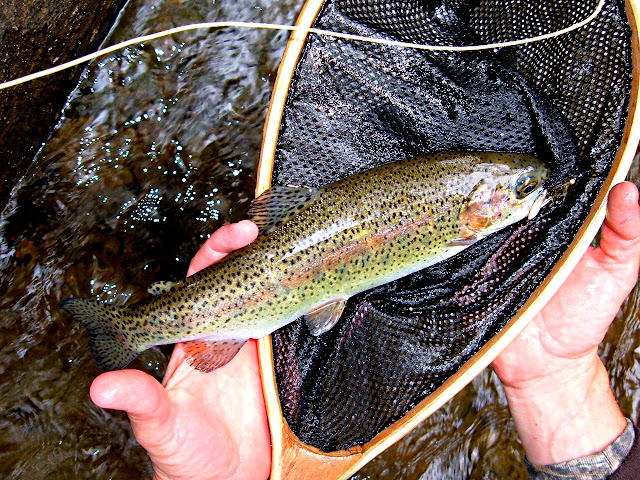 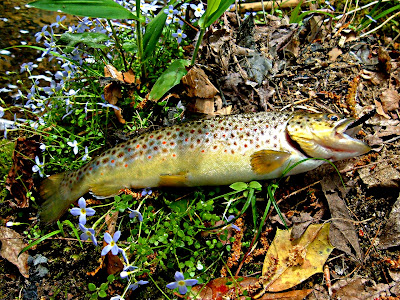 Beautiful water, great weather, excellent fishing, and unbelievable company for a day on the water. 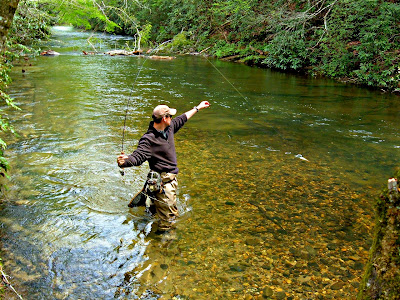 And then with the afternoon day sun peaking and the fishing beginning to wind down I said to my companion, "Just one more cast and then we are out of here.  BAM!

A great fighting brown hooked into my 2w and Black Nose Dace.  Now I'm not going to claim that this was a monster and as you can see it is not a hook jawed beast.  Heck it wasn't even the best looking fish of the day but man it was fun to fight on light tackle in a nicely flowing river. 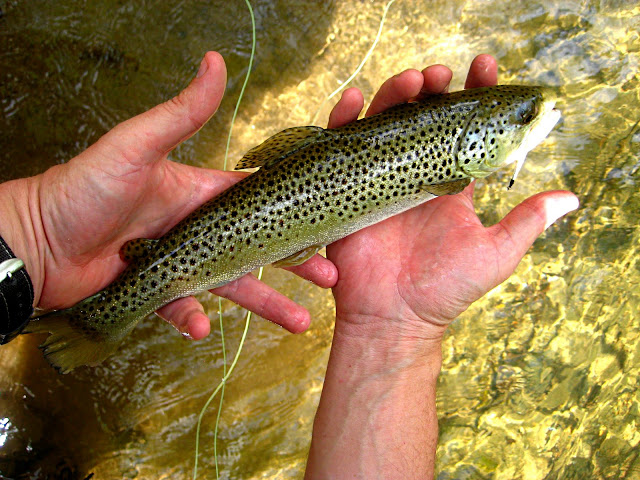 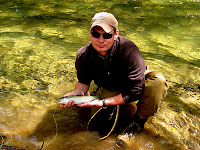 It was a nice fish to end on and as we trudged back to our vehicle and talked about the fishing and how great the day had been, I cant help thinking when I will be able to get the opportunity to do it again with such a great partner.  My only regret is that with all the fishing and my camera in the hands of my brother, I completely forgot to take a pic of the two of us together.  Hopefully when I go and visit him up in Washington this summer we can get that pic together. 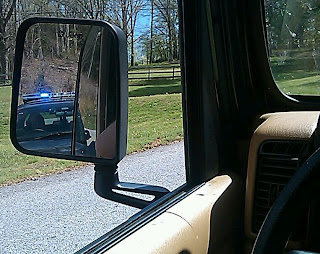 I said it before but it is worth repeating, It was A GREAT DAY.  All told I believe we caught well over 40 fish and even if they were not monsters it was still one of the best days on that stretch of water that I have ever seen.  With high spirits and thoughts of cold beers on the deck in our heads he headed back to the house.  Even a brief encounter with the local Sheriff and a signed memento of our conversation was not enough to dampen our spirits.  I still believe that our catch was more legit than the Sheriff's but he is the law and one doesn't argue with the law.   Congratulations Mr. PoPo, but I still had one hell of a day!
Posted by Unknown at 2:41 PM

Great post with awesome picture. Especially the one with the brookie half out of the water.

The True man for all seasons

Great post. The coloring on those rainbows is spectacular.

Glad you were able to share such a great day with your brother. Pictures turned out great. you'll have to show us the fly box when completed...the wood carving is awesome.

Just adding my pleasure for the job well done fishing and the beautiful pictures, too! Don't you wish you could somehow preserve these types of days and pull them out when the fishing get really tough.

Some great fishing there.
Those trout are beautiful, the browns with those spots, awesome.

But I have a preference for one in particular.

Looks like you had a great day... even if the PoPo tried to rain on your parade. I'm sure being stopped by the law just makes the day that much more memorable.

It was a great day and my nephew asking if "daddy was going as fast as a rocket" only made it more memorable. Thanks for the great day of fishing Joel and I hope I can get back soon.

That was just a sweet post and what a day it sounds like you had out there with your brother sinking the steel and getting tuggud up!
SAAAWEET!

Nice, I wish I could cast at some trout. I have no idea when I'll get after them again this year.

goneFF - One of the few I took that turned out nice.
Strid - back at you
CoFisher- I do like the deep colors on that bow, best bow of the day for me.
Sanders - Thanks, Will do
Mel - That day wont soon be lost from memory.
Brk Trt - It is a nice brookie isn't it.
Jay - The ticket hanging on the fridge is a constant momento.
John - thanks for making the trip, cant wait till we get together this summer for fishing those western Washington waters.
Bgrrfsh- Thanks, It was a freekin Blast!
Kev2380- If you make it down my way I think I could find you a few trout to toss a fly.

Looks like a great outing with some nice fish. too bad about the talk with the sheriff but it happens.