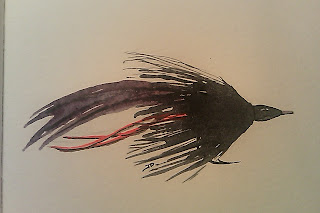 On Tuesday afternoon - in 20 - 25 knot winds - I took what little free time I had and took the wife,kids, and a set of my newly tied flies to the old bass pond. My Little girl had a bobber and worm and I tried to cast into the wind with my 2w fly rod. I was very proud of the little x-hopper I had tied but after 10 minutes of fighting the wind I gave it up and tied on a heavier streamer pattern I came up with on a whim.

Basically its just a long strip of rabbit fur tied with a bit of strip for the tail then wrapped forward. What is great about this little guy is the swimming pattern it has after a short strip. The little tail just keeps swimming as the fly sinks. The rabbit fur I cut myself from a little black and white pelt. On the third cast I hooked this little bass.

It hit it hard and jumped the whole way in. As you might be able to tell, not very big but very satisfying to know it hit my own version of a rabbit strip streamer. Anyway, by this time the kids had had enough. Between my casts I was recasting my little girls worm to deeper warter because the wind kept pushing it. After a while she became more interested in throwing sticks into the waster than fishing so I gave up on fighting the wind and decided that it would be better to play with it....

Kids love kites, and so do grownups!
Posted by Unknown at 6:45 AM

Nice job of placing a hook in a fish mouth. you had confidence in that rabbit strip while cutting it didn't you? confidence catches as many fish as the rest of the crap we carry.. good shot of the kid flying a kite man!!

Hey, Great little story. I miss going fishing with you and we did not do it enough when you were younger. Keep going with the kids Joel. It is something they will never forget.