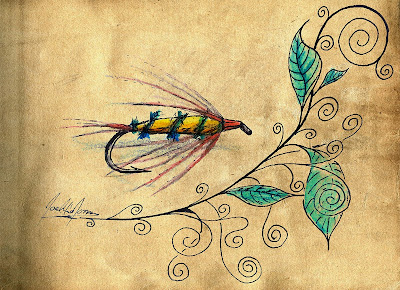 The Tellico Nymph is quite possibly the most iconic fly of the southeast for trout.  I have done a few posts on it in the past and it has been well documented by various other southern trout fishing sites but in case you haven't heard the story - here it is.
No -one is quite sure when it was created or by who but it was believed that it originated from the banks of the Tellico River in Eastern Tennessee.  The going theory is that in a true to form Southerner style, local fisherman prior to the early 1900 morphed a classic wet fly imitation to suit their needs.  Many believe that the bright yellow yarn or floss body was meant to simulate the giant yellow stone but the more likely scenario was that a local angler attempted to combine the wet fly with a type of food trout love but isn't viewed as a very sporting type of lure .... corn.  I don't know if this story is true but if a corn chucker ever wanted a better imitation that could be casted with a fly rod then they would have to look no further than the Tellico.  If you ever find yourself in the south then make sure this little guy is in your box.

The other day I came down with a bit of a flu bug and find myself confined to a couch without much energy to do anything.  Consequently I have been doing a bit more sketching and reading up of fly fishing techniques.  Thanks to a Christmas present from my wife in the form of a mini blender, I have also mastered the art of making the perfect vitamin C / antioxidant smoothy to help fight the bug.  Its amazing how good old healthy food makes one feel.  I believe the trick might be in grinding up the orange ( rind and all) with a load of blueberries, a banana, and some baby spinach.  Nothing can cure a virus outright - I just got to let it run its course - but the vitamin rich drink just might shorten my down time. 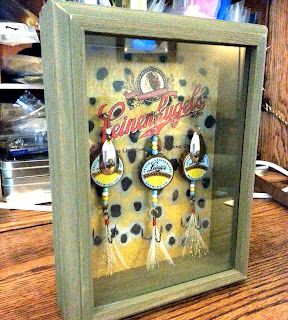 One other thing I have been meaning on sharing for a while was a little gift I received at our annual 'make a present gift exchange'.  Pairing the bottle caps from one of my favorite beers, a friend made up these very attractive lures.  Framed up in a shadow box, this is a great addition to my fly tying desk.  Thanks again - I love them.

Nice. I grew up in east Tennessee and spent many fine afternoons fishing the Tellico River and its tribs. Even guided off and on up there for a few years. The Tellico nymph works well there and on most streams down here. Thanks for bringing back some great memories!

The Tellico is a good high country fly too. Cutthroats like 'em. Thanks for the story.

Interesting take on the Tellico's representation.

I hope you feel better. The Tellico is a legendary fly. Strangely I have never caught a fish with it. I can't say I've fished it much though.

Leigh - Cheers
Carp A. - thanks and your welcome
Lester - Those cutts might jsut mistaking the Tellico for a drowned bee. I had a few nasty bees harassing me while fishing cutts in Idaho.
Brk Trt - Always trying to mix it up.
Kevin - Thnaks, Its sometimes spotty but still its a must have in any Blueridge anglers box. I'm going to try to make the FFS in W/S this year - hope to see you there.