The American Cutthroat - A National Treasure 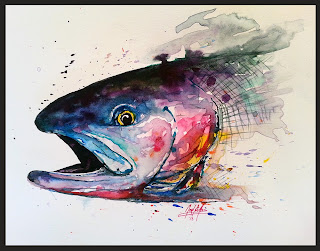 The Cutthroat Trout is an absolute favorite of mine as it is with many an angler.  Unfortunately my ability to hook into these great trout are severely limited due to simple geography.  Despite a work schedule that has me roving around the country, my chances to get out west to fish in the habitat of the cutthroat is severely limited.  All that being said, I still love to dream and paint these iconic fish.
For my eastern counterparts I will provide a little education on this truly American Trout.  All 14 plus subspecies of cutthroats are native to North American and have a habitat that range from a North west sea run species on down through the mountains of the south western United States.  Depending on the water in which they dwell, the Cutty can have a wide range of coloration but all carry the distinct reddish slit of red below the upper jaw. 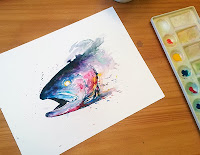 The larger set of Cutthroat are typically of the sea run variety and can reach sizes in excess of 20lbs while most landlocked river cutthroats are limited to a maximum of 2-3lbs.  Due to the geographical isolation of a few groups of these beautiful fish they have developed a few distinct subsets that are now listed as 'threatened' due to loss of habitat and the introduction of competing species of trout such as the prolific rainbow or lake trout.
While I was in Yellowstone this past summer I got to talking with a game management officer on the fate of the Cutthroat in Yellowstone lake.  A number of decades ago the Lake Trout was introduced by some yahoo that thought it would make the lake a better fishery.  Well If you like catching the sluggish Lake Trout over the beautifully native Cutthroat then it was a successful introduction.  However if you value the preservation of an American treasure, the introduction of the Lake Trout has been detrimental to the lake. 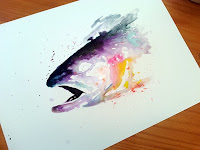 Not only does the lake trout have a longer live, and as such a breading life, it also preys on the young cutthroats and cleans out the food supply normally used by the Cutthroats.  In short, the Lake trout is quickly out-pacing the native fish for habitat.  Left unchecked the lake will soon be devoid of all cutthroats.  Today however the park officials have instituted a program to check the population of the lake trout in Yellowstone.  Using large nets they set them at a level that targets only lake trout and not the cuts.  Through sanctioned and controlled fish kills of the invasive trout, the project has checked their numbers and given the native Cutthroats a fighting chance. 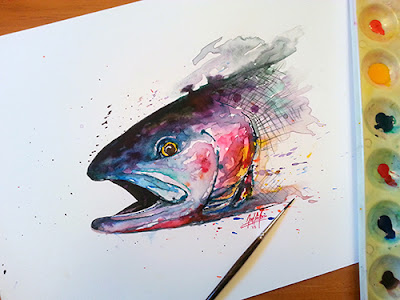 For this painting of a Cutthroat Trout I have chosen to go a different direction then you normally see with my paintings.  With a uniquely brisk movement of brush strokes I gave this piece an effect that one can only get through the use of watercolor paints.  Letting the pigments flow with abandon then coming back with a few detail strokes I was able to give it a bit more definition.

Finally, I saw this in the paper this morning and I thought since it was about the only thing good in the newspaper I would share it with you.  Enjoy the rest of Your week!

I remember when I was very young, it was still possible to catch cutthroat fairly regularly. It's sad to see what has happened to so many of our native species. Nice work Joel

Thanks Howard. You are still in an area I'd love to fish. Quite a few species we can't get out here in the east.