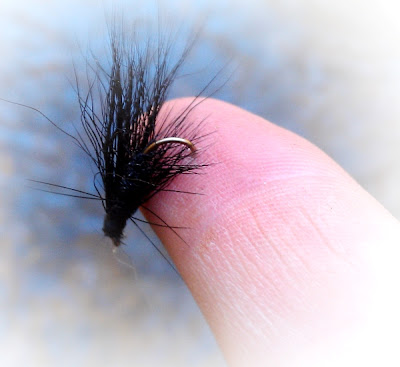 Its Fly Friday again and time for me to do a blog post on one of those flies that lacks a traceable history.  Despite a long internet research, I was unable to locate the first angler to tie up a black caddis. 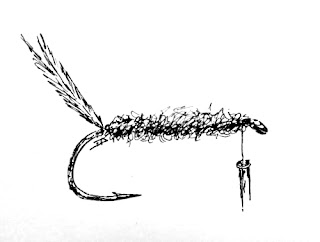 This is not to surprising.  The black caddis is just on of those flies that come to life.  The truth about this flies origin is probably more natural than one might think.  I am sure that as the Black Caddis Fly hatch was watched by many anglers recovering from a long winter ans the pattern for the fly was conceived by many anglers over a period of time.  Its creation is so obvious to one who has tied a caddis fly before that it is as simple as adding color to match the actual fly. 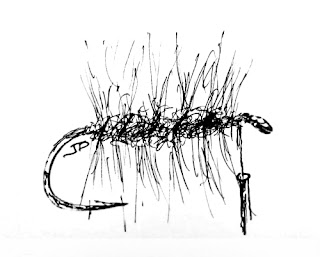 One thing is certain, when mothers day rolls around and the first flies of the year are hatching, the Black Caddis is one of those flies that hungry trout go for.  Hatching when the stream temps reach @ 50 degrees, the Black Caddis will be a pattern that is sure to produce, but I take it a step further.  I have used this pattern in late summer and fall with enormous success.  Not only does this pattern mimic the caddis fly to a T but it is also a very effective pattern for terrestrials.  In smaller sizes this black fly can look like an ant, beetle, or even a spider to the hungry trout. 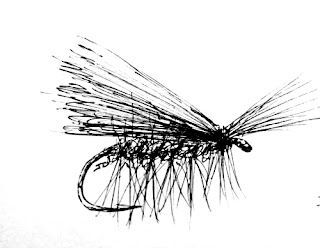 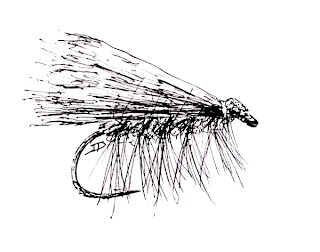 Tying the Black Caddis is fairly simple even for the beginner   In fact, after the woolly Bugger, this fly was my first fly I tied that caught a fish.
- Start by securing the thread to your hook and then attaching a black hackle to the tail of the hook.
- After wrapping the shank of your hook with fine dry fly dubbing, secure the dubbing near the head and then work on wrapping the hackle forward.  Be careful while securing the hackle to allow for enough space between last wrap and the eye for the overwing.
-  Using a hair stacker, even out a pinch of black elk hair and secure it on top of the fly.  Tie off the thread with a few half hitches and add a small touch of head cement to thread.
-To finish this fly off, simple trim the excess hair near the eye at an angle to match the slope of the wing.

I recently used this fly with great success in the 'mountains' of SC (those out west please hold your laughter.  I know what you are saying, 'Our mountains are your mole hills.').  Not only did this little fly destroy the Brookies I was hunting but it managed to catch one larger species as you can see from the above photo.  I think it is called a "Dopeious Idiotious".  I ended up fighting with that odd species for a long time till the hook came free and he got away.

Good fly on the Big Horn too, in Montana, at that time of year anyway. But I can never see them. So I like to fish them behind a bigger white winged October Caddis. If I see a dimple behind the big white fly I set the hook