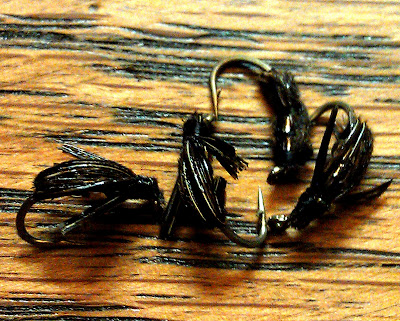 I'm not one to usually hand out tying instructions and often times you will find me looking through blogs and YouTube videos for direction for myself but the other day I stumbled upon on idea for a great little water bug.  The idea came from reading about the little water-bug called the boatman.  I have never really given them much of a shot when I have fished these little guys before but after doing a little research I may have found out why.

What I discovered was that these little guys frequently rise to the surface to gather air under their bodies and then dive down to the bottom of slow moving parts of rivers and lakes.  It struck me that this 'air pocket' has been missing from nearly ever pattern I have ever seen.  For a time I forgot about this tidbit until I was at the craft store with my wife the other day and I saw these tiny glass beads that looked just like water / air drop-lips. They were the perfect size for small hooks and 'Bonus' they were half off.

I started off with centering three small beads on the hook - building up material in front and in the back of the beads. 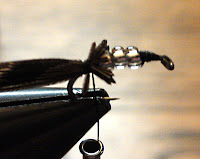 I then took a small bundle of pheasant tail fibers and secured them behind the last bead.  I allowed a small amount of fibers to spray out hoping that it will give the insect a bit more life.  After tying off the black tread in the back I moved to the front of the bug. 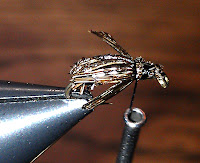 The rest of the bug is simple made pulling the fibers forward to the eye, splitting the fibers, and then tying them in the boatman leg style.  I finished this little bug with a layer of clear varnish to hold the fibers together.

Not a hard bug to tie at all.  In fact, I whipped out quite a few in a very short amount of time.  If you look at an actual boatman, this fly is almost spot on and I believe that the beads will pay off while fishing these bugs.  Of course this all depends on the fish but I figure if the trout don't like them then the bluegills will eat them up. 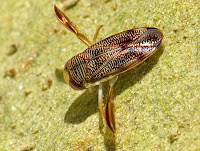 On a side note, I actually got out to do a little fishing this week both at the trout stream as well as the bass pond.  Unfortunately even the usually productive pond came up zip.  There was a few exciting moments on the stream however when after four hours of searching for fish, I stripped a blue buck tail streamer (a variation of my favorite black nose dace) over a submerged rock and got a nice trout to leap clean out of the water.  He did this another three times as I tried to hook him and on the fourth strip I hooked him........ For all of a half a heartbeat.  He quickly shook the hook and swam off never to return.  Oh Well - Next time I guess.....
Posted by Unknown at 6:58 AM

really nice tie, but I can't ever say I have seen a trout take a water boatman before...

Awesome!-- I've been looking for a simple boatman that shows the air bubbles properly-- I'll have to give this one a try. As a side note some uv flash wrapped on under the beads might accentuate the bubbles.

Nice looking fly...I havn't ever tried a water boatmen pattern but as common as they are on some of my waters I'm sure they've ended up in a trouts stomach on more than one ocassion.

Hey Joel. I was just reading about these little guys in my new Entomology book just yesterday. They have some flies that they show as imitations (Corixid & Corixa Bug), but they are not nearly a good as yours. A great job and a great imitation.

JMP - I've never had much luck either but can't actually say I have given them much of a chance. Maybe I'll do a little Tenkara style fishing and see if they bite.

Brian - I think you are onto something there. Next set will have UV Flash beteen the beads. Great Idea!!

HighP.D.- I have seen them on my streams as well and seeing how fish eat nearly all things buggy and aquatic - why the heck not.

Shoreman - First off - thanks.
and second - I would be interested to hear what book that is. I'm always looking to expand my knowledge base and I need a good reference bug book for the desk.

I can also recommend a book-- it's one of my favorites: "Fish Food" by Ralph Cutter-- a small inexpensive book, easy to read but is packed full of great information.

Joel I've been looking for a great boatman fly for years. You've nailed it. Thanks!

Great idea using the glass beads for abdomen. I have the hooks, the PT, and the beads. This fly is next at the vise. Thanks for the creativity.

BrianJ - Great book! Its on my to get list.
Howard - Glad I could help out. I hope it hooks into a few fish lips for you.
TTChron - Glass seems to really make the boatman come to life. Hopefully the fish will agree.