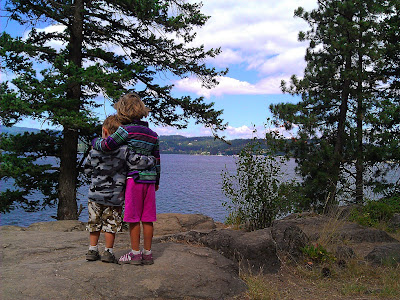 My kids rock!  This was a pic from the first day of our trip out west.  It is on a point overlooking Lake Coeur d'Alene in western Idaho (which coincidentally is fed by a killer Cutthroat river I fished a few days later).  We had taken a little hike out to this breezy point to toss rocks and watch the waves.  Just stunning.  The kids did great and had a blast.  I am sure this is a pic they will look at later in life and smile. 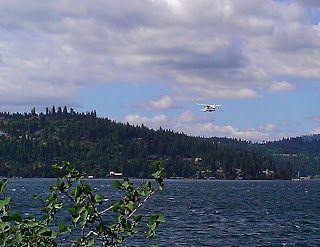 As a bit of a aviation nut I also enjoyed watching the small plane that was doing touch and goes on the 30knt chop.  sorry the pic doesn't do it justice but there are limits to what a cell phone will do but still, I am impressed with the quality this new phone has with its camera.  I believe its an 8mg camera and take real sharp photos as you can see from the pics on this post. 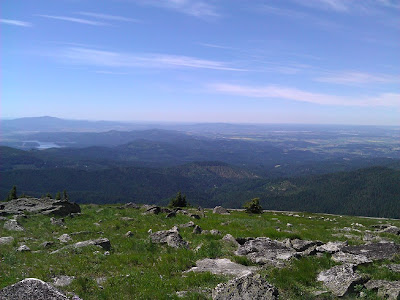 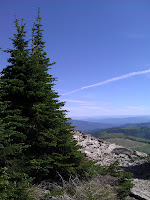 This pic and the one above are from atop mount Spokane where the snow was still hanging around and the temps didn't reach far into the 50's.  What A View!  For a family that had just left a hot 95 deg southeast with 105% humidity this was a shock to the system but well worth the drive.  There was a ski lift to the top of this mountain and I am sure during the season this run down the mountain would be great.  I absolutely love the mountains. 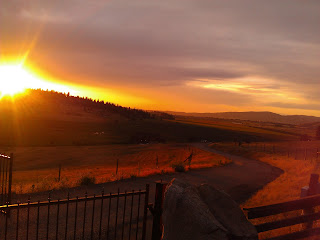 And then there is these two views which were just down the road from my brothers place.  I caught these pics just as the sun was setting against the mountains and poppy fields.  The golden color and bright greens were just down right amazing.

And finally I leave you with a doodle I did the other day because, well this is a fly fishing blog and you need a fish to keep that status.
Posted by Unknown at 9:52 AM

Beautiful and you're right the kids will look back and smile.

Cofisher - thanks for checking in. The kids realy enjoyed the trip
Fontinails - I thought t was as well but tried to logon and no luck. No worries, glad to be back on board.