Cutthroat On The Idaho Coeur d'Alene 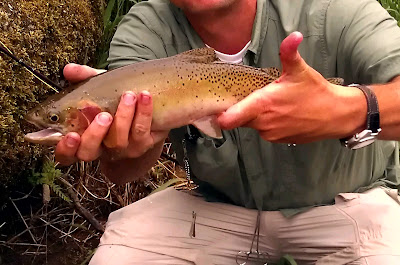 Fishing the upper Coeur d'alene river in norther Idaho was a Blast as you can see from the picture montage below.  I did this with my brother on the last day of my family vacation out west and it was worth the wait. 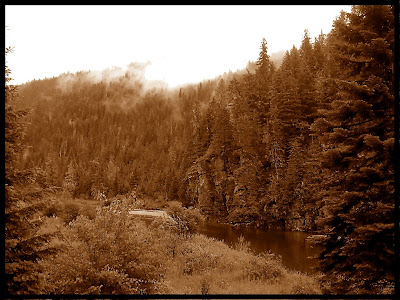 On my brothers coffee table is was a large book on the history of the Northwest and it was filled with photos just like this.  Beautiful trees and rivers with that typical mountain cloud cover hovering in the trees.  I felt like I was entering a movie period piece and somehow I just knew the day was going to go well. 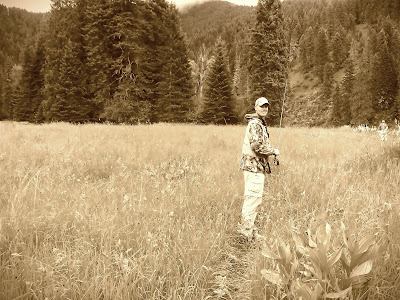 When we awoke early in the morning in Spokane the soft rain was falling outside and the weather channel was calling for a drizzle all day.  Needless to say my dad elected to stay at home with the kiddos and not aggravate his cold with the damp conditions and wet wading in a snow runoff river.  So my brother and I headed out alone.  Our first spot was a stretch of river recommended to me from the guy behind the car rental counter in Spokane.   He had noticed my original fly road case from HexFishing.com (Shameless Plug) and while I was driving the car around my wife did her best to sell him on getting one of those cases for himself.  When I returned the ensuing conversation led to this spectacular lead. It was a great little run with a 45deg bend that babbled itself into a deep pool that hugged a solid rock cliff.
Due to packing constraints I chose to leave my waders at home in SC and brave the cold waters like a fisherman of  the old days when waders were only for the rich.  It was a cold first step into that river but with the adrenaline of that first take from the surface my blood warmed me up.   My brother and I hooked a number of these beautiful cuts here on dry midges and yellowish olive sulfurs but the vast amount of strikes came from what has developed into my favorite fly - the Black Nose Dace. 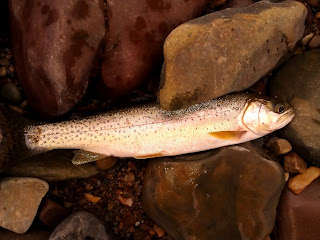 I have a variety of these little guys in my box at all times and they always do well.  They often are tied a bit different from each other, some with black ribs, some with a bit of yellow buck tail, others with a brown or red nose, some with a tag of red or black and others so sparse of hair that if I didn't know better I would just pluck it from the box and toss it in the trash.  Why do I like these little minnow imitations   Honestly, I am not a very good master of the presentation and this streamer is a great way for me to hide my faults with fish. 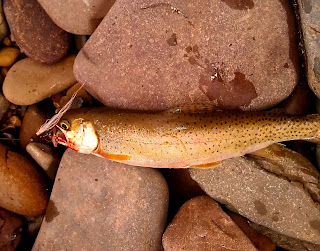 One other reason is the tug one feels when a fish attacks the fly.  This fish hit the fly so hard and in the current that it added a bit of red blood to his already red cut.  He still had a lot of fight in him when I released him so I hope he survived.  If not then he just became food for one of the many forms of wildlife around the area. 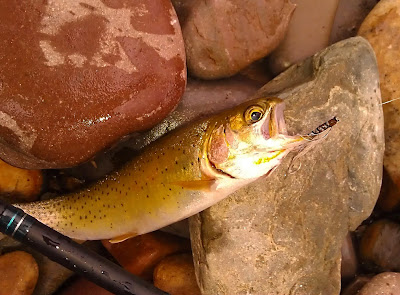 Most of the fish we caught were all in the 6-9in range but man they are fun.  Every one of these fought like a champ with so much head bobbing and dancing one might have thought he had a fish twice the size on the end of his line. 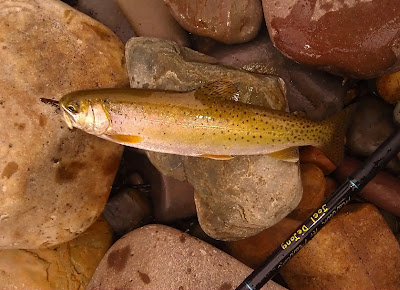 Our next section of river was about two miles up stream and just around a bend in the road.  I saw how the river took a sharp turn with a number of runs and bends up stream then cut far back from the road and against a mountain and out of sight.  We decided to pull off at the next turn out and fish this great looking stretch.  Up to this point I believe we had seen only about 3-4 other people in about as many hours and wouldn't you know it as we cleared a tree we spotted another truck with a big spey fly sticker in his window.
Not one to like to crowed out other fisherman I sat in the car and contemplated if I should even get out or just keep driving.  In the end I am glad I did.
The guy was a guide from Double Spey Outfitters on his day off. After a bit of small talk about the weather I told him I was an eastern on vacation and was wondering if he cared if my brother and I might fish part of this big bend and that I didn't want to crowd him.  "Sure"  he said, "I'm not going to stray to far from this road but back up a ways is some great water you guys can have."  He then proceeded to tell us were the fish were likely to be holding and what was the best flies to use.  After a bit more talk we parted company and after a short walk through an elk traced meadow we lost sight our impromptu guide and never saw him again.

After a brief dry spell we beat down the brush and hopped a few large trees to a run that was cutting into a deep bank way back from the road.  I perched myself on a downed tree that stretched out into the river about 20 feet and made two casts with my haggard Black Nose Dace.  Careful not to hang up on the big spruce behind me I kept my casts out over the water and then let the fly settle on the calm water about a foot from the shore.  Then a monster rose for my half submerged fly. 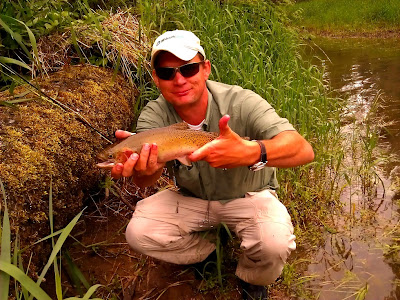 The best fish of the day by far.  It was also the last fish for me and that was okay with me.  A great trip, a great time with family and a great end to a great day.  The next morning with the family in tow we headed back to the scorching temperatures of the southeast, are memories and our photos to remind us of a trip to Eastern Washington. ﻿
Posted by Unknown at 8:41 AM

Wow - what an incredible day on the river.

Scenery, good company and plenty of sweet fish - now that's a nice way to wrap up a vacation.

Glad to see you enjoyed your time out West - Idaho is beautiful country!

Well done...looks like you had a great day on the water! Those cutts are some really cool fish.

I love the feel of this piece....perfectly aged...I felt like I was reading a "period piece." The pictures are amazing...

I practicaly grew up on that river, before the super-fund clean up.. I miss it. exellent pictures, brought back a flood of memories-

Very nice. Cutthroat are probably my favorite catch. Pics look great, thanks for the post.

Thanks for all the comments. It was a memorable trip with great fish and fun with family.
CA - wish i could make it out there more often
Texwisgirl - thanks for stopping by. Glad I found your blog and yes the weather in nw sure beats this southern heat
Sanders - they are beautiful fish and full of life
Emb - I felt like I was in a movie while on that river. Amazing!
FishTales- envious. Those cuttys are fun
Brianj - the surrounding environment wasnt hurting the overall experience. It was great water to fish
Jim b - fishing and family, what could be better
Bgrfsh - oh about 2500 miles from home but only 1.5 hrs from brother's house. Well worth the trip. Epic!
Loah - looking forward to doing it again!
Thanks again for all the comments. I should have a post up soon with a special video of me chasing down my own feather supplier... Funny if not a bit humbling.