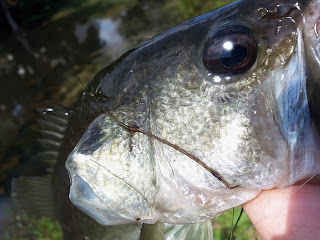 After a lengthy morning on the road bike traversing the back roads of Greenville SC, I packed the rod case and flies in the back of the jeep and headed a few miles down the road to hit a local pond.  I wasn't expecting much in the heat of the noon day sun but if I was going to get any fishing done before the kids got home from school then I had little choice.  Fortunately for me the fish were not effected by the timing.
I haven't been back to this pond in quite a while with all the things going on this summer so when I arrived I immediately noticed the weeds on the shore had extended their reach into the pond by a good six feet.  Now fishing with a backup 6wt since my fast action 7wt snapped on me early in the season (whole nother story) I knew fishing this pond might be a challenge.  (needless to say I am in the market for a 8wt salt/warm water rod) 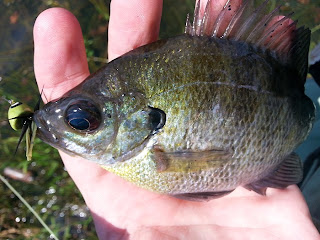 As always the gills in this pond are eager to provide a guy with enough action to make a few hours fishing exciting.  Taking flies and small poppers off the top are the bread and butter of these guys but patience is the key.  More often then not it is a waiting game.  You toss the fly out there strip it a few times and then let it sit.  Eventually you see a shadow emerge from the deep and check out the alien floating on the surface of his world.  If you are lucky he'll hit it hard and if your fly isn't up to snuff... well you got to see a fish but you'll never hook them.
Quite a few this day were hooked on a Little Green Diver #6 short with rubber legs and fluff behind the head. 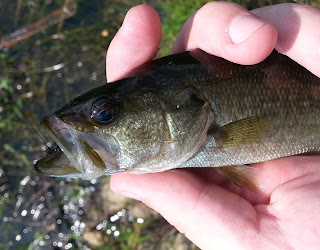 Next up I grabbed the standard Black Woolly Bugger with sparkle and marabou tail and tossed them along the weed beds.  As best as I could I tried to avoid the snags but as one would expect, the occasional cleaning of the fly as it hooked into moss is an ever present hazard.
First to hook into the Bugger was this little guy that darted from the cover with torpedo like speed.  I quickly learned that a slow pause retrieve was the order of the day.  I went through the gamete of speed and styles but the only hookups where with a slow action.  If I recall correctly this trend carries through most of the summer here in the south for warm ponds.  The lethargic bass just tend to avoid anything that will make them expend energy. 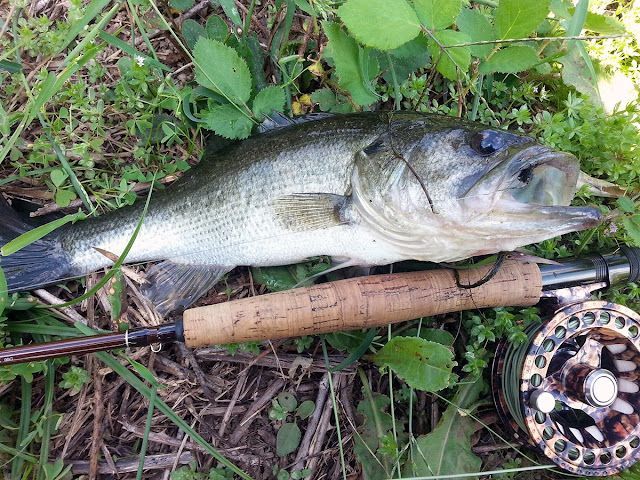 To finish the day I hooked into this 14in+ bass (I measured it) that took me for a quick ride, pulling my light 6wt double.  After that he shot for the bank and tangled up in the mass and weeds and the fight was over.  All that was left was digging him out but with a hearty leader and #3 tippet it was not difficult.
Incidentally those in the know might recognize the beautiful reel adorning this under-powered rod. That right, its the MFC Fly Reel I got from the OutdoorBloggerNetwork and Fall River Fly Rod contest last year.  With its large arbor and smooth action it is the perfect bass fly reel.  I even like the camouflage colors.  Officially it is a river stone paint job but to me it screams the bass fishing look... I hope Larry The Cable Guy doesn't sue me but --- Git R Done!
Posted by Unknown at 10:37 AM

Sounds like a fun trip. It's great to have place close by that can provide an afternoon of fishing and allows you to get home in time to see the kids.

Is your bike set up for fishing or do you lug the gear with you?

Leigh - now thats an idea but I'm sure to get some funny looks with a saddle holster for a fly rod on my road bike. Some down here in the south might think I'm packing a Winchester.

Hey, Joel, posts like this one are right up my alley so to speak. Actually, just down the road a bit from my home is some fun pond fishing. Quick trips means more fishing time. BTW, admirable reel!

Joel
Landing bass and bluegill with the popper is always a blast, especially when you are using a concave face popper, more action. thanks for shairng

Mel - the reel is great for this style of fishing. Nothing beats a quick trip to the pond and fins to show for it.

Bill - I could fish bluegills all day but only if they are nice sized. Small ones are fun but after a while you just need to see a big shell cracker pull the rod.