Big Bass - Pond Fishing - And I Break My Fly Rod! 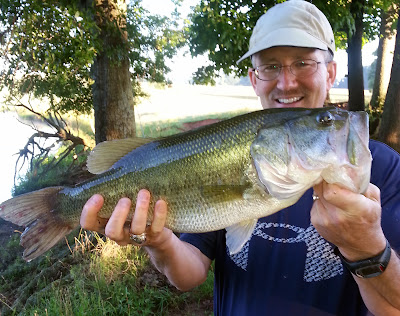 In my book there is only one good reason to get up early this time of year.  Of course there are many other reasons I DO get up early such as work and chores around the house but the only one I really get excited about is FISHING!
This past Friday I awoke early to go with my buddy - Marty - to a local private pond on a beautiful working farm.  I have heard him tell of massive fish and plenty of them in this pond so I was fairly excited.  As fish stories go, I was still a bit skeptical but hopeful that the pond lived up to his bragging.  After my first five casts and three fish to show for it I was a true believer.  Either we had hit this pond at precisely the right time or this was truly one of the best ponds I have been to. 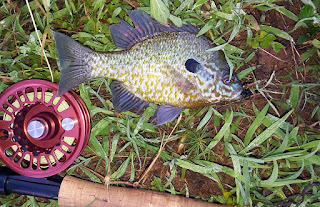 The ecosystem in this large pond was perfect.  Beautiful sunfish of all sizes and species, a wide range of bass sizes all of which look healthy (besides one that looked like a turtle had used him for a chew toy), and enough bait-fish and aquatic bugs to keep the whole food chain rolling.
Taking one of my favorite graphite rods - the one built by Marty - I strung up my Abel Fly Reel and went to work.  Quickly I learned that I was quite under prepared for the size of fish in this pond.  My  hooks and inch and a half streamers where not tempting enough for to many large fish but the mid sized fish were killing them. 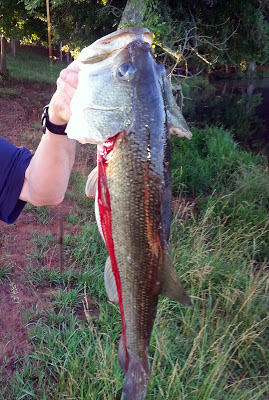 After hearing a large splash I looked over to see that Marty wasn't exaggerating about this pond one bit.  After a bit of a fight on his custom built spin rig he hauled up on shore one of the biggest 5lb bass I have ever seen.  He had hooked this bad boy just past the gill so it bled a little but after a quick hook extraction - I literately stuck my whole hand down its throat to remove the hook! - we released it back into the pond where it quickly swam away.
Tossing a 7in Sinko worm he had hooked into a bass most guys would chalk up as a bass of the year for them.  Then he returned to casting and after less than twenty minutes he did it again!  Another hawg on the line (a 5lb'er) and another hero shot to show for it.  Quickly I realized that I was out-gunned on this trip.  I was catching what would normally be respectable size bass but compared to the fish he was hauling in my fish would be considered bait.
Undaunted, I continued fishing and hooked into a whole lot of fish.  Finally I hooked into a very nice crappie making my day a small slam - Bass- sunfish - and a crappie on the fly rod.
Moving down the shore I tried to cast again and heard a snap.  Thinking that I had hit the fly on the graphite, I tried to cast again and heard an even worse snap.  I had broken my favorite Graphite 7w rod!!  Luckily Marty had come prepared and brought a second spin outfit.  With a little disappointment at having to retire my fly rod and Abel Reel, I picked up the spin rig and went to work. 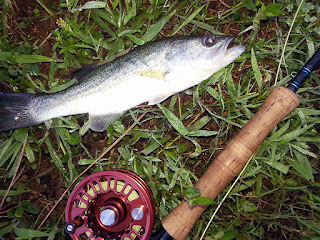 By the time I had broken my rod, Marty had hooked into three record bass and I had the bait covered.  Unfortunately the heat of the day was on the rise and the fishing began to slowly die off. I hooked into some great fish and Marty was still catching fish but the sizes where noticeably decreasing.
One fish I hooked into on the decline was a good sized bass with about a three inch gash taken from its back.  It looked as if something had taken a machete to it so of course I had to take a picture.  Not having any massive toothed creatures in a pond like this, quickly ruling out northern species like a pike, the only option was that a big turtle was trying to have a large meal of bass.  The fish was still very strong but I was not sure he would survive.  A cut like that is hard to recover from. 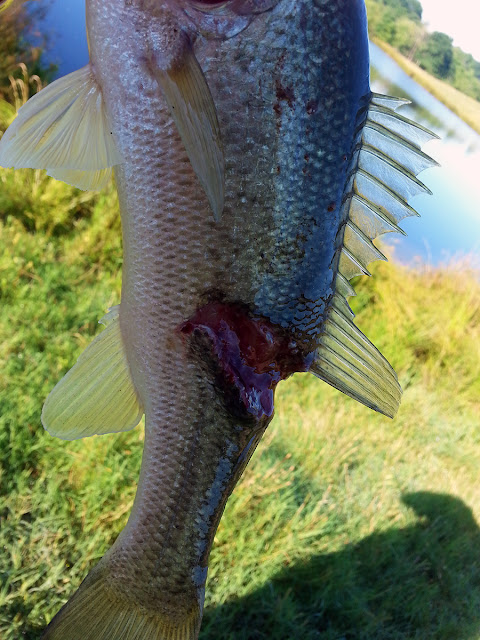 At about nine thirty we packed it in.  We had both caught many large fish - his being slightly bigger - but it was still one of the best ponds I have ever been to.  On the drive back I lamented on the loss of my rod he had built for me and he came up with a great outlook on the situation.  'Now you have a great excuse to build yourself a new one.' 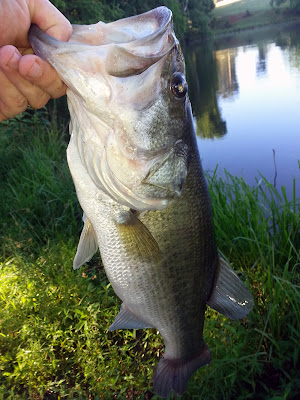 After dwelling on it a bit - all of two seconds - I knew he was right.  Securing his expertise and promise to help me find the right blanks and get me started, I knew another project was on the way that I had to somehow explain to the wife.  As it is I have about forty other irons in the fire so building a rod might be one project too much but I figured what the heck.  You only go around once, why not live it to the fullest and learn a little on the way.
For this Friday it was a a great way to end a week.  and with the fishing bug satisfied I can now start another week.  After that its a few family trips across the nation.  With any luck I will be able to do a little more fishing along the way. 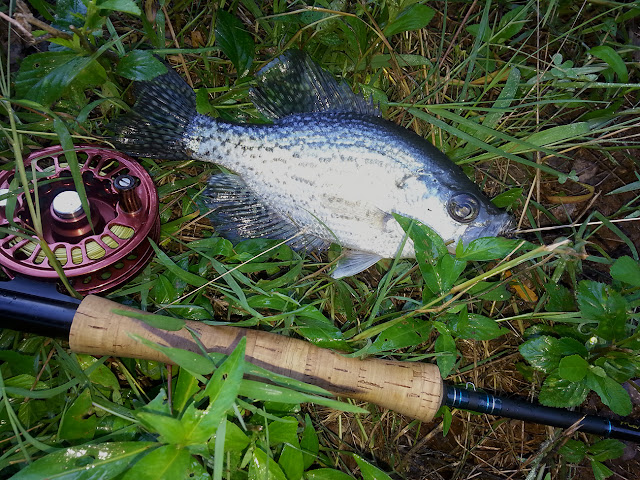 (This is the last fish caught on my 7w - nicknamed the Flying Dutchman)  Not a bad way to end a career.  Fair thee well old friend - you have caught many fish in your short 5 year life.  From cutthroats in Idaho to the bass of the south, well done... well done....
Posted by Unknown at 9:49 AM

I can't wait to see what the new rod looks like. With your artistic talent, it'll be spectacular.

Nothing worse than that snap sound. I've only heard it once but it is one you'll never forget. Nice post Joel and I certainly look forward to seeing the new rod.

That sucks about the rod. Those are nice fish for sure.

Mark / Howard - it might be a while before I start that project but I'm looking forward to it.

Kevin - I only wish I could have broken it on a nice big bass.

Brktrt - they were the best bass I've seen taken in one outing. Thanks

Looks like a great day out to me. Thanks for sharing it.

Daniel - can't think of many better ways to spend a morning. Thanks for stopping by.

riverwalk - I said that same thing most of the morning!

Your Grandpa would drool to have a day like that. Hope you had a happy Father's Day.

Those are some nice bass! I broke my first fly rod soon after I started fly fishing, and another one fell vicitm to a car door. It's kind of like losing a friend!