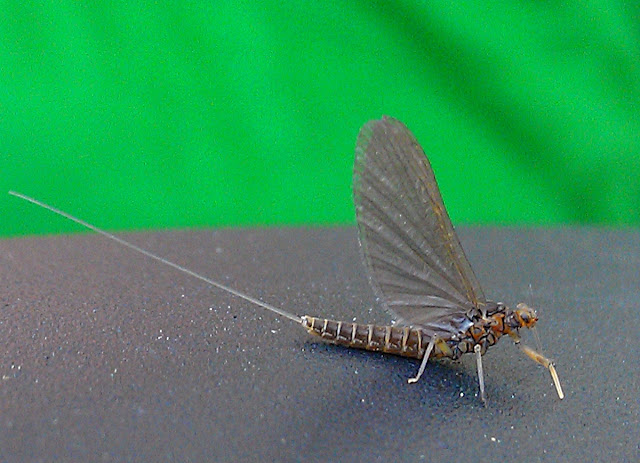 This weekend found me on the banks of the Mississippi River where I spotted this rare site; a beautiful May Fly in March.  I was having a beer on my in-laws deck in upper Illinois when I spotted this little guy.  I instantly began to snap pictures with my cell while my wife made sarcastic comments in the background.  Most people wouldn't call these bugs beautiful (my wife included) but to a fly fisherman these are a sight to behold.  I tried to explain that spotting these bugs so early in the year was a real event - especially in Northern Illinois - but that did little to impress her.  I guess to the not fly fishing public, these little guys will be nothing more than another ugly bug. 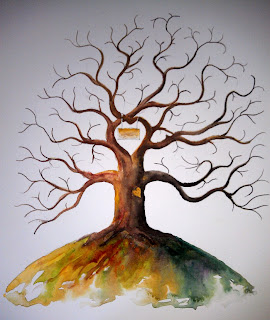 On the painting front, My sister-inlaw is getting married in a few months and she gave me a special project.  Instead of a guest book, she wanted a piece of art featuring a tree.  The idea is that the guests leave their thumb print as leafs on this tree, so the other day I spent a few hours painting this large tree.  My wife then found  a selection of ink pads for the guests to use to decorate the tree.
When she first mentioned the project to me I was a bit confused but after she explained it to me I began to get the vision in my own mind.  I hope it turns out like she imagines because if it does then she won't have thirty years from now some forgotten book with a bunch of names but a piece of art to hang on her wall for years.  I know that this has nothing to do with fishing but I thought that I would share it with you anyway.
Posted by Unknown at 11:24 AM

Nice Gordon pic you got. This winter has all the hatches out of wack. I wish I could paint so well. Very nice.

That is a great idea your Sister-in-Law has. Nice to have something a little different at a wedding. I'm sure she'll love it.

Johnny Utah - It makes you wonder how the summer is going to be. I bet its going to be a hot one.
Shoreman - Thanks Mark, It is a better idea than having the standard guest book.

Mayflies. I think I remember a story of when you worked at a job in highschool and had to snow shovel them out from under a street light by the millions. I guess they have grown on you a bit.

John, that is so true. That was in June during the hex hatch (shad flies). I can also recall them using the snow plow to get them off the bridge. Those are much bigger than this little guy and a different species of mayfly but they look pretty much the same.