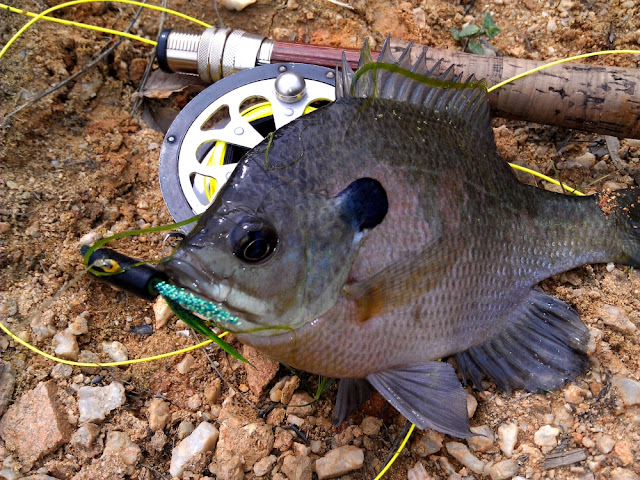 Some of you might have been wondering where I had gone.  It has been well over a week since my last post and to be quite honest it was not only work getting in the way of me posting, It has also been the fact that I was feeling a bit down in the dumps with my fishing so far this year.  I have been out on the water over a dozen times this year so far and as of yesterday I had failed, and failed miserably, to hook into any gills.  I mean I have been seriously lacking in ANY hook-ups and I was feeling really bad about not being able to post one single fish photo on this blog since late last year.  After all this is a fishing - and art - blog.  But without the fish my inspiration lacks a little something. 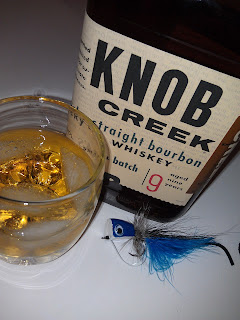 That all changed yesterday when a friend took me out to set up a turkey blind, pop off a few shots in preparation for the upcoming season, and wet a fly in the farm pond nearby.  So loading up my 4 weight, a box of bass bugs, my Remington 870, and enough ammo to start the Civil War all over again we headed out.  I was eager to try out my new shotgun but when I saw the farm pond I kind of forgot about the guns and the turkeys.  All I wanted was a chance to redeem myself with a gill on the end of my line but that had to wait since after all the main purpose of the trip was the turkey blind and sighting in the guns.
Grudgingly I left the pond behind and helped load the tools back into the woods where we set up a prime spot for targeting gobblers emerging from a stand of pines.  After checking the game cam and clearing a field of fire we headed back to the truck where without waiting to see what my buddy wanted to do, I grabbed my four weight and hoofed it over to the pond and immediately started to cast a few new bugs I had recently tied.  I was hopping for a big mouthed bass but the first hit surprised me even more.  I had tied on this mega popper I carved out of wine bottle cork, blue fluff, and a leather tail.  All this was on a very large sized stainless hook.  On the fourth cast something exploded out of the water and sent my huge popper flying through the air.  Frankly I was a bit surprised since I honestly wasn't thinking anything would hit such a garish and over-sized popped.  I was really only fishing it because I wanted to see how it performed on the water.  After all I had spent a whole lot of time on shaping the wine cork, painting and tying it up, the least I could do was fish it right? 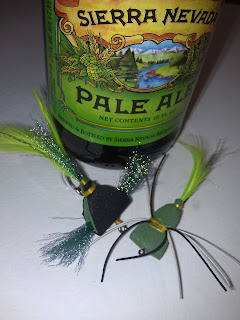 Well after a few more casts with no result I resigned myself to the fact that it might have been to hopeful to actually hook into something with such a big profile so I switch it up to another creation of mine simulating a frog.  I had created this pattern for just this type of pond and thought that if the popper got a good response, the least I could do was toss a frog into the mix.  This frog was tied with the same size hook (Mustag #1 2x Large) as the popper but with the foam I was hopping that it might be easier for a fish to take instead of tossing it into the air.    What I never thought was that such a large hook would be taken by a bluegill.  I mean it was a 2x #1!!  Its a big hook, but that is exactly what happened.  When that bream took that popper it was as big an explosion as any bass I have ever had.  I know what some of you are thinking, "Why is this guy so excited about a common bream?"  Well to them I say, you go fish-less for nearly three months and begin to contemplate why you even head out to practice fishing futility and then you will understand why a single bream gets me excited.  I now have that fish 'stink' on me and hopefully its enough to continue the rest of the year. 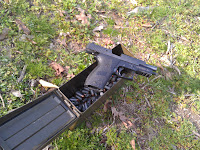 Well after only about ten minutes of fishing I was urged to go and fire off the guns.  We packed the fishing gear away and drove off across the farm to the 'gun range' where we sighted in the guns, fired a few fun shot at a stump, and then practiced cutting down saplings with various fire arms.  The Remington 870 performed wonderfully with a turkey load and the fun with my buddies 45 was a great way to spend the rest of the afternoon.  I could have stayed all day at that pond and perhaps I will return with only my fly rod but for that day, the ten minutes with a rod in my hand and a single fish on was enough to renew my faith in my abilities as an angler.  Hopefully I will not have another fish-less streak but If I do I just need to remind myself that they never last forever and the fish will one day return to brighten my day.
Posted by Unknown at 12:50 PM

Oh how I know that feeling! Just that one little gill can restore so much faith.

I think the only thing that makes it better is the fact that it was top water!!

The first one is always the sweetest.

That looks like time well spent. Nice gill. Especially for this time of the year.

Hey Joel, how about a painting of a big fat Tom feeding? I'm glad you go out. I'd love to try turkey hunting.

Brookfield - Hits on the top always make me excited. I love seeing fish jump and know that I got them.
Shoreman - Just wish it didnt take so long.
Kevin - great big purple bream. Cant wait to see how big they get throughout the year.
Howard - No thats an Idea. I got a Mallard already in the works but Id love to get a tom from one of my photos

A nice fish and a good beer...not sure it gets much better!

Love the 870 for turkey. It shoots a sweet, tight pattern with a super-full choke! Nice fish! Glad you broke the "ice."

I'm gonna give turkey hunting a try this year for the first time... I also noticed two of my favorite beverages....sounded like a great time..